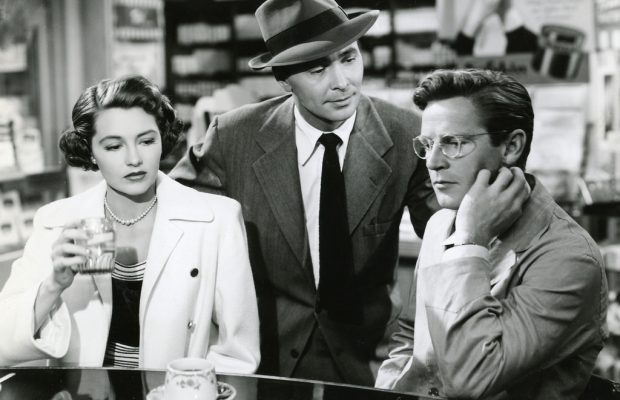 Toronto Film Society presented Tension (1946) on Monday, August 19, 2019 in a double bill with The Chase as part of the Season 72 Summer Series, Programme 6.

Toronto Film Society presented Tension (1946) on Monday, July 31, 1978 in a double bill with The Big Heat as part of the Season 30 Summer Series, Programme 4. 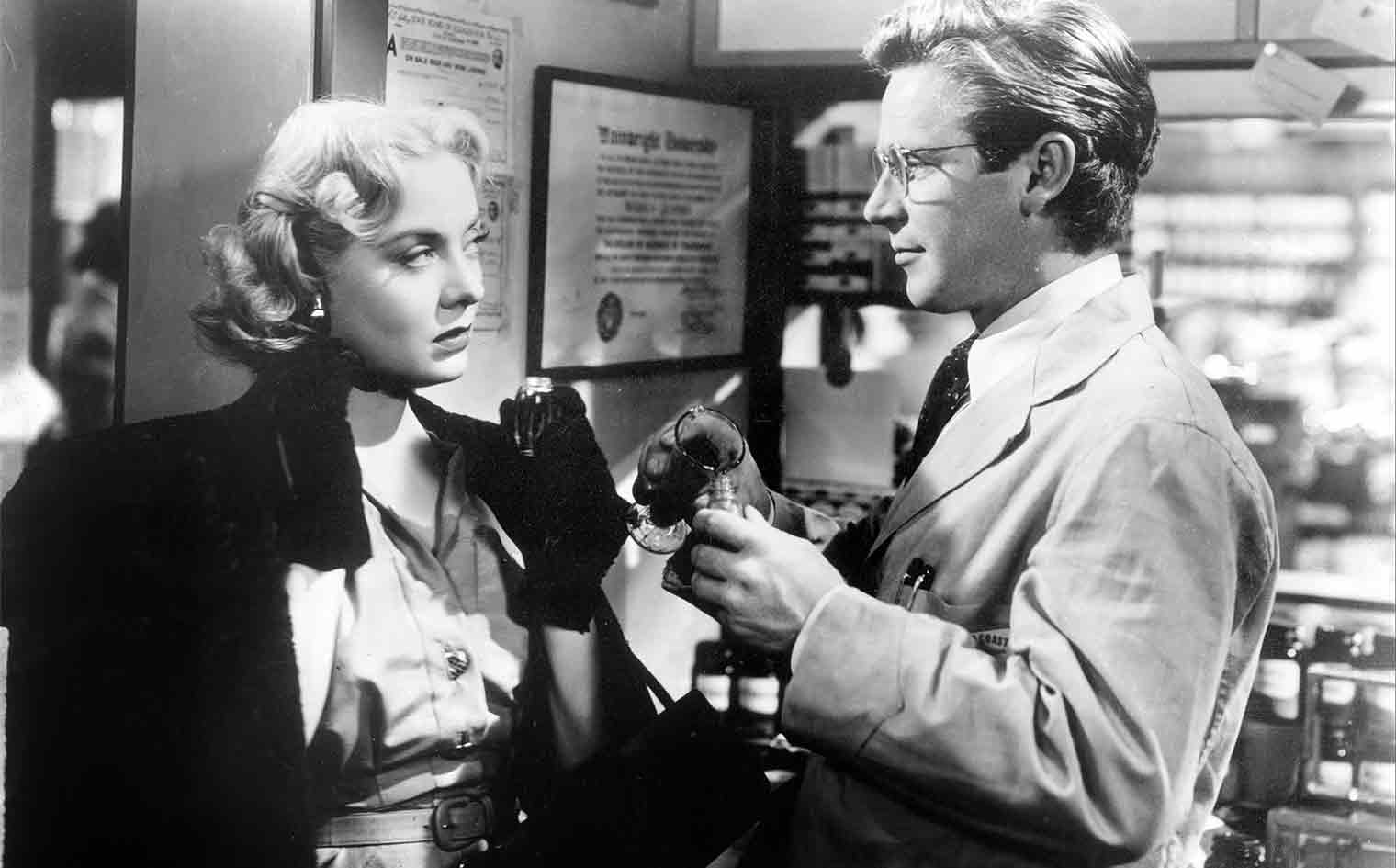 For us film buffs here and in the know, one of our favourite bad girls of the screen is Audrey Totter.  Born in Joliet, Illinois on December 20, 1917, Audrey began acting in film at the age of 28.  Well, perhaps it took her a bit of time after her debut in 1945s Main Street After Dark and second film Dangerous Partners, since only her voice was used in the following two films of the same year, Bewitched and Ziegfeld Follies.  Then in 1946 Audrey played one of her rare good girl roles in The Cockeyed Miracle and followed that with the lead in Robert Montgomery’s solo directorial debut, Lady in the Lake.

At the start of WWII, Audrey was an unknown commodity in Hollywood but by the end of the war she was catapulted into stardom due the exposure of her cheesecake stills.  Until Audrey’s show biz aspirations paid off, she did a number of odd jobs to make ends meet including working as a door-to-door saleswoman canvassing the streets hawking floor wax.  Even this experience benefited her when it came to her acting passion.  Audrey said, “I go inside every kind of home and I picked up a lot of new dialects that I thought would come in handy when I started to act.”  Her friendly chatter, though, could also get her in trouble when she let her potential customers know she was actually interested in becoming an actress.  When one elderly woman heard about Audrey’s desire to enter what she thought was a tawdry lifestyle, she ushered Totter out the door.  “The old gal told me I didn’t look like a wicked woman, but she allowed as how you can never tell,” Audrey mused.  Perhaps the woman was predicting her screen future!

In the early 1940s, Audrey was able to shelve the floor wax and got her foot in the door of playacting by becoming a voice actress on radio programs.  A natural at comedy, she employed her traveling saleswoman background to good use and became a squawk box sensation in New York with her comedic turn as an Ingrid Bergman impersonator.  Although eager to act, she got work touring with the My Sister Eileen Company, but it was the radio programming that established Audrey in the business.  Hollywood scouts, while scouring the east coast for talent, found Audrey just as amusing as her radio fans did.  And with her good looks to complete the entire package, Audrey had no problem impressing the MGM folks who made people’s dreams come true.

She became a pinup girl when MGM decided she would be just as impressive as Jane Russell who was managed by Howard Hughes, and who refused to loan Jane out to other studios.  So, Totter’s leggy and buxom publicity stills were sent out to soldiers across the world and with the feedback that MGM received when the servicemen wrote back fan letters, the studio nicknamed Audrey “The Whiz Kid.”  After the war, photographs printed of her in the “Salt Lake Tribune”, referred to her as “Postwar Pin-Up Girl #1.”

A famous flyer of the day, Henry Myers, who gained notoriety for ferrying Roosevelt to Yalta and Eisenhower back to the States, was reported to be Totter-obsessed.  He supposedly haunted the Hollywood Canteen, simply to meet Audrey and bestow upon her some treasures he had obtained during the war.  Myers wanted to lavish his pin-up goddess with jewelry he acquired while serving in Paris.  We can only imagine what Audrey might have thought of this attention.

Audrey married Dr. Leo Fred, assistant dean of the UCLA School of Medicine on September 20th, 1952.  They had one daughter and their marriage lasted until his death on March 12, 1995.  Audrey lived another 18 years, dying of heart failure just 8 days shy of her 96th birthday.  She was cremated and her ashes were scattered at sea.

Sourced from The Pin-Up Girls of World War II by Brett Kiser (2013), IMDb and Wikipedia 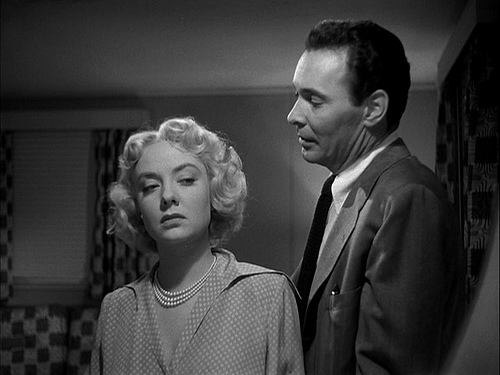 The immediate post-war era was a high-water period for American motion pictures. Realizing that audiences, many of whom were recently returned from the realities of war, wanted films far different from pre-war and wartime escapist fare, the studios responded with a vengeance. Such classic films as The Best Years of Our Lives, Gentleman’s Agreement, and Home of the Brave, to name a few, held up a mirror to contemporary American problems: returning veterans, antisemitism, and racial prejudice, respectively. Another genre of this rewarding era was film noir. Disregarding the traditional clean-cut characters and obligatory happy endings of traditional Hollywood fare, film noir presented a bleakly pessimistic view of people and life, with characters who represented the darker side of human nature. Perhaps Billy Wilder’s classic Double Indemnity (1944) could be identified as the start of the cycle, followed by such memorable films as The Killers, Out of the Past, and The Postman Always Rings Twice.

Tension was produced at the height of the film noir period. Likely it was made with the reluctant approval of studio czar Louis B. Mayer, whose taste ran to frothy musicals, period pieces, romances, and “family” films (such as the Andy Hardy series). Mayer commented on one of his studio’s greatest films, The Asphalt Jungle [which TFS will be presenting on Sunday, October 6, 2019, in Programme #1 of the Season 72 Fall/Winter Film Buffs Series]: “This is a nasty little film about nasty people doing nasty things.” However, Mayer had his masters (MGM President Nick Schenck and the Board of Directors) and, spurred on by competition from other studios, gave the reluctant nod to pictures such as Tension. 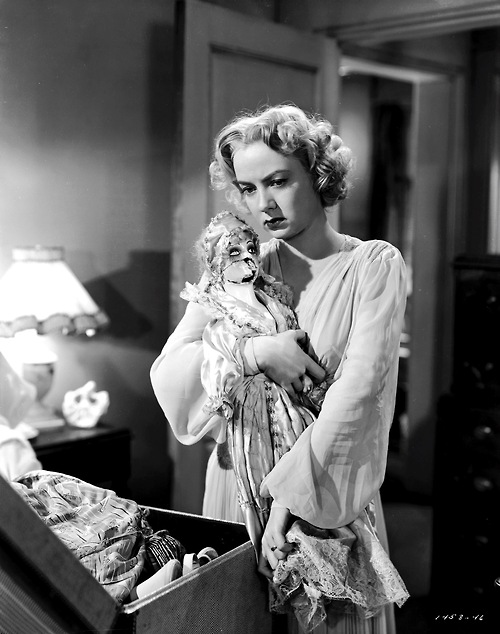 The story is a familiar but ever-fascinating one—that of a drab, insecure, unsuccessful man planning revenge on his beautiful but unfaithful wife. In this case, the cuckolded husband is played by Richard Basehart, a good actor who, perhaps because he was so frequently cast as a loser, never quite scaled the heights of stardom. In Tension, Basehart is an innocuous drugstore salesman who plans the perfect murder of his wife’s lover. At the last moment, he loses his nerve and fails to go through with the crime. When his intended victim subsequently does turn up murdered, Basehart is the natural suspect. From this point, the tension of the title builds up as to whether the actual murderer will be discovered before Basehart is found guilty and, presumably (this being 1949), executed for a crime for which he is guilty only by intent, not commission. Barry Sullivan, another fine and under-appreciated actor, plays the investigating police officer, a role which he frequently played. Sullivan is also the narrator of the story (a familiar device in film noir), making observations on human nature. “Everybody has got a breaking point. And when they’ve been stretched so tight they can’t take it anymore,”—he demonstrates graphically by snapping a rubber band. Tension’s director, John Berry, seems to have had a relatively short career between 1946 and 1959. Probably his most memorable film was John Garfield’s last picture, He Ran All the Way (1951). Tension was photographed by one of Hollywood’s leading cameramen, Harry Stradling Sr., with music composed by the rising young André Previn. Thus, although it may be assumed that Tension was hardly one of L.B. Mayer’s favourite films, it nevertheless benefitted from a competent cast and technicians.

Film noir as a genre seems to have vanished for good from moviemaking. Perhaps it’s just as well, for it is so strongly associated with the 1940s and early-1950s that it really belongs to that era. In any event, through films such as Tension, we can relive that atmospheric and memorable period.