Toronto Film Society presented The High and the Mighty (1954) on Sunday, September 22, 2019 as part of the Season 72 Sunday Afternoon Special Screening #1.

Usually I don’t recommend reading film notes before watching a film just in case major surprises are revealed, but if you’ve already read today’s notes, it will only enhance what you’re about to see.

Before Robert Stack was hired to play the role of co-pilot John Sullivan by the director William Wellman, John Wayne, wearing his producer hat, wanted Robert Cummings for the role, for the sole reason that in real life Cummings was a pilot.  Likewise, roles initially offered to William Boyd, Keenan Wynn, and Lionel Barrymore were ultimately filled by reliable stalwarts Sidney Blackmer and Paul Fix.

Karen Sharpe, who plays wife Nell Buck, said that she almost didn’t get the role.  When Wellman found out that Karen’s agent took her over to see the assistant director Andy McLaglen who thought she would be perfect for the part, Wellman had a fit.  He didn’t want her to do the test, but as she was already on her way to the studio, they had no way of reaching Karen to tell her not to come in.  And since her agent was with her, had already signed the contract, Wellman had to acquiesce.  This turned out to be a good thing especially since the actress who was supposed to do the test opposite the actor John Smith who was playing the husband was pulled at the last minute due to discrepancies in her fee.  Gutsy, crusty, egotistical Wellman found his Nell and Milo Buck without even looking at the footage.  Because of this film, Karen Sharpe went on to win an award for the most promising newcomer against such actresses as Shirley MacLaine and Kim Novak.

Robert Stack recalled that everyone was afraid of William Wellman, but in truth he was a “marshmellow”.  Doe Avedon, who plays Miss Spalding, couldn’t keep her knees from wobbling and when Wellman discovered it was because she was afraid of him, he told her not to take him seriously.  He was never cruel, but he would pressure actors to make sure that the realism of the situation always came through.  However, since most actors feared him, Wayne had the director’s chair embroidered with the ironic words, “Sweet William”.

So, with that, we hope you enjoy The High and the Mighty.

Sourced: Ladies of the Western: Interview with Fifty-One More Actresses from the Silent Era to the Television Westerns of the 1950s and 1960s by Michael G. Fitzgerald and Boyd Magers (2002); John Wayne: The Life and Legend by Scott Eyman (2014) 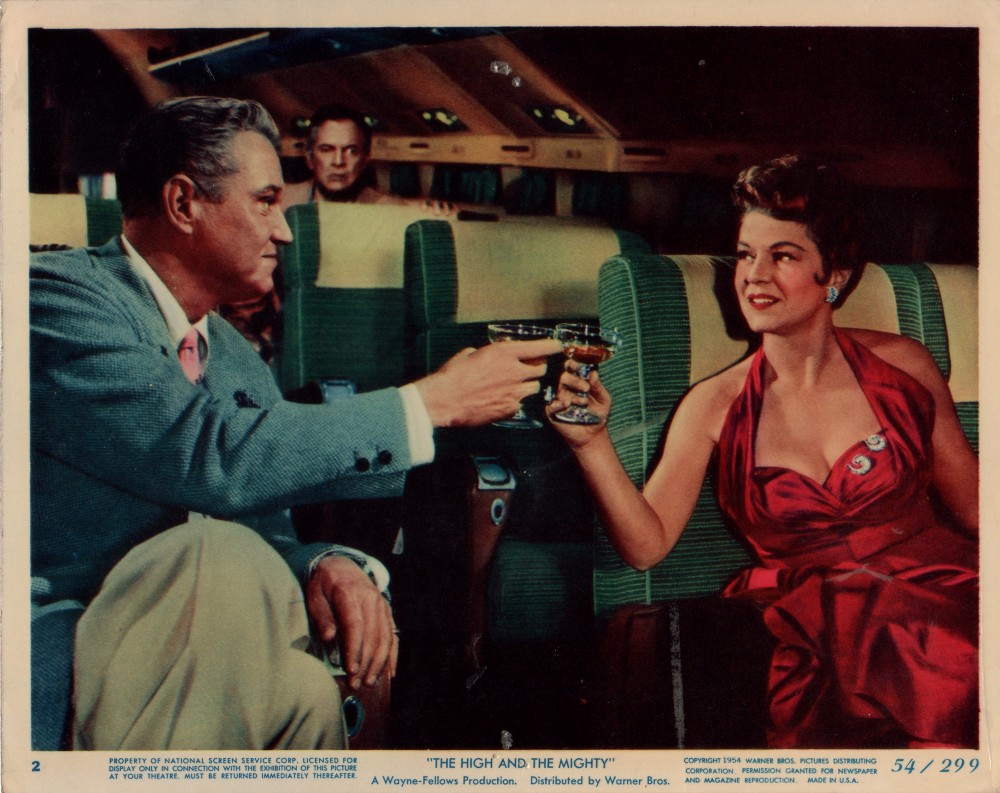 In Jean-Luc Godard’s Contempt (1963), Fritz Lang quips that CinemaScope “wasn’t made for people. It’s only good for snakes—and funerals.” It’s not surprising that an artiste like Lang would neglect to mention how good the elongated frame was to the box office in post-war Hollywood. Twentieth Century-Fox’s The Robe (1953) spearheaded the studio system’s coordinated effort to pry people from the small screens that had seemingly appeared overnight in living rooms across the nation. (By 1955, 43 million TV sets had already been sold in a country with a population of 172 million; one set per four people.) CinemaScope promised an immersive, colourful experience—early industry advertisements for the process went so far as to describe it as three-dimensional—by projecting with an anamorphic lens onto a massive, curved screen along with booming, 4-track, stereo sound. CinemaScope was the most successful effort in the war on television, beating out the far more cumbersome Cinerama and dual-strip 3D processes, both of which—among many other logistical issues—required multiple cameras and projectors along with the skilled tradesman to keep everything in sync.

The High and the Mighty was precisely the right kind of material to take advantage of the grandeur of CinemaScope—commercial airliners, it turns out, are just as appropriate as snakes and funerals. It’s a star-studded action picture based on a best-seller; directed by 30-year-film-veteran and former fighter pilot William Wellman; and produced by John Wayne and Robert Fellows—their fifth film production. Although Wellman and Wayne’s paths did briefly cross in the early-’30s when the actor, in the nadir of his career, had uncredited roles in Wellman’s Central Airport (1932) and College Coach (1933), their collaboration really began with 1952’s Island in the Sky. Also based on an Ernest K. Gann novel about a disastrous flight, the film was a solid hit and solidified a partnership that would continue with four more films.

In his book “Wild Bill Wellman: Hollywood Rebel”, William Wellman Jr. detailed the convoluted journey to cast the ensemble picture. The lead was agreed upon immediately: Spencer Tracy. The parts of May Holst (the former actress) and Sally McKee (the anxious woman en route to meeting her fiancé for the first time) were either too minor or too “mature” to interest Joan Crawford, Dorothy McGuire, Ginger Rogers, Ida Lupino, Barbara Stanwyck, or Loretta Young. The former role ultimately went to Wayne’s reliable co-star Claire Trevor, who had appeared with him in Stagecoach and Allegheny Uprising (both 1939), and Dark Command (1940). Jan Sterling landed the latter role. Both actresses earned Academy Award nominations in the process,

for Best Actress in a Supporting Role. Tracy ultimately backed out of the project. According to Scott Eyman, in “John Wayne: The Life and Legend”, it was most likely due to a violent feud with Wellman two decades prior. According to Wellman himself, in Richard Schickel’s “The Men Who Made the Movies”, Tracy thought the script was “lousy”. Whatever the reason, the role fit Wayne perfectly and he lends the film an understated authoritative presence. But there was one cast member whom the director praised unambiguously as “the greatest actor I have ever used in my whole life”—his young son, Michael Wellman. Who could argue with Wild Bill?

The High and the Mighty got its fair share of turbulence from the critics but, overall, its landing was smooth. The New York Times’ Bosley Crowther described it as “artificial and contrived”, writing that “…it rocks and buffets and bounces across the wide screen for more than two hours, spitting fire, tossing propellers, and strewing emotional wreckage all over the place”. Mae Tinee of the Chicago Daily Tribune was more generous, writing that this “Grand Hotel of the air” had “…[an] ample amount of entertainment value”. Harrison’s Reports complimented the immersive qualities of the drama: “…One feels as if he is present at a real-life occurrence. The CinemaScope process is a major factor in the achievement of the realistic result.” Variety reported that, while certain unspecified airlines were protesting the film, the president of United Airlines, William A. Patterson, gave the movie perhaps its most important review, praising the portrayal of a skilled and confident crew. As for their staff review, Variety, in its inimitable jargon, called it a “…socko piece of screen entertainment”.

Dimitri Tiomkin’s Academy Award-winning score, with its poignant, whistled melody, is the film’s linchpin. Several versions were recorded and placed high on the Billboard Pop Chart, including Les Baxter & His Orchestra and LeRoy Holmes & His Orchestra (featuring famous blind whistler Fred Lowery). Harry James’ band recorded a version with the melody played on trumpet. Several vocal versions were issued; most notably one by Johnny Desmond.

While the production suggests a film of big heroics, The High and the Mighty works by concentrating on the intimate moments of human drama. The passengers are hurtling through space with their petty neuroses and mundane problems at fever pitch. As their lives face peril, their emotional baggage (along with their actual baggage) is sucked out of the plane into the darkness. This story template of an ensemble cast facing spectacular doom was repeated ad infinitum over the next couple of decades in the disaster film genre; most famously in the Irwin Allen productions The Poseidon Adventure (1972) and The Towering Inferno (1974) and, of course, Ross Hunter’s Airport (1970) and its sequels (and parodies).

This over-familiarity may detract from the effectiveness of the film, but the last act of The High and the Mighty still packs a punch to a jaded audience. As Wayne pilots the damaged plane on its last bit of fuel, he plaintively says, “Now I lay me down to sleep….” There is a cut to an aerial shot by second unit photographer William H. Clothier, accompanied by an angelic passage from Dimitri Tiomkin’s score. In an interview with Scott Eyman, Clothier singles out this moment and recounts Wellman’s profane reaction upon seeing the rushes: “I have just seen the greatest goddamn shot that was ever made for any goddamn picture in the world.” Amen.