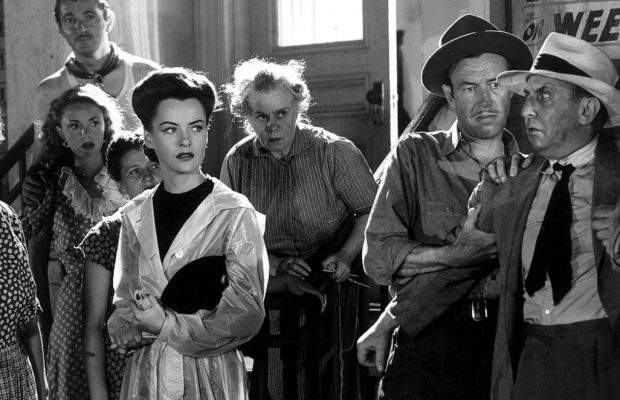 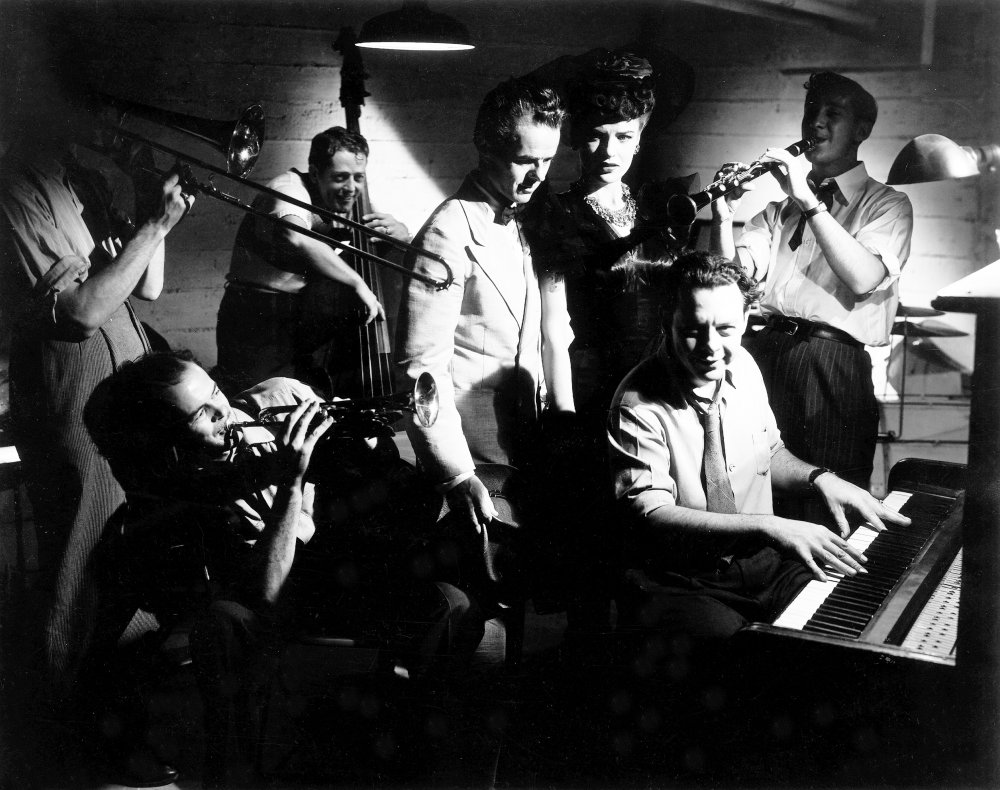 The year 1944 was a busy one for Director Robert Siodmak.  For, in addition to Christmas Holiday and Cobra Woman, he directed the film noir Phantom Lady.  This was an adaptation of a pulp novel by the popular writer Cornell Woolrich, whose stories were responsible for a multitude of films both in the classical period and thereafter.

First-billed in this mystery film is Franchot Tone, whose career in the 1940s had lost the lustre of his success in the 1930s.  This intellectual charmer had been a founding member of The Group Theatre in New York before he reached Hollywood.  His MGM co-star, Joan Crawford was swayed by his appeal.  But while dallying with Joan he was loaned to Warner Brothers, where he starred opposite Joan’s rival, Bette Davis.  Davis won not only an Oscar for the film, but also the intimate affection of Mr. Tone.  In the competition for Franchot Tone, Joan won the battle, for they married.  Miss Crawford’s career progressed faster than his, and by 1939 he was on the loose again. By this time, he had made two of his landmark films, The Lives Of A Bengal Lancer and Mutiny On The Bounty, both 1935.  Miss Crawford continued to be his friend, advising him, apparently inadequately, in his love life.  His obsessive infatuation with blonde starlets Jean Wallace and Barbara Payton led to two more unsuccessful marriages.  His relationship with Miss Payton, turned infamous when the press gleefully reported that actor Tom Neal, an admirer of Miss Payton, had seriously damaged Mr. Tone in a barroom brawl.   Franchot Tone’s last notable role was in Advise And Consent in 1962 as the dying President of the United States. He worked steadily on TV until his death in 1968.

Franchot Tone admitted that Phantom Lady really belonged to co-star Ella Raines.  She of the widow’s peak and the brunette pageboy.  Raines had come to Hollywood by way of a private contract with director Howard Hawks, whose relationship with her was more than professional.  Her beauty was undeniable, but, strangely enough, although she had a busy private life, her image on the screen remained peculiarly wholesome.  In Phantom Lady, the advertising posters sported full-length images of her in a slinky gown.  Was nobody aware that her role was that of the detective? She was wholesome again in Preston Sturges’s Hail The Conquering Hero, and even in two other films noirs directed by Robert Siodmak, The Suspect and The Strange Affair Of Uncle Harry. She was a suitable lead opposite John Wayne in Tall In The Saddle.  But in the very consistency of her acting, she spelled her professional doom.  For her perceived lack of versatility led to an abbreviated career.  Most agree that she was at her best in Phantom Lady.

Finally, Aurora Miranda is indeed the sister of Carmen Miranda. 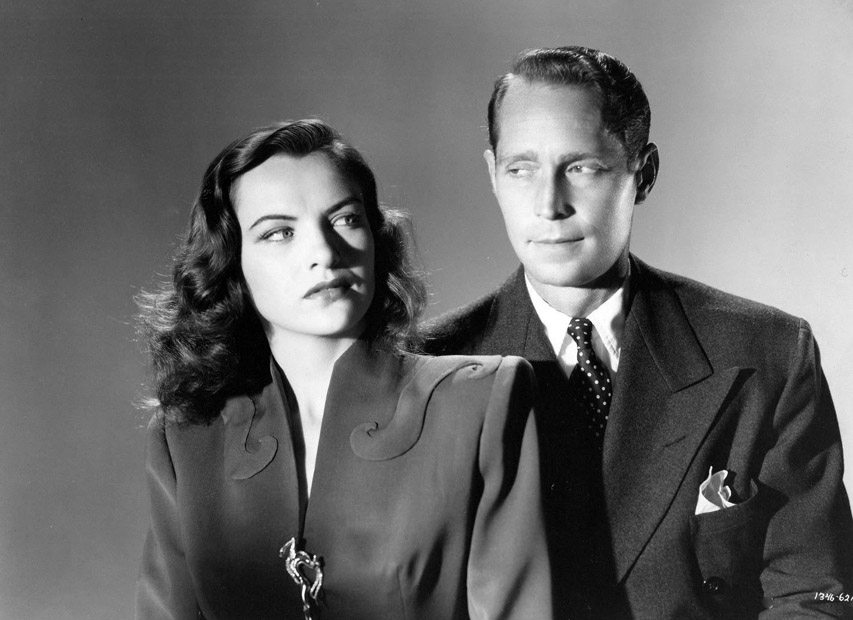 Raymond Durgnat has pointed out that Phantom Lady is one of a deluge of films made in the ’40s in the United States about portraits and missing women, including Laura; One Touch of Venus; Portrait of Jennie; The Woman in the Window; and The Dark Corner (Clifton Webb trying to equate his painting of the ideal woman with Cathy Downs). The theme intrigued Hollywood and was that of a man who was fascinated by the idealized image of a woman. The men who adhered to the ideal woman and ignored the real one usually suffered a severe downfall. In Laura, Dana Andrews makes the change easily. (Who wouldn’t? Gene Tierney is pretty close to the ideal—except, it’s pointed out, she lies a lot.) Clifton Webb prefers the ideal and goes down for it. In the ’50s, Hitchcock, in Vertigo, picks up the theme and continues to modify it. This time, it is not the man who goes down but the ideal. (Literally, Kim Novak, in her “ideal” disguise, falls from the “ivory” tower.) It was up to The Pyx to pick up from where Hitchcock left off—on the ground with the dead woman’s body. This time, we deal strictly with the real woman, albeit in flashback, who comes to fascinate Christopher Plummer, the policeman-investigator. There is no chance that the woman, Karen Black, can come alive like Gene Tierney—the real/ideal split is definitely out. Not only that, but she is really “real”—not just a liar, this time, but a practicing prostitute junkie. Significantly, The Pyx was not made in the United States. Hollywood, for the most part, has given up on movies about male/female relationships.

Phantom Lady is really a murder mystery, but the identity of the murderer is made known at an early stage, and the search for the missing woman provides the main thread of the story. An interesting plot point to note is the occupation of the murderer. Colin McArthur has pointed out that Hollywood’s anti-intellectualism manifested itself many times by having the villain committed to art; usually as a collector or a critic (e.g., The Maltese Falcon; The Big Sleep; Laura; and The Dark Corner). The real strength of Phantom Lady is in its visual quality and film noir moodiness. Most critics agree that the script is not as strong as it could be. “Hollywood in the Forties” points out that “The story—from a pulp novelette about a search for an accused murderer’s alibis, most notably a mysterious woman in a bizarre hat met in a bar to the strains of ‘I Remember April’—becomes an excuse for the exploration of the underworld, for a series of descending spirals into hell.” Taking place almost entirely at night, the glistening, wet streets place this film visually in the film noir genre and, at the same time, with its play of light and shadow, it invokes the   German expressionistic period. Durgnat views the heavy shafts of light in the condemned cell scenes as perhaps the last burst of expressionism in Hollywood. Andrew Sarris has pointed out that the films made by Robert Siodmak in Hollywood were more Germanic than his German ones. Siodmak, whose career began in Germany and France, made his first film in the U.S. in 1941. Phantom Lady, made in 1944, was his eighth Hollywood film. It was produced by Joan Harrison, a British writer-producer who was an assistant for many years to Alfred Hitchcock. A great deal of attention was paid to this producership when the film was first reviewed. James Agee’s review attributed everything to Harrison—Siodmak was not even mentioned. Pauline Kael noted that “Siodmak’s Hollywood films, such as The Spiral Staircase, The Suspect, Phantom Lady, The Killers, and The Crimson Pirate, are much better known than he is—perhaps because his films are often mistakenly attributed to other directors or to highly publicized producers.”

Phantom Lady is peopled with familiar Hollywood faces in secondary roles. Most notable is Elisha Cook Jr., the perpetual fall guy, who rarely survives on screen for more than one reel. There is one extraordinary scene he is in—a jazz jam session—that Agee describes as “a metaphor for orgasm and death—which in turn become metaphors for the jam session”. Agee points out that “the late reels of the picture slacken, and the ending, upon which Universal insisted, is half-heartedly done. But this is written as a would-be corrective of too much indiscriminate praise. There is plenty in Phantom Lady to enjoy, and to be glad of”.