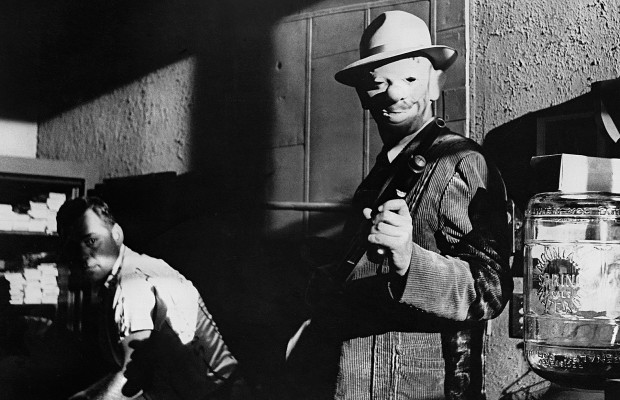 Stanley Kubrick made his first film at the age of twenty-one.  A short documentary about a boxer, entitled Day of the Fight (1951), it was sixteen minutes long and cast $3,900–one tenth the length and about one four-hundredth the cost of 2001: A Space Odyssey.  RKO bought it for a little more than it cost to make, and Kubrick, then working as a photo-journalist for ‘Look’ magazine, quit his job to become a movie director.  Before the advent of the film school, that was how a film director got his start, and for Stanley Kubrick, who had done badly in high school and never attended college, learning how to make a movie was an on-the-job sort of thing.  The Killing is an engaging gangster picture which starts out rather slowly with scene-setting, but unwinds into a positively entertaining melodrama of big plans and frustrated expectations.  In later films Kubrick takes on subjects like the destruction of the world, and the evolution of man from ape to got–here he is merely concerned with presenting a well-made entertainment, and on those terms the film is certainly a success.  Coming when it does, The Killing is remarkable for its nastiness.  One senses in watching this film that Kubrick is working mostly by instinct–that the black touches, which become intellectualized into a sort of dogma in Dr. Strangelove and A Clockwork Orange, are still at a gut-level stage in The Killing.  Thus, although it sounds like a contradiction in terms, there is an innocence about the perversity in The Killing.  It is a much less polished and entertaining film than Dr. Strangelove, but one feels that although he does not care much for the people he is watching, they are, after all, real people.  We certainly do not respond to the later bomb comedy this way.  The lack of intellection in The Killing provides it with much of its life, and given Kubrick’s later tendency to overintellectualize, one wishes that a bit of this innocence had been retained.

At any rate, Kubrick’s voice in The Killing is the voice which we have come to identify with his later films.  There is none of the liberal idealism of Paths of Glory or Spartacus here, but rather the cynical humor of Dr. Strangelove and A Clockwork Orange.

The Films of Stanley Kubrick by Daniel Devries, W.B. Eerdmans, 1973