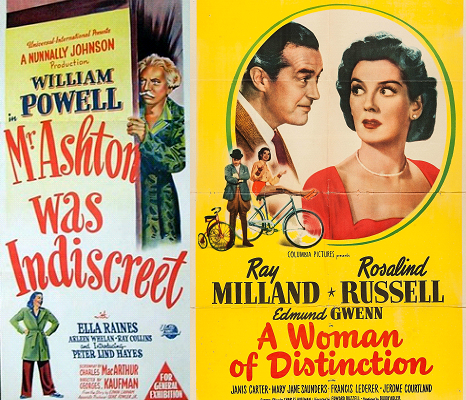 Toronto Film Society presented The Senator Was Indiscreet (1947) on Sunday, November 2, 1986 in a double bill with A Woman of Distinction (1950) as part of the Season 39 Sunday Afternoon Film Buffs Series “A”, Programme 7.

The two films on today’s programme deal with scandal and (real or imagined) indiscretion, films which at the time would have been called a “man’s” and a “woman’s” picture, having to do with those cherished themes of Politics and Sex (or vice versa).  Both films lean heavily on slapstick and broad satire in order to present a humourous view of two preoccupations of the time (or indeed of any time)–political corruption and woman’s independence.  The Senator Was Indiscreet tells the story of a bumbling, dimwit senator with presidential aspirations, while A Woman of Distinction features an intelligent woman who finds that her success as dean of a woman’s college is unfulfilling.  The indiscretions of the two main characters are resolved through a series of zany, madcap adventures designed to pull out all the comic stops on the way to the appropriate hilarious conclusions.

The Senator Was Indiscreet was the directorial debut (and finale) of the famous Broadway director, George S. Kaufman, who was wooed back to Hollywood to work in tandem with his former stage collaborator, Nunnally Johnson, and Gene Fowler, Jr.  Kaufman, whose reputation as a Hollywood lover was sealed in 1936 when the famous Mary Astor divorce scandal broke, splashing headlines across the country which quoted the lady’s diary, naming Kaufman to the very top of her Lovers’ List, was not only leery of the atmosphere in Lotusland, but felt entirely unsuited to the mechanical aspects of the filming process.  The acknowledged master of the quick quip (his one-liners are legendary, among which: “Forgotten but not gone” and “I understand your newplay is full of single-entendre”) had previously been involved in films as a writer, working with Morris Ryskind on the Marx Brothers films Coconuts and Night At The Opera.  But as a director he was content to leave the technical side of filming to Gene Fowler and concern himself with the characters in the film.  When the film was released in 1947, it promptly incurred the wrath of the already rampant Joe McCarthy, who labelled it “traitorous” and “un-American”.  Kaufman’s reaction to the witch-hunting smear tactics of McCarthy was to leave Hollywood forever, letting it be known that he was more disgusted with the Hollywood executives who gave in to these contemptible methods.  However, it was generally agreed that, as a film director, Kaufman (to use the words of Pauline Kael) “didn’t show much talent for the medium”.

In 1947, William Powell was to reach the apex of his popularity with three films, Song of the Thin Man (the last of the series), Life With Father and The Senator Was Indiscreet.  The three characters were completely dissimilar, and revealed the range of Powell’s talents in portraying the suave, sophisticated Nick Charles (the Thin Man hero), the stern, thundering Clarence Day (for which Howard Barnes lauded Powell’s “greatest performance of a highly distinguished career” in Life With Father), and the lame-duck Senator Ashton of The Senator… (a character which reminds modern audiences of the comic figure of James Hacker in television’s Yes, Prime Minister).  It was the last two of these films which won Powell the New York Film Critics Award for Best Actor of 1947, which he won over John Garfield (Body and Soul), Gregory Peck (Gentlemen’s Agreement) and Robert Ryan (Crossfire).

Powell’s engaging portrayal is ably supported by good performances among the other players, including Ella Raines, Charles D. Brown, Peter Lind Hayes (in his screen debut) and Ray Collins (as the bullying political boss).  The film is fast-paced and generally successful with the broad satire providing nice touches, such as the hokum Indian induction scene and the Hans Conried Communistic waiter character, as well as an unbilled appearance by Myrna Loy in the Queen of the South Seas scene (an obvious takeoff of the Crosby-Hope tongue-in-cheek fadeouts).

While the political lampoon lends itself extremely well to broad farce, the “collegiate” setting of A Woman of Distinction seems less successful as a forum for the same slapstick approach.  The comical indiscretions of ambitious politicians appear more acceptably amusing than the sight of a college dean being sprayed with water, smeared with mud, and generally “behaving like Mabel Normand in a Keystone comedy” (New York Times).  Even so, Rosalind Russell made her entire career out of just this type of role–the zany, fast-talking adventuress who’ll cavort her way through any gag–and she manages to carry off the “career-woman-lacking romance” cliché role yet again in this film.

Frank Capra, who, along with Paramount, had originally owned A Woman of Distinction, intended to star Jean Arthur and Cary Grant in the film, but when Arthur declined, the rights were sold to Columbia and Harry Cohn hired Russell and Ray Milland.  As a Capra screwball comedy, the vehicle might have fared better, but nonetheless the film is sufficiently energetic to provoke laughter with what Variety called its “escapology”.

Director Edward Buzzell (who had directed William Powell in the last Thin Man film, Song of The Thin Man, in 1947) sets a fast pace and keeps the film moving from slapstick situation to farcical innuendo, which generally covers up the inadequate plot line, and the scandal involving the paternity of the dean’s adopted child is amusingly, if unconvincingly, worked into the basic woman-needs-man premise.

After her terrific success in the 1939 Clare Booth Luce film The Women, where she proved her talents as a comedienne, Rosalind Russell moved into the second stage of her career during the 1940s to play the attractive, efficient female success in a male-dominated world who eventually succumbs to the charms of the male hero.  Her roles included the irrepressible Hildy Johnson of His Girl Friday (a part which Howard Hawks had tailor-made for her in 1940), an insurance executive (This Thing Called Love, 1941), a judge (Design For Scandal, 1941), the head of an advertising agency (Take A Letter, Darling, 1942), a famous aviatrix (Flight For Freedom, 1943), a top literary agent (What A Woman, 1943), a psychiatrist (She Wouldn’t Say Yes, 1945) and an attorney (Tell It To The Judge, 1949).  Hollywood was never loath to flog a winning formula!!

Despite the repetitiveness of her parts, Russell made the well-dressed, quip-slinging woman of substance character entirely her own, helped by her abundant energy and excellent comic timing.  For feminists who might seek a role-model in Rosalind Russell’s films, A Woman of Distinction provides a disappointment, but it was Hollywood in the 1940s which sought to legitimize the idea of woman’s success int he male world by ultimately having the heroine fall for the hero and give up her career.  It is, perhaps, Russell’s sense of humour and exuberance which serves as an object lesson to today’s woman–“The secret of successful acting is identical with a woman’s beauty secret: joy in living” (Films in Review, 1970).

Ray Milland was another Hollywood actor who was often typecast as the seemingly dignified professional character in several films.  In 1949, It Happens Every Spring saw him as a chemistry professor who accidentally discovers a chemical mixture which causes baseballs to avoid wooden surfaces; and in Night Into Morning (1951), directed by Canadian Fletcher Markle and co-starring Nancy Davis (Reagan), Milland reveals the sinister, darker side of his screen personality as a small-town professor who loses his family in a fire and nearly destroys himself in drink and self-pity.  in A Woman of Distinction, Milland is again typecast as the visiting British astronomer, providing a clever foil to the antics of the dean.  Milland matches Russell’s wit in the traditional battle of the sexes, with the outcome a foregone conclusion. 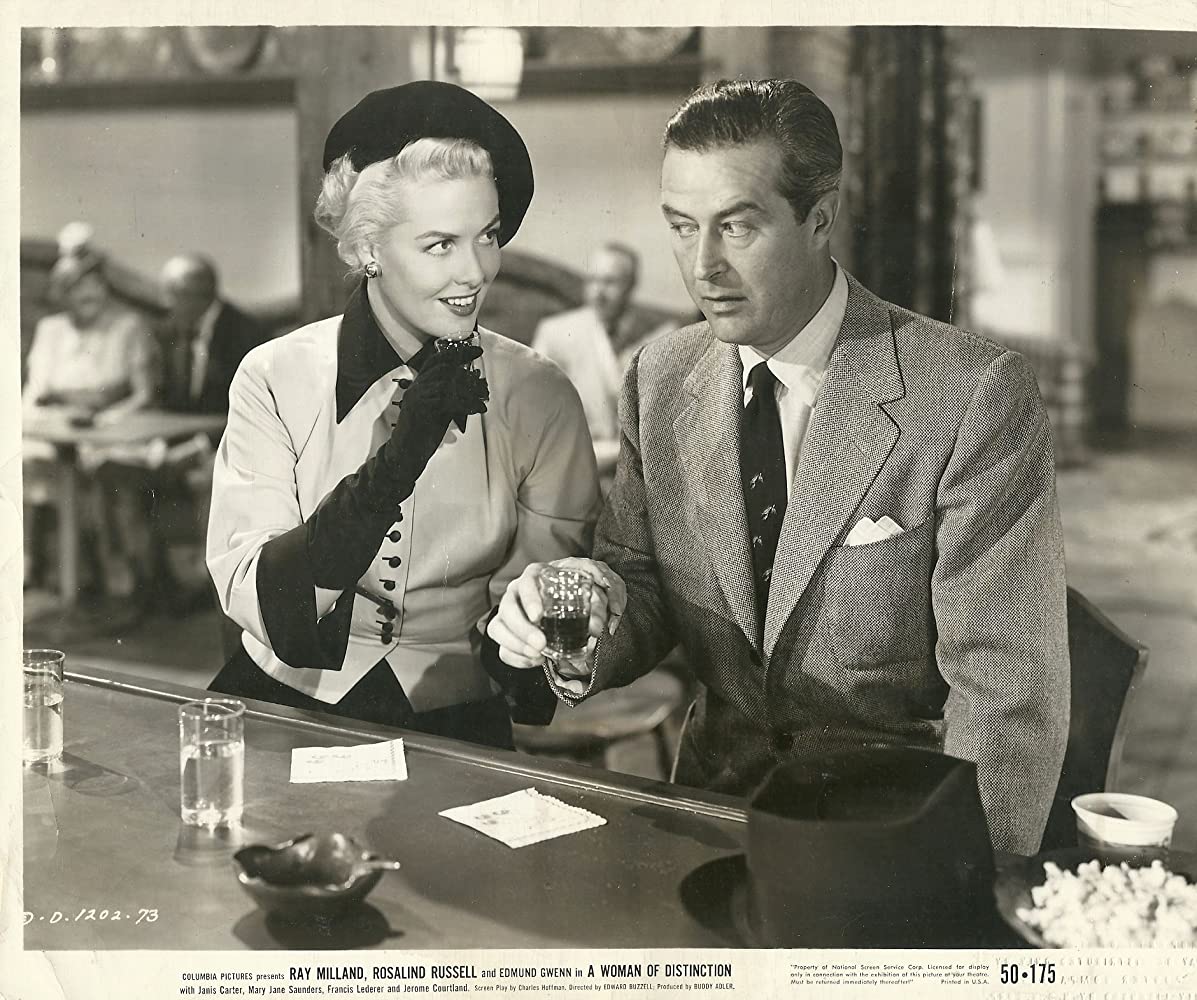 Edmund Gwenn was also at the height of his popularity in 1950, after his Oscar-winning performance in 1947’s Miracle on 34th Street, and was about to earn another nomination for his elderly counterfeiter in Mister 880 of the same year..  As the comparison with Charles Winninger in the 1945 Russell film She Wouldn’t Say Yes, who engineers a relationship for his daughter (Russell as psychiatrist), telling her “You’re not a woman, you’re a ghoul” (!), or even to Charles Boyer as Leslie Caron’s father in the 1965 clinker A Very Special Favour.

Overall, A Woman ofDistinction sparkles briefly with wit and routine performances bya ll, but one can be forgiven for agreeing with the critic for the Monthly Film Bulletin, who saw the battle of the sexes characterization as “coarsening with repetition”.

The relative importance of these two films perhaps lies in the light, humourous approach to the scandals which, today, would probably be treated in a more extreme way (if at all)–either in serious, psychoanalytical terms or in an even more foolishly adolescent manner.