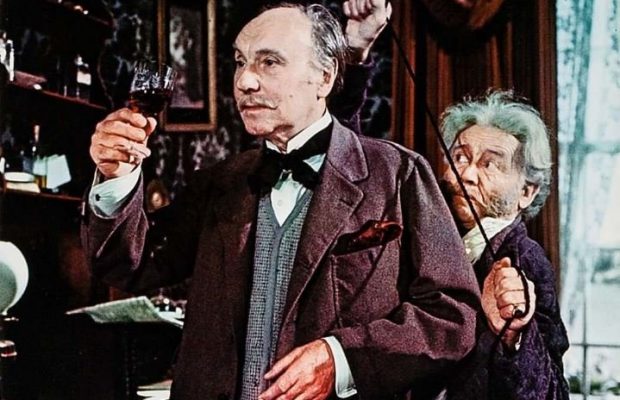 Toronto Film Society presented The Wrong Box  (1966) on Sunday, January 8, 1989 in a double bill with The Green Man as part of the Season 41 Sunday Afternoon Film Buffs Series “B”, Programme 4. 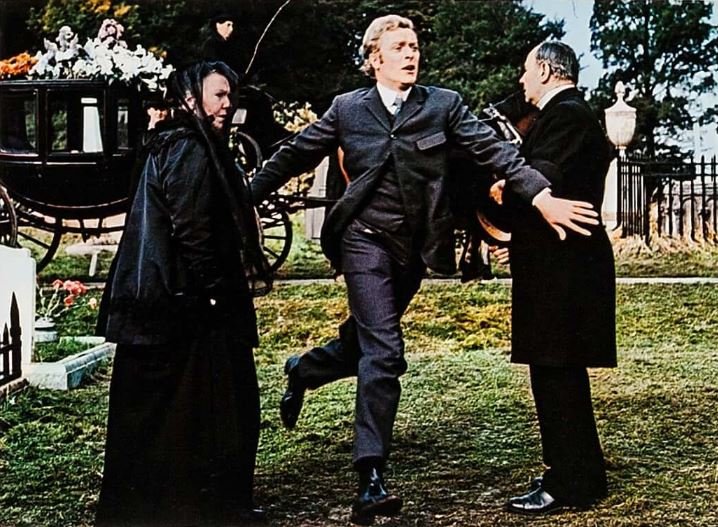 The Wrong Box contains several villains expertly played by some of Great Britain’s best actors.  The story begins around the end of the 19th century when Masterman and Joseph Finsbury (John Mills and Ralph Richardson), two elderly brothers who haven’t seen each other for many years, become the last surviving members of a Tontine worth 100,000 pounds.  The “villainous” but bed-ridden Masterman (Mills) is determined that the money shall go to his grandson (Michael Caine), a medical student, and to this end makes several ineffectual attempts on his brother Joseph’s life; Joseph, on the other hand, is much too busy with his mania for collecting useless information to bother about it, but has two avaricious (and villainous) nephews, Morris and John (Peter Cook and Dudley Moore), who are equally determined that the money shall come to them.  The resulting chaos was well summed up by Bosely Crowther in the New York Times review of July 20, 1966:

“Robert Louis Stevenson and Lloyd Osbourne must be whirling in their graves, convulsed with astonishment and laughter at what a bunch of British actors have done in turning their humorous tale, The Wrong Box, into an outlandish film.

For what these respectable actors, working under the direction of Bryan Forbes, have done is to lift this Victorian fable of a family’s fight over a legacy into a farce so fantastic and explosive that it virtually pops right out of the screen.  They do it up brown in glorious color, and it opened yesterday at Cinema I.  Who are these obstreperous actors? Well, in the first place, there’s John Mills as the elder of the Finsbury brothers, who is determined to outlive the last of his family rivals for the fabulous Tontin legacy, and thus pass on the fortune to his grandson, played by Michael Caine.  Then there’s Ralph Richardson playing the younger Finsbury, in a style of airy erudition and pomposity that reminds one of W. C. Fields.  There are Peter Cook and Dudley Moore as his nephews who are determined to get the legacy for themselves. And there’s Nanette Newman as his beauteous foster daughter, oblivious to everything except Mr. Caine.

There’s Wilfrid Lawson, grizzled and wrinkled, playing a butler so feeble and worn it takes him a couple of minutes just to wobble across the hall to the door.  There’s Peter Sellers as a cracked physician who lives in an attic surrounded by cats.  And that’s not counting Tony Hancock, Cicely Courtneidge and Irene Handl in cameo bits.

Yes, it’s a splendid assortment of British thespians Mr. Forbes has in this film, and he puts them through farcical paces that would tax the vitality of the Keystone Cops.  Murderous attacks on Mr. Richardson by a fierce and unkillable Mr. Mills, train wrecks and juggled corpses and a runaway funeral cortege—these are a few of the incidents that pop in this crazy, merry tale that tumbles somewhere between black humor and elegant, unhibited camp, spotted with lurid subtitles in the manner of an early silent film.

Perhaps the best of the clowning is the little bit Mr. Sellers does as this drink-sodden, absent-minded skip-jack, fumbling foolishly and a little sadly among his cats.  But Mr. Richardson is splendid as a scholarly charlatan, and Mr. Mills and Mr. Lawson are capital as a couple of fuddy-duddy crooks.

Sure, the whole nutty business is tumbled together haphazardly in the script that has been written—or maybe scrambled—by Larry Gelbert and Burt Shevelove.  Some sections and bits are funnier than others.  Some are labored and dull.  It is that sort of story, that sort of comedy.  But it adds up to a lively lark.  And, incidentally, the English scenery in splendid color is mighty nice.  [One can only hope that today’s print won’t put the lie to this.  I recall that the colour was absolutely gorgeous when I first saw the picture. – B.C.]

Mr. Stevenson and Mr. Osbourne can rest contented that their story has been expertly vandalized.”

In recalling the film, Michael Caine said he welcomed the change of role coming as it did just after Alfie.  “It was an antidote to Alfie.  I wanted to play a shy man with glasses.  It was a scene stealer film–every time you walked on there was Wilfrid Lawson or Tony Hancock or Cicely Courtneidge or Ralph Richardson doing their number, and you didn’t stand a chance.  That picture was so English it went well everywhere except in Britain.”

His favourite scene in the film is where six hefty pallbearers have to carry a tiny coffin containing the remains of a pet dog to the burial ground, to be greeted by a shriek from siren-voiced Irene Handl, one of the shocked mourners: “What ‘ave they done to ‘im?  He was six foot tall–and now look at ‘im!”