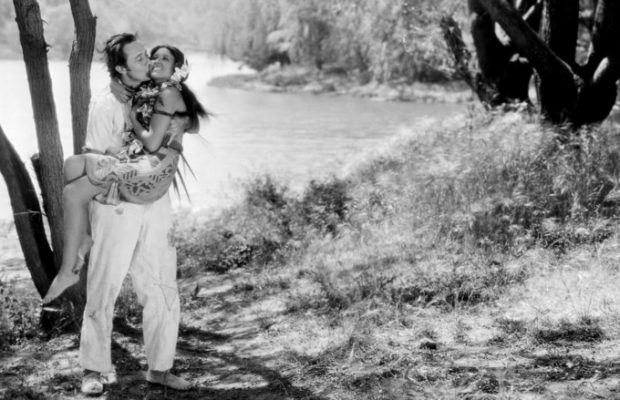 The programme will open with Charlie Chaplin’s The Immigrant; there will be a 10-minute intermission followed by the feature film.

Late in 1927 Irving Thalberg, production chief at MGM, decided to make a film of O’Brien’s book which would combine documentary backgrounds with a fictional story.  He offered the director’s job to Robert Flaherty whose work with the Polynesian natives on Moana qualified him as an expert on South Seas film-making.  Flaherty accepted the assignment on this studio-backed story film only because of his inability to find work elsewhere.  One mitigating factor was Flaherty’s friendship for O’Brian, in whose work he had long expressed filmic interest.  Leery of sending an individualistic director like Flaherty (whose Moana had not been a spectacular boxoffice success) alone on location, Thalberg sent W.S. Van Dyke (an “expert on outdoor films” who had previously made serials and Westerns) along as associate director.  After a short period of preliminary work, Flaherty found that working under the studio system with an unsympathetic crew who would rather loaf than work, was impossible, and he resigned.  Van Dyke, doing “second unit” work at the time, was placed in charge of the production; the completed film is his work, aside from some dozen shots by Flaherty.  For its original release, this silent film was given a sound track with music, native chants and other effects. After the premiere in Hollywood, D.W. Griffith introduced Van Dyke (who had assisted him in Intolerance 12 years earlier) to the audience by stating: “White Shadows in the South Seas is a work of art, and Woody Van Dyke is the artist who brought it into being”.  Though the film was “less pure than Moana” (Bardeche and Brasillach) it had many of the virtues of Flaherty’s film–fine acting by natives and breathtaking natural photography, and was generally acclaimed as an artistic as well as popular success.

Paul Rotha said in The Film Till Now: “Prominent among the beliefs of Hollywood is the conception that the general public is more interested in people than things.  Seldom is a landscape or a piece of architecture used in an American film for its own beautiful sake.  (This is bad? – G.G.P.)  Only as a background to people does the American producer allow nature to interfere.  Typical is the film White Shadows in which even the hard hand of Hollywood, personified in the haggard Monte Blue and sex-charged Raquel Torres, could not subdue the waving palms and mountainous, cumulus clouds of the South Seas, which Van Dyke’s cameramen succeeded in photographing so well.  White Shadows, good as it was in places, cannot be compared with the quality of Moana.  If Flaherty had made it, there is little doubt he would have surpassed Moana.  If it were possible to consider White Shadows apart from the nonsense of the acting interest, a badly faked model of a shipwreck and a moral of white men ruining the sanctity of the island, there remained some very beautiful landscape scenes.  Despite its cheapness of story, it will remain memorable for its liquid sunlight, its white clouded skies, its far-reaching stretches of white sand and beach.  It ranks with The General Line and Moana as being a perfect example of the decorative values of panchromatic photography.

Today, Mr. Rotha’s strictures on the story are a little hard to understand, for not only do the pictorial values remain unimpaired, but the theme, content and outlook of the film seem well above the ordinary Hollywood output.

“It is strange that Flaherty should have been so generally disinterested in the production, as it is far from a ‘Hollywood’ film.  If it is romanticized, it is romanticized in the tradition of Tabu rather than of Aloma of the South Seas.  The only notable Hollywood touch(other than some technical trickery in a storm sequence) is the inevitable episode of the hero accidentally coming across some island damsels disporting themselves in a pool.  The ‘thrill’ of the scene in which a diver is menaced by both octopus and shark, may be a trifle contrived–but no more so than the shark-hunting in Man of Aran or the tussle with the alligator in Louisiana Story.  Rotha’s grudging praise of the film as it emerged, and his suggestion that if left alone, Flaherty could have made a masterpiece of it, is typical of the intellectual snobbery directed at the Hollywood film.  More to the point would have been to have pondered the question of how much better Man of Aran might have been if Van Dyke had directed it!

Incidentally, Van Dyke’s use of gauze before the cameras not only produces some strikingly beautiful shots, but in the climax particularly, is probably more genuinely creative than this device has been before or since.”

Traditionally, two of the most valuable early training schools for film directors have been the slapstick comedy and the Western.  In the latter field the names of John Ford, William Wyler and Henry Hathaway come most readily to mind–and one may add W.S. VAn Dyke, who spent some years putting such as Buck Jones and Tim McCoy through their paces before developing into one of the more skilled and versatile “boxoffice” directors of Hollywood–with occasional solid critical successes to his credit.  White Shadows in the South Seas, his first notable film, was later followed by such other location-shot “native” epics as Eskimo, The Pagan and Trader Horn; but in Van Dyke’s years at MGM he turned his hand to almost everything–political melodrama (Night Court), juvenile delinquent themes (The Devil is a Sissy), period spectacles (Marie Antoinette and San Francisco), the early and best Weismuller Tarzan movies, the witty and popular Thin Man series, some of the MacDonald-Eddy musicals, a psychological war drama (They Gave Him a Gun), one or two Andy Hardy pictures and Journey for Margaret with Margaret O’Brien–her first film, Van Dyke’s last before his death.

Predominantly a reliable maker of entertainment films, Van Dyke had a shrewdly competent picture-making sense and, when given a script with interesting content, could turn out a picture that was not only entertaining but worth-while.