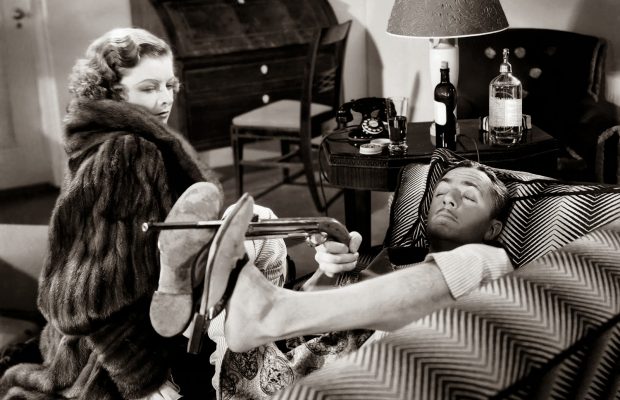 Toronto Film Society presented The Thin Man (1934) on Monday, December 19, 1983 in a double bill with Adam’s Rib as part of the Season 36 Monday Evening  Film Buffs Series “B”, Programme 4.

Perhaps no other film series caught the mood of American ideology in the 1930’s and 40’s as did The Thin Man, produced by MGM between 1934 and 1946.  The six films, which were Grade “A” productions all the way, starred William Powell and Myrna Loy in what was felt by most to be the screens most perfectly matched couple.  The series blended domestic comedy with fast-paced detective drama.  Powell, usually slightly under the weather because of a cocktail (or two) too many was Nick Charles, who practiced inductive sleuthing as a finely honed art, and Myrna Loy was Nora; smart enough for her husband, and with an insultingly polite way about her either in the drawing room or in the midst of helping (or hindering) her husband to solve a case.  This was one of the few ongoing series which was carefully turned out–at a leisurely pace–and was always top billed in theatres.

The initial film, which we are seeing tonight, was turned out in just 14 days and earned over two million dollars.  The veteran W.S. Van Dyke directed the first five films, giving them the highly-professional touch so evident.

Few people realize the actual Thin Man appeared only in the initial film, tonight’s offering, and that it was played by Edward Ellis in a supporting role.

The Thin Man centres on the story of a noted inventor who is divorced because of an affair with his secretary.  His ex-wife has remarried.  The inventor learns that his girlfriend has stolen $50,000 and is as well (horrors!) carrying on with several other men.  She is found dead and the mystery is on its way.

Watch for one episode in the film which rocked 1930’s audiences in their seats–as Nick delivers a K.O. punch to Nora–for her own good, of course.

The New York Times noted: “William Powell is by now a past master in the art of sleuthing.  His performance is even better than his portrayal of Philo Vance.  He has good lines and makes the most of them.”

Powell was, by the mid-30’s, a screen veteran.  He had made his debut in 1922, in yet another sleuthing vehicle, John Barrymores’ version of Sherlock Holmes.  He was also in the cast of Beau Geste in 1926, as well as the Last Command in 1928.

Powell entered the “talkies” in the 1929 production of Interference the same year he played Vance in The Canary Murder Case.  The Thin Man was Powell’s second film for MGM after he moved over from Warner Brothers.  He received an Oscar nomination for the role.  For his portrayal in the title role of My Man Godfrey (1936) and as Clarence Day in Life With Father (1947), he received other nominations.

Myrna Loy (nee Williams) was the daughter of a Montana rancher.  She joined the chorus at Grauman’s Chinese Theatre, then entered the movies in 1925 in Pretty Daddies.  Then followed a five year stint at Warners, playing a string of oriental villainesses and vamps.

She eventually moved into a string of romantic tales, one of the best of which was Test Pilot, with Clark Gable in 1938, but she returned when the call for more Thin Man films went out.

And, no look at a Thin Man film can be completed without reference to the non-human member of the cast who became a star in his own right as the series went on–Asta the Dog.  If there had been a Canine Oscar, Asta would have been right along side Lassie and Rin Tin Tin for the honour.