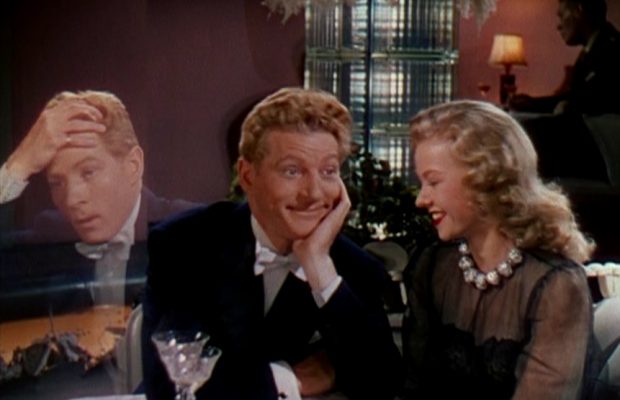 Wonder Man is a madcap, musical comedy brandishing the patina of a 1940s Hollywood extravaganza of lush decor and lavish backgrounds–a spectacular style borne most gracefully be a retinue of Goldwyn Girls.  The entire picture is a visual kaleidoscope of fantasy film lore, a backstage story of a brash nightclub entertainer and a gangster drama that demonstrates both “a technical and personal beauty” (A. Slider – Selected Film Criticism, 1983), achieved by the director, “Lucky” Bruce Humberstone.  Directing Danny Kaye in his second starring role–perhaps the best film of each man’s career–Bruce Humberstone elicits a commendable performance from the star in the straight acting sequences that, in its sobriety, matches the hilarity and hysteria of the musical numbers designed by the illustrious Danny Kaye.

Wonder Man is based on the absurd notion that Danny Kaye should have an identical twin brother “with the same wavy hair, the same sharp gestures, and the same lanky shape” (New York Times Review, 1945) but in the form of a mild-mannered bespectacled bookworm whose actions are prompted by the frolicsome ghost of the flamboyant nightclub entertainer.  Witness to a gangland murder, the first twin must be and is eliminated by the underworld mobsters whose spirit then enters the body of the living twin to avenge his own murder!  Imbibing not only the talents of the first twin but also an insatiable zest for living, the second twin erratically aspires to live up to a zany reputation with several women and dangerous criminals that culminates in a wild operatic number, “Otchi Toherniyo”.  Chattering confusedly while impersonating a Russian baritone with hay fever, the second twin amusingly conveys to the Distric Attorney in the audience, the information necessary for the arrest of the killers. 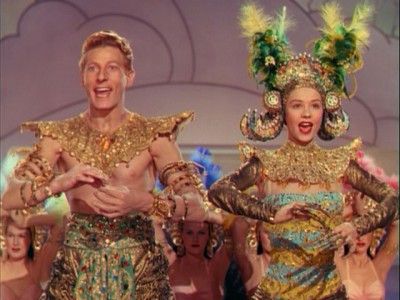 Virginia Mayo is the bookworm’s bewildered girlfriend and is the leading lady in four of Danny Kaye’s earlier and most popular films: Up in Arms (1944); Wonder Man (1945); The Kid from Brooklyn (1946); The Secret Life of Walter Mitty (1947).  Wonder Man also marks the film debut of Vera-Ellen as an actress and singer-dancer who plays the fiance of the soon to be murdered twin brother.  S.Z. Sakall has a memorable performance as the delicatessen proprietor most confused by the strange behaviour of the living twin when he orders a pint of Prospect Park instead of potato salad.

Presented with the opportunity of a rare spoof of coincidence, Danny Kaye gleefully exhibits a wide range of talents and comic inventiveness that precisely captures the dual roles he is required to perform.  Upon the release of Wonder Man in 1945, Danny Kaye attained to a screen popularity in the 1940s that had nomadic beginnings in the star’s early youth.  Born David Daniel Kaminski, son of a garment tailor, on January 18, 1913 in Brooklyn, New York, Danny Kaye started a vaudeville career at age 13 as a clowning busboy on the Borscht Circuit in New York Catskill Mountains.  Throughout the 1930’s, Danny Kaye supplemented a singer, dancer-entertainer lifestyle by working on the production of two reel films for educational pictures until his Broadway debut in “Straw Hat Revue” (1939) with Imogene Coca.  An initial success was soon followed by the Broadway production of “Lady in the Dark” (1941) that displayed Danny Kaye’s special genius for scat singing and inventive wordplay that has since become the trademark of Danny Kaye’s appearances.  By 1943, Danny Kaye had obtained a starring role in Samuel Goldwyn’s Up in Arms (1944), first in a series of highly successful Goldwyn musical comedies tailor-made to exhibit the versatile talents of the star for pantomime, impersonations and a singular vocal agility.  Experiencing record breaking engagements at the London Palladium in 1948 and 1949 while embarking on a world wide travel programme to entertain children in developing countries, Danny Kaye was awarded a special Oscar in 1954 “for his unique talent, his service to the Academy, to the motion picture industry and the American people” (World Encyclopedia of Film, Ephraim Katz).  In more recent years, Danny Kaye has produced an Emmy award-winning television variety programme (1963-1967) and is presently co-owner of the Seattle Mariners baseball club.