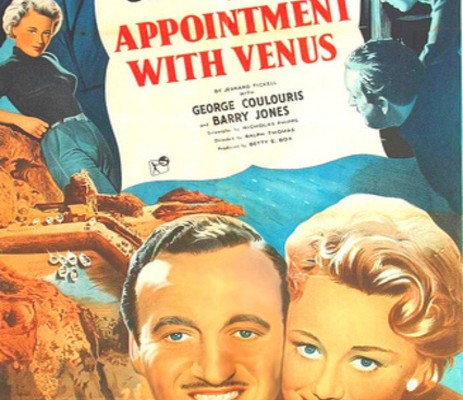 Toronto Film Society presented Appointment with Venus on Sunday, November 10, 2013 in a double bill with Carlton-Browne of the F.O., as part of the Season 66 Sunday Afternoon Film Buff Series, Programme 2.

It’s WWII and you have been given the assignment of sneaking behind enemy lines in order to save a damsel in distress.  “Venus” needs to be rescued from the cruel hands of the Nazi invaders.  Hilarity ensues when the War Office plans a mission to save “Venus”, the Ministry of Agriculture’s prize…COW?  The Ministry is in a tizzy, as not only is Venus a “triumph of breeding”, she is also pregnant by Mars, a champion bull of equal pedigree.  The thought of Venus falling into enemy hands is enough to cause any farmer to “have a cow”.  Appointment with Venus, later renamed Island Rescue for the American marketplace, is based on the real-life incident of the evacuation of the Aldernay cattle from the Channel Island during World War II.

Dry and sardonic, DAVID NIVEN (1910-1983) had a long career spanning over 50 years, and a penchant for playing affable and charming characters.  Niven was named for the Saint’s day that he was born on, St. David, patron Saint of Wales.  He started his career in 1932 with uncredited bit roles, and gradually worked his way up from there.

When war broke out, despite being a top-line star, Niven was one of the few actors to re-join the army.  During his time in uniform, he did play two roles, both with strong propaganda value: The First of the Few (1942) and The Way Ahead (1944).  In spite of his long absence from the silver screen, Niven still came in second in a 1945 British popularity poll of film stars.  Upon his return to Hollywood, Lt. Col. David Niven was made a Legionnaire of the Order of Merit by none other Gen. Dwight D. Eisenhower.

Niven returned to his career in 1946, but now taking only starring roles.   In 1950, he starred in a British film entitled The Elusive Pimpernel, which was

supposed to be distributed in the United States by Samuel Goldwyn.  Goldwyn pulled out of the deal, though, and the movie did not appear for another three years.   The relationship between Niven and Samuel Goldwyn (the producer who gave him his start) became  strained with Niven’s demands for more money, which led to a long estrangement in Hollywood, and he was largely banned from most of the big studios in the 1950s.  He was still able to make eleven films during this period; two MGM productions and the rest low-budget British productions.  That being said, Niven was still able to garner a Golden Globe award for his work in The Moon Is Blue (1953).    Near the end of the decade, he was able to win his first and only Academy Award for Best Actor, for his role as Major Pollock in Separate Tables (1958).   Appearing on-screen in the film for only 16 minutes, this remains the briefest performance ever to win a Best Actor Oscar.  With an Academy Award to his credit, Niven’s career continued to thrive, and he subsequently appeared in another thirty films during his career. The more memorable ones included The Guns Of Navarone (1961), The Pink Panther (1963), Murder by Death (1976), Death on the Nile (1978), and The Sea Wolves (1980).

Actress GLYNIS JOHNS (1923-), who plays Nicola Fallaize, is best known for her role as the suffragette mother of the children in the well-loved classic Mary Poppins (1964).  Johns, born in South Africa, is the daughter of Mervyn Johns.   Her mother, a concert pianist, was on tour when she was born, but Johns was always more proud of her Welsh roots.  Known for taking roles with a light comedic touch and/or playful flirtation, Johns took great delight playing opposite Richard Burton in Under Milk Wood (1972).  She continued to work quite prolifically well into the late ‘90s, playing diverse roles in both in film and on television.