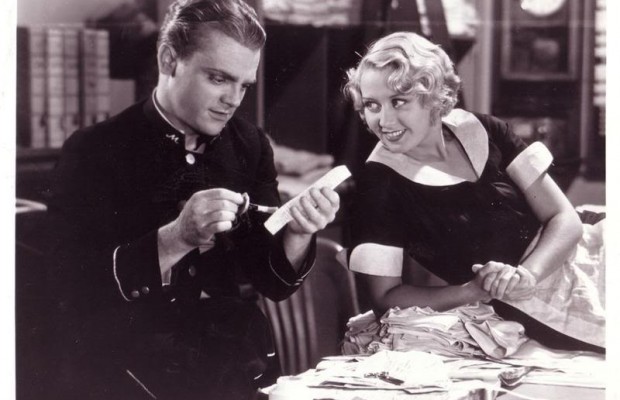 Blonde Crazy marked a real breakthrough for James Cagney. The Glasmon and Bright story gave Cagney a chance to play comedy and the top billing he received was not to be relinquished until the mid-fifties. The role of a crooked bellhop demonstrated Cagney’s sweet and comic side, and his ability to give comedy the same force and energy he gave melodrama. Critics took notice of his versatility.

At this point, Cagney went to stay in New York, waiting for a raise. The situation was unique in its time, comparable to recent instances of athletes holding out for salary boosts until halfway into the season. It just wasn’t done, and Warners executives were angered and unhappy. Cagney and Bette Davis, more than any two stars, balked at the studio system as early as the ’30s. Their reasons for intransigence was similar to the ones athletes give today; their employment represented a form of high-salaried slavery. They were cogs in the studio machinery, fitted into roles and pictures dictated from above.

Cagney stayed in New York for six months, reunited with his family and friends. The bravery and chutzpah of his holdout dazzles the mind; he was at the very start of his career, not really established, just a few steps from the oblivion he had so recently emerged from. Yet here he was daring Warners and the movie industry to throw him out. It was a role taken from his funniest and most hard-boiled films-the cocky Irishman challenging the stuff shirts. Meanwhile, Blonde Crazy was well received and Warners, sitting on a pile of scripts tailor-made for Cagney, got restive. The Academy Arbitration Board stepped in and worked out a settlement. Cagney was given a new contract, lifting his weekly pay check from $450 to $1,000. Cagney returned to Hollywood. His first holdout had ended. There would be others.

Sex was the first demon to be exorcised by the Code; violence was next. Warners had no intention of killing their profitable gangster films, but they did agree to add a disclaimer or moral tag to the end of each one, declaring that the evildoers were ultimately punished. Since Cagney was so closely associated with cold blooded violence, they decided to give him a change of pace. For his first starring role, Jimmy was cast in a comedy, again written by Bright and Glasmon. The original title, “Larceny Lane”, was later changed to Blonde Crazy.

Jimmy’s creative contributions had been well received during the filming of his previous pictures, so he didn’t hesitate to make suggestions and to put in occasional ad libs when he believed the script would be helped by them. The director of Blonde Crazy, Roy Del Ruth, was not accustomed to this much input from the actors, however, and told Jimmy to play the scenes exactly as they were written. “I stopped putting things in, and word came down the next day, after they saw the previous day’s shots. Zanuck asked me what was the matter, and I told him that Del Ruth wanted it that way.”

Zanuck spoke to the director, who subsequently told Jimmy to do it his way; but Del Ruth wasn’t happy about it. To illustrate his contempt, he ignored Jimmy and, for some unknown reason, put the script on the floor and turned the pages with his feet. When Jimmy was ready to rehearse a scene Del Ruth would not so much as look in his direction.

“I called Blondell over,” says Jimmy, “and had her sit there. I told her I would play the scene to her, for her approval. He was trying to put me in my place by ignoring me. I don’t blame him much. That’s a lot for an actor to do-to take on his own direction. So I did the lines as if Joan were the director. I asked her, ‘How was it, Joan?’ She said, ‘Fine,’ as if she were the director. He still ignored me.”

Cagney, The Authorized Biography by Doug Warren with James Cagney

After Smart Money came Blonde Crazy, in which I played a red-hot bellhop loaded for larceny, sharing it all as ever with Joan Blondell. This was the first time I had ever worked with Louis Calhern, a very suave gent and excellent light comedian, who made a very interesting observation to me at the time. He said, “You sawed-off fellas have to make it. When I went into the business, they needed tall leading men for those strong, forceful leading women-Ethel Barrymore, Margaret Anglin, and the like-all tall gals. I was six foot four, and that’s what producers wanted. Guys a few inches under six feet wouldn’t get the roles; you fellas have to make it.”

I suppose I must have been adequate in the small part I had been given in The Man Who Played God, because Warner Brothers borrowed me again four months later for a slightly better part in a film starring Jimmy Cagney and Joan Blondell. I think it was called Blonde Crazy or perhaps Larceny Lane. I don’t remember. One thing I do remember, though, was Cagney’s lousy piano playing. It was occasioned by a three-page scene we had together, all dialogue, which was supposed to take about three minutes to play. The way Cagney and I went through it, the scene was over in twenty-six seconds. You see, in those days Cagney spoke even faster than I did. With a look of utter disgust, the director, Roy Del Ruth, decided to call it a day.

“You two remind me of a couple of goddam woodpeckers,” he rumbled. “Now tonight, get together somewhere and go over it so that tomorrow we can understand it. Right now I’m catching one word in four. Good night!”

I think it was Cagney’s second leading role, and the studio had great hopes for him. Before driving home we arranged to meet at his apartment, which was on the second floor of a court much the same as mine, but at the bottom of Holloway Drive, about four blocks from my place. “Don’t bother to eat,” Cagney said. “I’ll have my wife fix us some hamburgers-she’s pretty good-and then we’ll get at it.”

The apartment was standard for the area, with a rather large living room, a dining area, one bedroom and a bath and a kitchen. There was an upright piano at one end of the living room, and the rest of the furniture was Barker Brothers Mexican. His wife, most attractive and calm, went into the kitchen to prepare the dinner, and Jimmy and I went to work on the scene. In half an hour we had slowed it down to what we thought was a very pedestrian pace, and then hamburgers were announced. Now I had always considered myself one of the fastest eaters in the world, but on this particular evening I came in a bad second. From the first bite to the last I don’t think Cagney took a breath. By the time I had finished he was seated at the beat-up piano looking through some music.

“Hey,” he said, “know anything about music?” And before I could reply he said that he was taking piano lessons by mail. “Listen to this.”

I think it was a piece called “Love for Sale,” but by the time he got through, it could have been anything by John Philip Sousa. That was Cagney. Several years later I asked him if he had ever finished his mail-order course of piano lessons. “Nah,” he replied, “the goddam neighbors got a court order and I had to send the piano back.”

Wide-Eyed in Babylon by Ray Milland