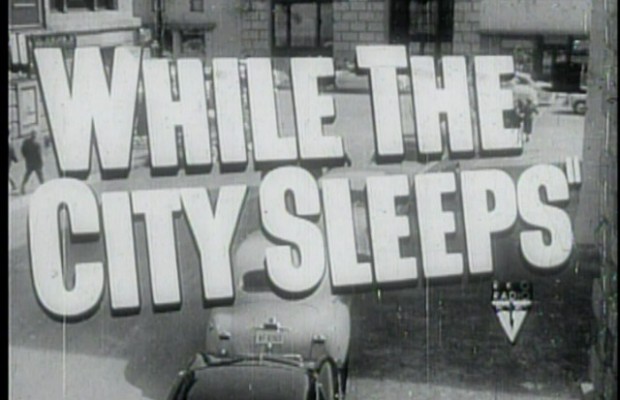 Toronto Film Society presented While the City Sleeps (1956) on Monday, August 18, 2014 in a double bill with Scandal Sheet as part of the Season 67 Summer Series, Programme 6.

A power struggle ensues after the death of media magnate Amos Kyne, whose sole heir, Walter, an immature playboy with no understanding of media, has no interest in running the corporation himself and prefers to create a competition between three senior members of staff for the position of executive editor. The post will go to whoever can secure the arrest of the “Lipstick Killer”, a serial killer who has been terrorising women. The three men set about their task in alliance with different associates in the world of media, while the television personality, Edward Mobley, also becomes involved and attempts to use secretary Nancy Liggett, his girl friend, as bait to force the killer to reveal his identity, putting her life and that of others in serious danger as a result. The film ends with a chase involving almost all the main characters through the tunnels of what is supposed to be the New York subway but is actually a similar setting in Los Angeles.

Bosley Crowther of the New York Times liked the film, especially the acting, and commented: “Since it is full of sound and fury, murder, sacred and profane love and a fair quota of intramural intrigue, a viewer is left wondering if the tycoons of the giant Kyne publishing combine ever bother to cover such mundane stories as the weather. But while this journalistic jamboree is more flamboyant than probable, a tight and sophisticated script by Casey Robinson and clutch of professional performances make While the City Sleeps a diverting and workmanlike fiction.”

Several critics, however, find the film downbeat, even cynical, with hardly any attractive characters, especially among the men, who are almost universally avaricious and self-interested. Even the film’s supposed hero, played by Dana Andrews, is wiling to use–and risk–his girl friend to advance his ambitions, and some scenes explicitly offer parallels between him and the murderer The youthful killer, in black leather jacket and motorcycle cap, seems to represent a jaundiced view of modern youth (this was the era of The Blackboard Jungle, Marlon Brando’s The Wild One and Rebel Without a Cause) but without the attempt of these films to understand or perhaps even sympathise with the killer (as Lang did in his masterpiece M many years previously).  “The heart of the story” [critic Dennis Schwartz suggests] “is seen through the glass-walled newspaper offices and all the underhand things that normally take place there are revealed, as Lang reserves his harshest judgment on the blindly ambitious newspaper people who could so easily throw away their self-respect for power, vanity, and money.”

Born Carver Dana Andrews on a farmstead in Mississippi, his family moved to Texas where he attended Sam Houston State University and then, hoping to find work as an actor he moved to California, where he studied theatre and acting at the Pasadena Playhouse, and became an acclaimed member of the company, attracting the attention of Samuel Goldwyn, who offered him a movie contract. His first film role was in The Westerner (1940) and this led to his finest period as an actor in the following decade with Ball of Fire (1941–as a gangster), The Oxbow Incident (1943–as a lynching victim), Laura (1944–as an obsessed detective), The Best Years of Our Life (1946–as an air force veteran) and State Fair (1945–as a singer in a musical in which he starred with Jeanne Craine). His career began to stall in 1950s as a result of his alcoholism, and, after Where the Sidewalk Ends in 1950 he moved more into B-movies, though he had success in Fritz Lang’s While the City Sleeps (1956) and Beyond a Reasonable Doubt (1957) and Jacques Tourneur’s Night of the Demon (1957). His later work was mostly in radio, after he had brought his alcoholism under control, and he died from heart failure in 1992 at the age of (83).

Born in London, England, and coming from a theatrical family that included the well-known stage and film comedian Lupino Lane, she trained at the Royal Academy of Dramatic Art and appeared in several British films between 1931 and 1933, after which    she moved to Hollywood. and made a dozen films for Columbia and then Warner’s, though her independent spirit resulted in her spending much of her time at the latter, studio suspended. and led to her leaving the studio in 1947. She then moved to Columbia, and concentrated on developing a career as a director, one of the very few women to do so at this period., having become interested while spending time on suspension and studying the filmmaking process. She formed an independent company with her husband Collier Young and became a producer, writer and director of low-budget, issue-directed films, six of which she directed or co-directed and three of which she acted in. She then went on to produce, direct and write her own films on controversial subjects related to women’s concerns, such as Outrage (1950) and the film noir The Hitch-Hiker (1953) She continued to act in films during the 1950s, but directed almost exclusively for television in the 1960s and 1970s.

She began to work as a film actress while still at school and had her first substantial role            in Alfred Hitchcock’s Spellbound in 1945. This was followed by supporting roles in The Spiral Staircase in 1946 and Out of the Past in 1947. Her first leading part was in the low-budget Adventure Island in 1947 and she then co-starred with Bing Crosby in A Connecticut Yankee in King Arthur’s Court (1949) where she exhibited her singing ability. She was renowned for her beauty as much as her acting and was dubbed “The Queen of Technicolor” for her green eyes and flaming auburn hair. Many of her subsequent roles were in B-pictures and undistinguished Westerns, with a few exceptions such as While the City Sleeps, and Gunfight at the O.K Corral and her later career was spent mainly in television.

Notable for his strong English accent, he was born in Russia to English parents and returned with them to England in 1917 at the age of 11 on the outbreak of the Russian revolution. He worked in an advertising agency before adopting a career in acting and made his British film debut in 1929. His upper-class English accent and suave manners established him in American films in the 1940s, including Rebecca and Foreign Correspondent for Alfred Hitchcock, and three films for director Alfred Lewin–The Picture of Dorian Gray, The Private Affairs of Bel Ami (both 1947) and Pandora and the Flying Dutchman (1951), though his greatest success was as the acerbic, cold-blooded theatre critic Addison DeWitt in All About Eve (1950), a role which he reprised to some extent as the supercilious and sarcastic husband of Ingrid Bergman in Robert Rossellini’s Voyage to Italy in 1954. His later career included historical epics such as Ivanhoe and King Richard and the Crusaders, after which he appeared mostly on television. He died, after years of waning health and depression, in 1972, apparently by suicide.

Possessor, like Sanders, of a very distinctive speaking voice, Price was perhaps best known for the series of horror films, loosely adapted from the work of Edgar Allan Poe that he appeared in during the 1960s under the direction of Roger Corman, such as The Masque of the Red Death, The Fall of the House of Usher, The Pit and the Pendulum and The Tomb of Ligeia, though he had dabbled previously in horror with films such as House of Wax in 1953 and the Boris Karloff Tower of London in 1939. He also played “straight” roles in three films with Gene Tierney in the 1940s–Laura, Leave Her to Heaven and Dragonwyck–and in the 1970s worked more often in television.

Of Hungarian origin, he emigrated to the United States and found work as a camera operator in Hollywood. His films include the silent classic Wings (1927) and several collaborations with director Robert Aldrich including Apache, Kiss Me Deadly, Vera Cruz and The Big Knife. He won the Academy Award for Ship of Fools in 1966.