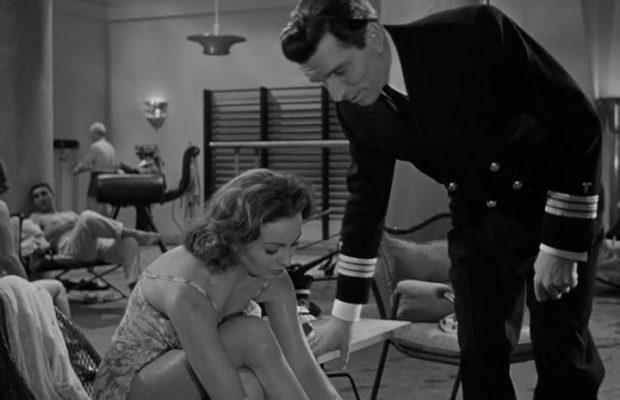 Toronto Film Society presented Dangerous Crossing (1953) on Monday, August 11, 2008 in a double bill with Impact as part of the Season 61 Summer Series, Programme 5. 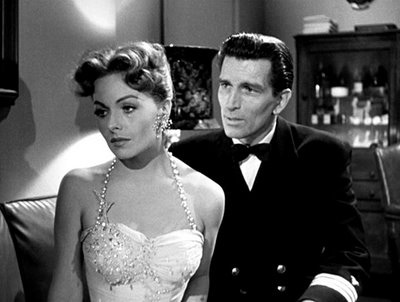 Dangerous Crossing is a film adaptation of a radio play called Cabin B-13 that was written by John Dickson Carr.  Screenwriter Leo Townsend was given the task of not only having to adapt the radio play to a film, but to expand the 30-minute play to 75-minutes.  He did so by inventing additional characters such as the German passenger with a cane and the stewardess.  The script was written in December of 1952 and went into production from January 9th to 30th.  It went two days over budget by allowing for one day when Jeanne Crain fell ill and another day for retakes in February.

Dangerous Crossing is a significant film because, not only is it a fine adaptation of Carr’s radio play and an exemplary example of the “impossible mystery” subgenre but also one of the last medium-budget crime films produced by 20th Century-Fox.  It was produced when television was threatening the financial basis of the film industry, and the major film studios responded by cutting back on costs.  With rigorous planning, the final cost of the film was only $519,000, while the film’s production values appeared to be those of a more expensive film.

Part of the reason for this was that the movie recycles various props, sets and costumes from contemporary and earlier productions such as Titanic, Gentlemen Prefer Blondes, both made in 1953 and the 1950 All About Eve.  Since the studio had a lavish ship set built on the Fox lot to produce Titanic, they re-used it for scenes in Dangerous Crossing such as in the scene when Jeanne Crain walks into a bar to wait for her husband.  Similarly, the pool in which Crain takes a swim is the same pool that Jane Russell is knocked into in Gentlemen Prefer Blondes.

The studio also utilized the talents of cinematographer Joseph LaShelle, who had worked on such big-budget crime films as Laura (1944), Fallen Angel (1946), Where the Sidewalk Ends (1950), and The Thirteenth Letter (1951), all directed by Otto Preminger.

At a time of falling audiences, these savings were not enough to generate a sufficient profit for the film, and its 75-minute running time meant it was relegated to those theatres that programmed double bills.  Therefore, half of the film’s rentals came from a flat fee rather than the more lucrative percentage fee paid by the major first-run theaters, grossing $903,000, with $500,000 of that total coming from the overseas market.  This was not considered a strong financial return and Fox soon moved in a different direction with the first Cinemascope film, The Robe.  And this new format’s success meant the end for low and medium-budget black-and-white crime films like Dangerous Crossing.

This nicely-made, tense little thriller about a bride with a missing groom and her fears for her sanity aboard a passenger liner is a remake of 1932’s Midnight Warning. In 1992, it was remade for TV as Treacherous Crossing. If the sets look familiar, it’s because Twentieth Century-Fox also used them for Titanic and Gentlemen Prefer Blondes (both also 1953).

Lovely Jeanne Crain was born in Barstow, California in 1925, the daughter of a high school English teacher, and grew up in Los Angeles. From the time she appeared in junior high school plays, she was determined to become an actress. While Crain was still in high school, Orson Welles asked her to do a screen test. Though she didn’t get the part, she was greatly encouraged by the experience. At 18, she enrolled at UCLA to study drama, but Twentieth Century-Fox signed her to a small contract, instead. She debuted with a tiny part in the Alice Faye musical The Gang’s All Here (1943). The following year, the hit Home in Indiana made her a star. Her years at Fox included such films as State Fair (1945) and A Letter to Three Wives and Pinky (both in 1949). Her role in Pinky brought her an Academy Award nomination. She left Fox in 1953, in the hopes of expanding her range beyond “girl-next-door” roles, moving first to Warner Brothers and then to Universal. After The Joker is Wild (1957), she took time off to be with her large family and do some TV work; she made only a few films after that.

Crain married actor-turned-businessman Paul Brooks (real name: Paul Brinkman) on New Year’s Eve’ in 1945, despite her mother’s objections. Crain was a devout Catholic and put her marriage and family first, taking all of 1947 off to have their first baby (the Brinkmans eventually had seven children). Though the marriage went through a rocky stretch in 1956 and came close to divorce, the couple managed to reconcile. In their retirement years, the Brinkmans enjoyed working on their ranches. Only two months after her husband’s death in 2003, Jeanne Crain died of a heart attack in Santa Barbara.

Tall (6’4”), strikingly good-looking Eric Alexander Rennie was born in Harrogate, Yorkshire, in 1909. It took quite a while for him to develop into Michael Rennie, the film actor. He worked as a car salesman and factory manager, not quite sure what he wanted to do. A minor job in Alfred Hitchcock’s 1936 film Secret Agent (as Robert Young’s stand-in) made him consider acting. He sensibly decided to get some experience on stage, working in repertory companies in York and Windsor before attempting any more films. He dabbled in small parts in British films before taking another time out to serve during World War II. He first trained as a fighter pilot in the United States under the Arnold Plan. When asked by fellow trainees in Alabama what he did in civilian life, no one would believe he was a movie star—until the movie Ships with Wings screened at a local theatre and Michael Rennie appeared onscreen as a Royal Navy pilot! Following his return to Britain, he spent the rest of the war working as a flight instructor.

Rennie’s first big British film success was in I’ll Be Your Sweetheart (1945), after which he found work as a leading man. His friendship with Tyrone Power (then working in Britain) led to notable supporting parts in The Black Rose (1950) and I’ll Never Forget You (1951). Those films introduced him to American audiences and won him a contract with Twentieth Century-Fox. Soon after he arrived in Hollywood, he was cast in his most famous role, that of the alien Klaatu in the science fiction classic The Day the Earth Stood Still (1951). But he was not impressed with Hollywood, saying, “Some people making pictures in Hollywood are not outstanding for brains. How their minds work, I can’t understand.” After working in mostly supporting roles, he returned to Britain in 1959.

As he noted, “My romantic reputation is an exaggeration. The realities are a bit different.” He was twice married and divorced, and had one son in wedlock (David Rennie, now a UK High Court judge) and one out of it (actor John M. Taylor). Rennie was a heavy smoker and suffered from respiratory problems for many years. During the run of Mary, Mary on Broadway in the early 1960s, he had to visit the hospital for assistance several times. For the movie The Battle of El Alamein (1968), his wheezy voice had to be dubbed. Rennie lived the final years of his life in Geneva, Switzerland, but died of emphysema in 1971 in England, while staying at his mother`s home to attend his brother`s funeral.

Carl Betz is best remembered for his work playing the dad on TV`s The Donna Reed Show, but he appeared in a number of films before moving on to television. The energetic, ambitious actor was born in Pittsburgh in 1921. Though he was also very athletic, the acting bug bit him early; Betz formed a repertory theatre company while still in high school, and then worked in summer stock. After a stint in the army during World War II, Betz graduated from Carnegie Tech. He worked as a radio announcer before making this Broadway debut in the play The Long Watch. This led to a contract with Twentieth Century-Fox, where he appeared in supporting roles. Betz moved on to television, first working in soap operas. In 1958, he was cast on The Donna Reed Show as Dr. Alex Stone, a job that lasted eight years. He followed that series with another hit TV show, Judd for the Defense (1967). Work on television and on stage kept him busy until his early death from cancer in 1978. He married only once, and the marriage lasted until his death.