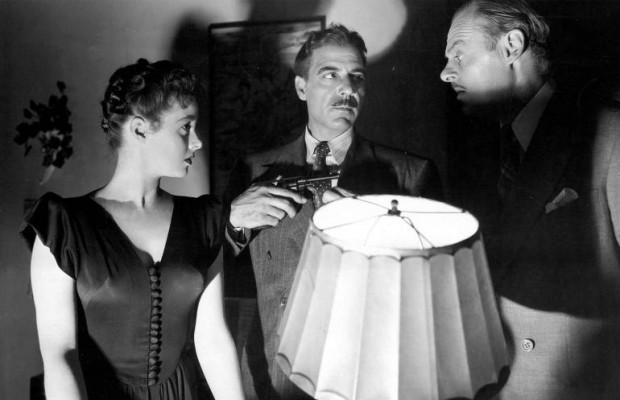 Toronto Film Society presented Deadline at Dawn (1946) on Monday, February 21, 1977 in a double bill with My Foolish Heart and the write up Susan Hayward – The Brooklyn Bernhardt as part of the Season 29 Monday Evening Film Buff Series, Programme 7.

Deadline at Dawn, a melodrama about an ingenious sailor’s effort to clear himself of murder, is Harold Clurman’s direction of a script by Clfiford Odets.  Some of Clurman’s direction is pure stage–some of which comes through very well; some of Odets’s writing is pure ham.  At its worst the picture is guilty of pseudo-realism and pseudo-poetry about the lost little people of a big city.  But on the whole I think it is a likeable movie.  Odets…is obviously one of the very few genuine dramatic poets alive.  And his good bits, to say nothing of his bad, are handled competently by Susan Hayward, disarmingly by Bill Williams and beautifully by Paul Lukas.

Deadline at Dawn was generally liked on its release, except by its director. In his autobiography, “All People Are Famous”, Mr. Clurman—a noted stage director whose only movie this was—writes: “I will not speak of Deadline at Dawn, a run-of-the-mill RKO movie I directed in 1945, for which Clifford Odets as a favor to me wrote the screenplay. What I remember best about the enterprise is the appearance of someone from the Johnson (censor’s) office to protest that Susan Hayward was showing too much cleavage; both Miss Hayward and I insisted that this was one of the more pleasing features of the picture. Miss Hayward, meeting me in the late sixties, took care to assure me that she had become rich and was about to make her first stage appearance.”

Bill Williams was an entirely likeable, if rather lightweight, leading man of the 1940s (Till the End of Time, Those Endearing Young Charms, etc.), whose career soon reduced him to the leads in “B” pictures plus supporting roles in some “A” movies. He and his wife, Barbara Hale, produced a son whose professional name is also his father’s real one—William Katt. The young man was widely noticed, this film season, as the only pleasant character of Brian de Palma’s peculiar Carrie. Underneath a great deal more hair, he looks a lot like his dad.