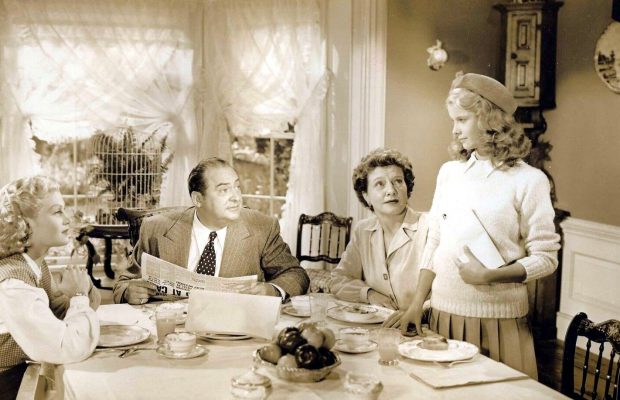 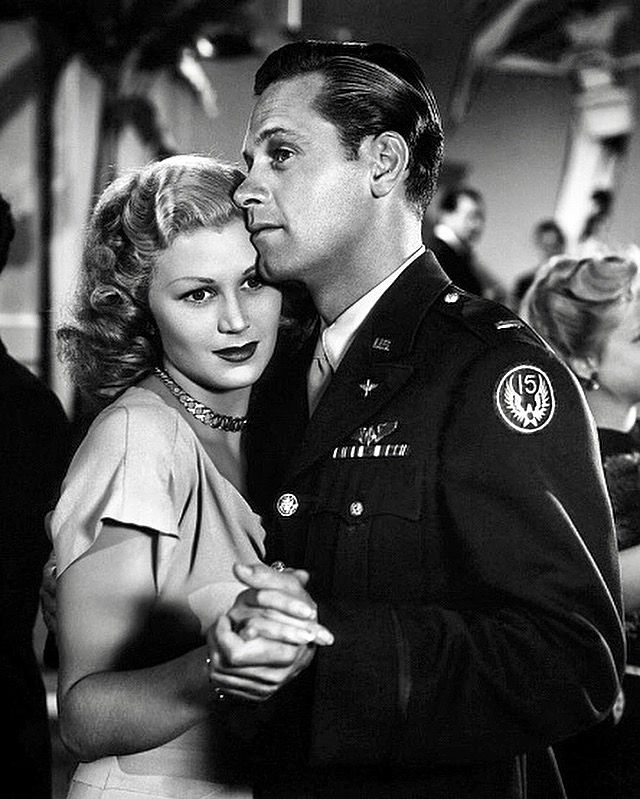 Both films shown this afternoon have some connection to J.D. Salinger, famous author and recluse, though this one is slight. Many have speculated that the name Holden Caulfield (protagonist of Salinger’s best-known work, Catcher in the Rye) may have been inspired by seeing the names of the two lead actors on a marquee for Dear Ruth.

Beautiful BEATRICE JOAN CAULFIELD (1922 – 1991) was a big favourite among cameramen in the 1940s, since it was virtually impossible to photograph her badly.  She had talent, too, and Paramount Pictures expected big things of her.  But the movie business changed after World War II, and her run as a movie star was surprisingly brief.

Caulfield was born in New Jersey, and attended Columbia University for a time.  Though she stood only 5’5″, she worked as a model with the John Robert Powers agency in New York.  This led to her start on Broadway in 1943, and a contract with Paramount Studios followed. Paramount put her into some major movies with some of their most prominent leading men right from the start.  In 1946, she played her first lead role, opposite Bob Hope, in Monsieur Beaucaire. This was followed closely by Blue Skies with Fred Astaire and Bing Crosby; 1947’s The Unsuspected with Claude Rains was a career highlight.  But Hollywood was changing and her heyday was soon over.  By the early 1950s Caulfield worked mostly in television.  After many TV appearances, she retired in the late 1970s, coming back only once to appear in an episode of “Murder She Wrote” in 1987.

Caulfield married twice, with both marriages ending in divorce. She died two weeks after cancer surgery in Los Angeles, at the age of 69, and her ashes were scattered over the Pacific Ocean. Though she is gone, she is certainly not forgotten: Joan Caulfield is the favourite actress of TV writer/ director Joss Whedon (creator of “Buffy the Vampire Slayer”). He often wears a T shirt with her picture on it, and tests people to see if they can identify her.

GUNTER EDWARD ARNOLD SCHNEIDER was born in New York City in 1890. He began acting on the New York stage, and made his first film with the Essanay Company in 1915.  After struggling with his weight for years, he finally threw in the towel and accepted being a character actor instead of a leading man. It was a happy decision; the burly actor with the deep baritone voice and authoritative manner was a popular screen personality for decades, and he made over 150 films.  He was even the star of some of them, such as 1935’s Diamond Jim. His portrayal of Diamond Jim Brady was such a success that he reprised the role five years later in the Alice Faye movie Lillian Russell (1940). Other successes included The Devil and Daniel Webster (1941) in which he played Webster. (The following year, in the propaganda short Inflation he got to play Webster’s nemesis, the Devil.) Arnold’s superb voice brought him a great deal of radio work. He performed as emcee with Edgar Bergen and Charlie McCarthy for “The Chase and Sanborn Hour,” and he portrayed a different president each week on ABC Radio’s “Mr. President,” which ran from 1947 to 1953.

Arnold was one of the first actors ever to run for political office.  He ran unsuccessfully for alderman in Los Angeles during the mid-1940s, losing in a close race.  At the time, he said that entertainment and politics were incompatible.  Arnold served as President of the Screen Actor’s Guild until shortly before his sudden death from a cerebral hemorrhage in 1956.