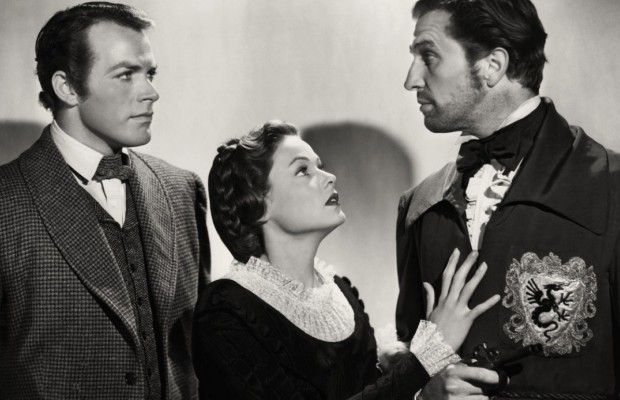 Set in 1850 in a gloomy, mysterious mansion on the Hudson River, the story covers the tribulations of a young girl from Connecticut who comes to a house of horrors.  This American Gothic delivers grim and shivery suspense throughout. – Barry Chapman

With shades of Hitchcock’s Rebecca, Dragonwyck is a lushly Gothic melodrama; abound with themes of social class; centering on the struggle between the rich and the poor in nineteenth century America. The most striking thing about Dragonwyck is the beauty of the piece. The sets are brilliantly Gothic, while director Joseph L. Mankiewicz keeps the atmosphere thick and foreboding, which in turn ensures that the film succeeds in capturing the best of its locations. The film reunites the two strongest cast members from Otto Preminger’s masterpiece ‘Laura’ – Gene Tierney and the master of the macabre, Vincent Price. These two are both great thespians, but it is Vincent Price that shines the most. Many people pass this great man off as merely a camp horror movie actor, but with his performance here; along with the vast majority of his later ones – Price proves that he is far more than that. His voice and mannerisms make up a lot of his performances, but it’s the subtleties that he hints at beyond his immediate performance that really make him great. Just like he did with The Fall of the House of Usher; Price plays one thing, while all the time hinting at a darker side to his character. – IMDB

Gene Tierney was born in Brooklyn, New York to Howard and Belle Tierney.  Her father was a successful insurance broker and her mother a physical education teacher.   On a trip to the West Coast, when she was seventeen, she visited Warner Bros. studios, where she met director Anatole Litvak.  Immediately impressed by Tierney’s striking good looks, Litvak told her that she should become an actress and that Warner Brothers wanted to sign her to a contract.  This was not to be, at the time, as Tierney’s parents advised against it, due to the relatively low salary offered and their ambitions of a higher social position for their daughter.   A bit later, becoming bored with society life, Tierney once again decided to pursue an acting career.   Tierney’s father determined that if his daughter was going to be an actress that it would at the very least be in the legitimate theater, steered her towards Broadway.   Tierney studied acting at a small Greenwich Village acting studio where she became the protégé of Broadway producer-director George Abbott.

Tierney’s first role on Broadway had her carrying a bucket of water across the stage in What a Life! (1938), on seeing the play, one critic remarked, “Miss Tierney is certainly the most beautiful water carrier I’ve ever seen!” Tierney went on to several more roles each with growing critical acclaim. Her father who continued to manipulate her career from behind the scenes setup a corporation, Belle-Tier, to fund and promote his daughters acting career.   In 1939, Columbia Pictures signed her to a six-month contract. Where she met Howard Hughes, who tried unsuccessfully to seduce her, being from a well-to-do family, she was not impressed by his wealth. Hughes found this to be a refreshing attitude and soon became a life-long friend. Her contract with Columbia soon ended with them failing to find Tierney a suitable picture. Returning to Broadway, her next role as Patricia Stanley in The Male Animal (1940) was both a commercial and critical success. Two weeks after opening, Darryl F. Zanuck from 20th Century Fox was in attendance and on seeing Tierney asked his assistant to note down her name.   Later in the evening, Zanuck ran into Tierney at a night club and not recognizing her stated to his assistant, “Forget the girl from the play. See if you can sign that one.” Tierney was quoted (after the fact), saying: “I always had several different ‘looks’, a quality that proved useful in my career.

Hollywood once again called and Tierney signed on with 20th Century-Fox. Her motion picture debut was a supporting role as Eleanor Stone in Fritz Lang’s western The Return of Frank James (1940), opposite Henry Fonda.   Tierney went on to act in a whole string of roles over the next few years.   In 1943, she was cast as Martha Strable Van Cleve in Ernst Lubitsch’s classic comedy Haven Can Wait, which signaled a upward turn in Tierney’s career.   In 1944, she starred in what would become her most famous role in Otto Preminger’s film noir Laura, opposite Dana Andrews. In 1945 she landed the role of jealous, narcissistic femme fatale Ellen Berent Harland, opposite Cornel Wilde, in the film version of the best-selling novel Leave Her to Heaven. Her performance won her an Academy Award nomination for Best Actress and became 20th Century-Fox’ most successful film of the 1940’s. It was cited by acclaimed director Martin Scorsese as one of his favorite films of all time, and he assessed Tierney as one of the most underrated actresses of the Golden Era. – David Burgess

Huston a fellow Canadian was born in Toronto where he attended Winchester Street Public School.  As a young man he worked he worked for his father at their construction company, while in his spare time he attended the Shaw School of Acting.  Huston made his stage debut in 1902, touring in the play In Convict Stripes and Julius Caeser.  In 1904 he married Rhea Gore and gave up acting to work as a manager of electric power stations in Nevada, Missouri.  He maintained these jobs until 1909 during which time he had a son, John in 1906.

In 1909, his marriage floundering, he began appearing in vaudeville with an older actress called Bayonne Whipple. They were billed as Whipple and Huston and in 1915 they married. Vaudeville was their livelihood into the 1920s. Huston began his Broadway career on January 22, 1924 in which he appeared in a play Mr. Pitt. Several following Broadway plays solidified his fame; Desire Under the Elms, Kongo, The Barker, Elmer the Great and Dodsworth.

Once talkies began in Hollywood, he achieved fame in both character roles and as a leading man. His first major role was portraying the villainous Trampas in the western The Virginian (1929) with Gary Cooper. He starred as the title character in the Broadway theatrical adaptation of Sinclair Lewis’s novel Dodsworth in 1934 and the play’s film version two years later. For his role as Sam Dodsworth, Huston won the New York Critic’s Circle Award for Best Actor and was nominated for the Academy Award.

Huston remained busy throughout the 1930s and 1940s, both on stage and screen (becoming one of America’s most distinguished actors); he performed “September Song” in the original Broadway production of Knickerbocker Holiday in 1938. Among his films are Abraham Lincoln (1930), Rain (1932), Gabriel Over the White House (1933), The Devil and Daniel Webster (1941), Yankee Doodle Dandy (1942), and Mission to Moscow (1943), a pro-Soviet World War II propaganda film as Ambassador Joseph E. Davies.

In 1941 Walter Huston portrayed the part of the ship’s captain who is shot while delivering the black bird to Sam Spade in the “Maltese Falcon“. This was an uncredited performance. Walter’s son, John Huston, directed the picture. John Huston as a practical joke had his father enter the scene and die over 10 different takes.

In 1948, he played Howard in The Treasure of the Sierra Madre, which was directed by his son, John Huston. The film was based on B. Traven’s novel, which told the story of three gold diggers in 1920s post-revolution Mexico. Walter Huston won the Golden Globe Award and the Academy Award for Best Supporting Actor for the film, while John Huston won the Best Director Academy Award, thus making them the first father and son to win at the same ceremony. – Wikipedia