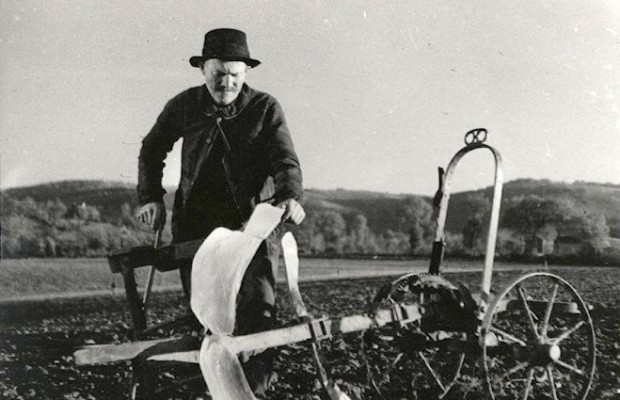 NOTE: Members who took out double memberships are reminded to inform their partners about this programme. Those not receiving programme notes by mail may obtain their copies at the theatre.

THE ART OF THE SOUND FILM IN FRANCE, a filmstrip by Roger Manvell consisting of a series of still from famous French films will be projected in the lobby from 7:45 pm to 8:10 pm.

SPANISH GYPSIES, an Actualite Francaise (documentary) was filmed at Sacro-Monte, Granada. It offers an authentic series of Flamenco folk dances and songs, performed by Juan Salido (Nino de Cadix), Tonia Castellanos (Flor de Mayo) and gypsy artists, not on a stage, but in the familiarity of a kitchen among members of a family and friends.

An analysis of public opinion, this picture weighs the influence of the press, radio, film and individual propagandist in enlisting mass support. Discussions, arguments and insults are tossed from one character to another and even involves the commentator. This method was introduced in the film WORD OF FLENTY in 1943 to handle a serious and controversial subject. In D.I.M.W.Y.T? the method is developed still further, even to the extent of having well-known English comedians in the case, such as the late Tommy Hanley who plays the soldier. In spite of the presence of professional actors, this is still a documentary film.

A SUGGESTION FROM A MEMBER: Would those who do not understand the language of the films, please try not to talk during the performance so as not to disturb those who would like to follow the dialogue.

With the exception of Cavalcanti’s impressionist RIEN QUE LES HEURES, the film FARREBIQUE is the first considerable documentary yet made in France. lt is a study of regional peasant life.

Georges Rouquier, 38, was raised on just such a  French farm as Farrebique. He spent three years planning the film and one year shooting it.  There are no professional actors-only farm family (Rouquier’s cousins) and their neighbors. The story is the true story of these farmers. The dialogue, written according to the temperament of each of the real characters is the harsh almost unintelligible dialect of the Rouergue district of the Department of Aveyron in Central France.

What distinguishes it from other documentaries with similar authentic techniques is the combination of traditional camera work with time-lapse photography. Rouquier has thus compressed in screen time those slow natural processes which the human eye cannot follow because of their very slowness: a whole afternoon passes in the sliding of a shadow, darkness washes over the intricate landscape like fast water. ln a sequence on spring, time-lapse and photo-micrography (extreme enlargement) have been used to develop the writhing upward and explosive unfurling and blooming of plants, a boiling of sap,   paroxysmic pulsing and dancing of all creation. The discreet yet effective use which Rouquier has made of time-lapse photography as a dramatic element confirms the prominent place he has won among modern documentarians.

TIME, March l5, l948 states: “It will probably be slow in winning the immense audience to which it speaks. Those who come to it purely to be entertained will be merely bored. Those who go to the film in its own sober spirit will find it deeply absorbing, moving, satisfying and chastening.”

THE NATIONAL ANTHEM used tonight is on 16mm film produced by Crawley Films,

Ottawa. The Executive is considering purchasing a print. (The cost is $10)

MUSIC FOR TONIGHT: Darius Milhaud’s Suite Provencel” will be played before the performance and during the Intermission.

EVALUATIONS OF CARNET DE BAL: l5 forms were returned, which is not thought to be discouraging as a beginning. However the tabulated results on so small a number can hardly be considered as representative of the reaction of the society as a whole. Twelve of those answering considered the film to be, “Good to Excellent”, three thought it to be, “Fair to Poor”.

From the evaluation forms turned in and from verbal comments the following remarks were compiled as being representative: “In spite of the handicaps of the print used (the worn sound track, brutal Quebec censorship and lack of English sub-titles), the fine qualities which make this film a classic did come through. –——

The nostalgic atmosphere, fine acting and characterizations were evident, BUT because the meaning of   film depends on the dialogue, even the detailed notes and intermission explanations did not suffice to make the film clear to those who couldn’t speak French —–

MORAL: lf your own personal opinion is not represented in the above selections – an evaluation form and let the Executive know what you do think, and thus aid them in their selection of programmes.

DREAMS THAT ONLY MONEY CAN BUY The Executive feels gratified by the support members gave to the showing of this avant-garde film. While this society had no financial connection with the project, we associated ourselves with it, as will several other Branches in Canada, in order to bring to the film the audience which would appreciate it most. Two more performances will be given at the Museum, Friday November 11th and $aturday November l2th, when Norman McLaren’s latest experimental film, BEGONE DULL CARE will also be shown.

THE NEXT EXHIBITION MEETING: NOVEMBER 28th

Cocteau’s BLOOD OF A POET – and a discussion on this film as a work of art.

1848  (at the Art Gallery of Toronto) a French film on political happenings using lithographs. Evening of November 23rd only.

LOUSIANA STORY (International Cinema) will probably not run beyond Friday   November 11th· No member should miss this Flaherty masterpiece.

THE WIZARD OF OZ (Uptown) a re-release of the famous story by Frank L. Baum.

THE WINDOW (in the neighbourhood houses) The late Ted Totzlaf’s suspenseful film. Not to be missed.

XSTEPS OF THE BALLET (Odeon Hyland) A Crown Film Unit short subject with Robert Holpman and others of the Sadler’s Wells Ballet Co.

2 Projectors: The Museum booth is now equipped with two 16mm arc projectors. There will no longer be any pauses between reels. Short films are occasionally run on the 35mm projector also in the booth.

ALL THREE OF THE FILMS on tonight’s programme come under the general heading of “documentary”. Two years ago when this society started in a small way, an evening was spent in attempting to define the word “Documentary”. Everyone finally agreed that “the term should be abolished, because of its limiting and misleading meaning”. At that meeting one speaker pointed out that the word “Documentary” was a tag or label introduced by Canada’s former Film Commissioner, John Grierson as a means of publicizing and promoting a general class of films which in those early days needed all the support to be gained from an easily recognized label. Grierson himself says, “Documentary is a clumsy description, but let it stand.”

However we are happy to be able to quote from Documentary Film News, May 1948  a prize letter which defines “documentary” in most precise terms   follows-—

{Ed. Note: What follows is a bit of funny business that relies heavily on visual jokes created by typography. If you would like to read the joke, please download the PDF of the original notes.}