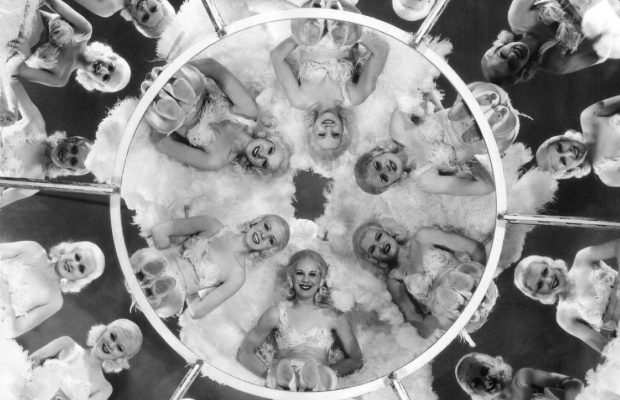 Toronto Film Society presented Fashions of 1934 (1934) on Sunday, September 24, 2017 in a double bill with Irene as part of the Season 70 Sunday Afternoon Film Buff Series, Programme 1.

Probably the most outstanding feature of Fashions of 1934 is the Busby Berkeley spectacle, a pageant of ostrich plumes decorating fifty lovely girls who form a Hall of Human Harps, a Web of Dreams and Venus with her Galley Slaves.  By 1934, Berkeley was looked upon as a kind of mad genius from whom wildly wonderful ideas sprang with ease.  He claimed that some of his creations came to him as he lay in his bath in the early morning, with the result that when he bounced into the studio with some fantastic concept the cry would be, “Oh, Buzz has just had a bath.”

Lawrence J. Quirk wrote that after seeing Fashions of 1934 in the 1980s that the audience couldn’t seem to make up its mind whether to laugh or gasp in awe at these elaborate Berkeley numbers, to say nothing of a fashion show sequence featuring styles so outlandish as to be stupefying.  Apparently, Bette Davis is so made up as to be almost unrecognizable as the Bette Davis people usually paid to see, nor did her scenes with Powell strike sparks, a clear case of wrong chemistry which the studio bosses should have had the foresight to recognize.  This was their one and only film together.

William Dieterle, who directed the film, later opined that Davis was very much in Powell’s shadow and resented it.  Moreover, Perc Westmore and Orry-Kelly saw to it the she was made up and gowned to the extravagant nines.  Bette recalled, “That kind of thing was for Harlow or Crawford—never for me.  In that picture I was frightfully ill at ease, and even felt embarrassed at times.

Davis was also annoyed at having to play onlooker to some protracted funny business between Frank McHugh and Hugh Herbert in the back of a car, and as the scene plays today, she is obviously impatient and annoyed beneath her tight smile and forced attentiveness.  “I’ve spent so much of my life being second fiddle—will it ever end?, she asked the producer, Henry Blanke.

William Powell, sensing her reservations concerning him, tended to keep his distance.  He was winding up his career at Warners that year, and was soon to go on to MGM and even brighter stardom.

Davis’s driven imagination extended to her recollections, especially when there was scorn involved.  “In Fashions of 1934, I played a fashion model in a long blonde wig and with my mouth painted almost to my ears,” she wrote in a Colliers magazine article in the mid-1950s.  “Imagine me as a fashion model!  It was ridiculous.  My leading man, William Powell, thought so, too.”  She went a little further in her book The Lonely Life, saying: “I was glamorized beyond recognition.  I was made to wear a platinum wig….The bossmen were trying to make me into a Greta Garbo.”

Actually, Davis plays a dress designer in Fashions of 1934, not a model; it’s her eyes, not her mouth, that Warners’ makeup department decided to elongate; her hair had been platinum for most of the pictures in this early phase of her career; the Fashions wigs weren’t particularly long and nobody at Warner Bros. could possibly have been under the delusion that Bette Davis was to be the new Garbo.

The critics were mostly kind, enjoying the film and Davis’s portrayal.  But since Bette didn’t, she told Kathryn Dougherty, editor of Photoplay that she felt the studio wasn’t taking her seriously, making her up to look like a “third-rate imitation of the MGM glamour queens.”  She never felt she looked beautiful, just hopefully striking, if she was lucky.  She felt everyone came off better than herself: Verree Teasdale with more sophistication and wearing clothes better, Powell being centre stage in a flattering role, and McHugh and Herbert stealing all the laughs.  She felt she was just standing around—like an afterthought.

She wasn’t even consoled with the romantic addresses of handsome young Phillip Reed, who plays a songwriter in love with her.  “He’s cute, but too boyish for me,” was her slough-off for the disappointed young Reed, who offscreen was one of many who became enamored with her.

Perhaps Bette’s biggest consolation was that her own black Scottie, Tibby, got to make a cameo appearance by sitting on a hatbox and being carried into a cab in Fashions of 1934.

History:
The Wall Street Crash of October, 1929 wet-blanketed virtually every facet of American cultural, political, and social existence except for box office sales. Conveniently, the technical miracle of cinematic speech was not yet two years old, and the public was so enthralled with it that the market’s crash had little to no effect on the public’s desire to witness the revolution that The Jazz Singer (1927) and the less famous but still revolutionary The Lights of New York (1928) had begun. What The Crash did influence was motion picture content, and Fashions of 1934 is a prime example of what the American public of the time both wanted and needed. As Lorraine LoBianco writes: “It was pretty routine stuff for the early 1930s when audiences went to the movies to try to escape the grim reality of the Great Depression. Women wanted to see fabulous clothes they could never afford, and to get hair-style tips from their favorite stars. Men wanted to see pretty girls. Everyone wanted to be entertained.”

With Fashions of 1934, they would indeed be entertained, though most of the time at the expense of the narrative’s structural integrity. The story’s lift off in New York is smooth, with Nash, the knavish Snap, and the talented Lynn Mason using their respective talents in the cunning bootleg and copy of Parisian models. Turbulence is encountered once the setting shifts to Paris, however. Film historian R. Bryant blames the writing: “The problems of Fashions of 1934 are numerous, but the most glaring is that writers F. Hugh Herbert and Carl Erikson seem clueless about how to develop the story after the action shifts to Paris. The film is fast-paced and reasonably funny until this shift, when it promptly falls apart. It seems that the writers threw in everything they could think of—a Berkeley number, an American con woman posing as a Russian duchess, a subplot involving an ostrich feather peddler…—one incongruity follows another and many threads are left dangling. It is as if everyone just wanted to get it over with” (96).

It is a summation that one might also extend to the film’s direction. Among director William Dieterle’s great biographical efforts, like The Life of Emile Zola (1937) and Dr. Ehrlich’s Magic Bullet (1940), and literary adaptations, like The Huntchback of Notre Dame (1939) and The Devil and Daniel Webster (1941), Fashions of 1934 is something of an oddity if we forget that to entertain was the age’s only aim. Dieterle, after all, was part of the post-war cadre of European émigrés who combined American money with European creativity to “secure Hollywood’s pre-eminence in filmdom” and who “brought into postwar America a new concept of reality and a new star image that contrasted with America’s ingénues and farmboy heroes” (Earley 39).

Bette Davis wasn’t having any of it, either. Despite a few glowing reviews for the film, she never felt that she and Powell gelled. “I had great respect for Mr. Powell as an actor,” said Davis years after Fashions of 1934, “but at the same time was not particularly motivated to co-star with him again. Likeable as he was, we just weren’t right for each other before the camera, and I think the onscreen results prove it” (Quirk, 83). She hated that she was glamorized virtually beyond recognition in the film, and felt that her talents were more substantial than what had been required of her. Tired of the fluff roles she was getting from Warner Brothers, Davis desperately wanted to play Mildred in the 1934 adaptation of W. Somerset Maugham’s Of Human Bondage. The role was so vile that no other star actress wanted it, yet Davis had to bombard Warner Brothers with constant persuasion to agree to loan her out for the film. She ultimately succeeded, and was forever proud of her performance. It was allegedly the only print of one of her films she ever owned (McNally 160).

Fashions of 1934 came near the end of William Powell’s stint at Warner Brothers, as well. Recently divorced from Carole Lombard, Powell only did one more film with Warner, The Key, before designating March 1, 1934 as the date he would begin work at another studio (Bryant 97). That studio was MGM, and by May, 1934, Powell would appear in what was likely his most famous role—The Thin Man’s Nick Charles, playing opposite Myrna Loy’s Nora.

Andrew Sarris quipped of Dieterle: “[He] was around on the set when many interesting things happened over the years, and it is reasonable to assume that he had something to do with them (255). Certainly the film is a bit of a narrative slouch now, but as a testimony of the society that both wanted and needed it, Dieterle’s hodgepodge of interesting things happening on a set is well worth a viewing.

Works Consulted: The American Cinema: Directors and Directions, 1929-1968 by Andrew Sarris; Bette Davis, The Performances That Made Her Great by Peter McNally; Fashions of 1934, entry on TCM.com by Lorraine LoBianco; Fasten Your Seat Belts: The Passionate Life of Bette Davis by Lawrence J. Quirk; An Introduction to American Movies by Steven C. Earley; William Powell: The Life and Films by R. Bryant