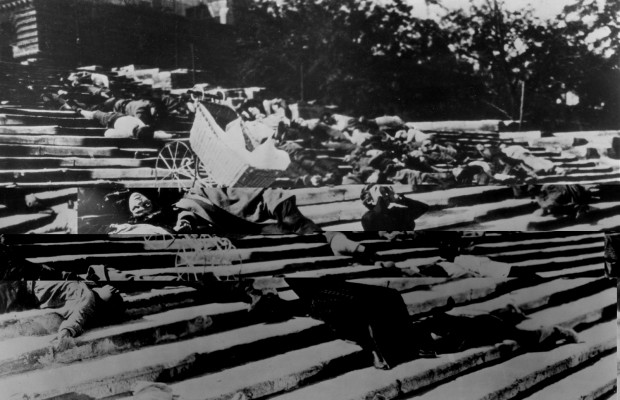 Norman McLaren’s interest in films dates from his Glasgow School of Art Days. At the G.P.O Film Unit in London he had the opportunity of making several experimental films, notably Love on the Wing and was influenced by his collaboration with Len Lye. In Ottawa, Norman McLaren has produced a series of animated films distinctive in technique and related imaginatively to the documentary approach.
Each of his cartoons illustrating French-Canadian folk songs is refreshengly experimental.

Puppets are used in Cadet Rouselle which is an animated treatment in colour of a French folk song which ridicules the affectations of the period between the French Revolution and the military order of Napoleon. In verse after verse cf the song Cadet Rouselle suffers all sorts of mishaps.

In creating La Poulette Grise McLaren set up his canvas and a camera as though he were gcing to produce animation by the conventional single frame exposure and movement technique. However instead of
so doing, he proceeded to put onto the canvas a pastel drawing and so, for several weeks, he altered the original drawing by the addition of as few as one or two strokes of new colour and exposed a single frame to record it. In this way he recorded a constantly changing image and since movement was not the predominant feature, as it took second place to colour, we might say that he produced on his finished film animated colour (rather than animated drawing). The effect of this song on film, about the little gray hen with its fantastic nesting places, is entirely haunting and fascinating.

The theme of this film is the world food situation, how it arose, and what the Food and Agriculture Organization of the United Nations plans to do — and asks the constituent nations to do – to increase the production of staple feeds and ensure an equitable distribution of them to the under—nourished millions of the world. It is a measure of Mr.Rotha’s skill of presentation that he manages to get a subject of this magnitude into a film of five reels without apparent over-crowding, without resorting to windy generalizations and without allowing his audience for a moment to forget the hungry eyes and aching bellies that lie behind the official figures. Its success in this last respect is perhaps the film’s greatest achievement. The power of the cinema to translate facts and figures into flesh and blood — and all too visible bone — has seldom been fullyexploited; but it has never been more fully exploited than in The World is Rich.

Equally remarkable is the uncompromising way in which this film faces the full implications of the issues which it raises. Responsibly, reasonably, with the help of such prominent personalities as Sir John Boyd Orr and the late Mr.La Guardia, a case is made for the abandonment of the present economic system in so far as it affects the production and distribution of food. It is not an impartial film. It favours the defenceless, hungry, ordinary man, and is strongly opposed to all those who are permitted by a system of free enterprise to gamble with, speculate in, corner and restrict the food he needs. Controversial? Yes, but the controversy
is one in which we are all involved as surely as we are involved in mankind. As Sir John says in the film, if the nations cannot agree about such a fundamental subject as the abolition of hunger and want, there’s nothing on God’s earth they will agree about. And if The World is Rich is shown as widely as it deserves to be, it will help bring agreement considerably nearer.

The film is not only impressive because of its subject matter. Again and again one is struck by the skill and meticulous care with which shots from innumerable sources have been collected and compiled. The commentary and the music, too, are on the whole admirably composed to bring out the full implications of the visuals. Yet there is something about the structure of the film which is untidy and confusing. The broad theme of argument, although never broken, is sometimes entangled in a knot of irrelevances, and sometimes doubles back on itself so that considerable concentration is required to follow it. This lack of clarity in development is not entirely due to the complexity of the subject, and has the unfortunate effect of making the audience work harder for its information than it should properly be asked to in a public cinema… Inspite of these defects, The World is Rich is a documentary film in the very highest class. In courage, sincerity, and importance of subject matter it is in a different category from the ordinary run of propaganda and public relations productions, and it merits the widest possible exhibition throughout the world. ~Documentary Film News, January 1948

Potemkin lasts only 50 minutes, but it has created mare comment than any ether film; it changed c0ncepts of filmmaking and influenced the development of the motion picture all ever the world. Originally conceived as a single episode in the story of the 1905 Revolution, the revolt of the sailors on the cruiser Potemkin became in the final cutting the theme of this film. The Odessa Steps sequence, “the classic sequence of silent cinema and possibly the most influential six minutes in cinema history” employed at the time of making original film techniques and new principles. A camera trolley was built the length of the steps; several cameras were used simultaneously; a camera was strapped to the waist of a running, jumping, fallingassistant; fragments of images (a hand, a smashed eye—glass, a parasol falling into the camera lens, a crazily bouncing perambulator, etc.) were juxtaposed by editing inte a sequence of vigorous impacts. Jay Leyda ccmments about this new precess of montage revealed by Potemkin: “The shots taken were filmed looking forward to the cutting table. Heretofore, the movement of a film had depended largely on the action within the sequence of shots. Eisenstein new created a new film-rhythm by adding to the content the sharply varying lengths and free associations of the shots. A new range of rhythmic patterns and visual dynamics were opened by Potemkin.”

Potemkin is run at its original silent speed. A synchronized musical score, from phonograph recordings will accompany the film.

It has been the desire of the Directors of the TFSG to meet members of the Society and discuss with them opinions regarding the films being shown. With this idea in mind Diana Sweets (across the road
from the Museum on Bloor Street) will reserve limited space on the night of January 24th in order to permit members who wish to come along and have coffee, to meet the Executive Committee.

Correspondence on Ivan the Terrible

Mr. Hanson’s letter an Ivan the Terrible (Prog. Notes for 3rd Performance) implies a rather hasty evaluation of the film. True, Ivan the Terrible did move at a leisurely pace, both by accepted standards and
those created by Eisentein himself in former films. But move it did with an inexorable and majestic force right from the sonorous opening depicting Ivan’s Coronation to the magnificently panoramic finale. Mr.Hanson expressed the idea that Ivan the Terrible reminded him of a colossal lantern slide productien. Indeed the film could be stopped anywhere during projection and the individual frame thrown onto the screen would reveal a gem af photographic art. Apart from that, however, I fail to see any resemblance between the production and a magic lantern work. It is more than just a succession of beautiful shots; it is a carefully planned and executed essay in scene composition. With regard to the charge cf theatricality of acting which cannot be denied, one can still ask whether such a treatment of characters in an epic drama is not infinitely preferable to the vulgarisms all too painfully evident in Hollywood productions of historical subjects. Like everyone of Eisenstein’s films, Ivan the Terrible has much to teach the serious student. I do not consider it his finest work, but I am willing to accord to Eisenstein the right of every artist — experiment. ~ Mrs. R. MacRae, Toronto

NOTE: It might prove interesting to members to read what Paul Rotha thought of Eisenstein’s later films, as Mr.Rotha was one of the first directors in Britain to accept the new Russian theories of montage. “Of his later films Nevsky and Ivan, I am not disposed to write, because to me they lacked the wonderful fire and the impulsive creative urge of the earlier works. Nevsky I found too stylized and too prearranged. The well known Battle of the Ice never roused me to heights of response as did the Odessa Steps or the Storming of the Winter Palace. It has always seemed to me that such a virile, impulsive mind as Eisenstein’s demanded current living material to shape, and not dressing-gown reconstruction from another age. Set against the insistent driving energy of Potemkin and October I found Ivan theatrical and slow, although others think
different.” ~ Forward to Eisenstein 1898-1948

One response to “Battleship Potemkin (1925)”