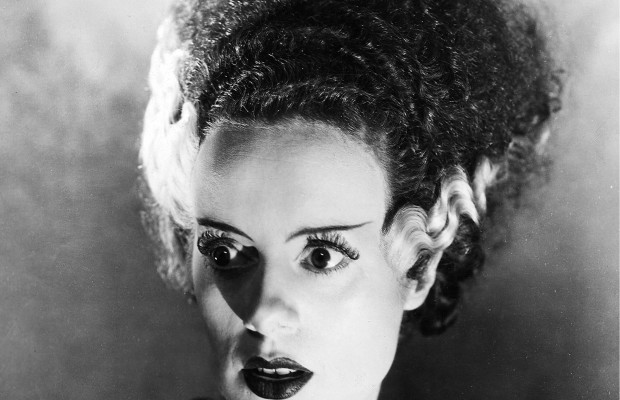 The Toronto Film Society presented The Bride of Frankenstein  on Friday, November 1, 2013 in a double bill with The Return of Doctor X, as part of the Season 66 Film Fright Night.

And so it came to pass that Universal gave unto the Monster a Bride –
“The Bride of Frankenstein!”

There can surely be nobody who wants to see “Bride of Frankenstein” and “Son of Frankenstein” who hasn’t already had an opportunity—although it is surprising how many people do manage to miss the most obvious films.  In my film history courses, I am constantly amazed at the number of people who have never seen “Citizen Kane” and “Modern Times” and desperately want to—and to whom “The Treasure of Sierra Madre” is already an old, long-ago classic, not too far removed in their minds from “The Birth of a Nation”.  In any case, we really need no excuse to show these two films; between them, they’re the best of their series, and good films as well as good horror films.  For some reason, we never have shown them; their last NY showing was at the Museum of Modern Art’s horror cycle a few years ago, and their last theatrical showing, in tandem, must go back some 15 years.

By far the best of Universal’s eight Frankenstein films (the monster’s activities dwindled after the first four, and in #8 he was merely a stooge for Abbott and Costello) “The Bride of Frankenstein” is probably also the best of the entire man-made-monster genre from any period.  If one judges a horror film only by the genuine fright that it inspires, then “Bride” perhaps might have to take a secondary position, but in terms of style, visual design, literate scripting, performance, music and just about every other individual ingredient, it is practically unsurpassed.  As an essay in Gothic grand guignol, it far surpasses its predecessor (which, good though it was, lacked pace and especially lacked the dynamics of a good musical score), and yet, despite its care and lavish budget, it also has an effective rough-hewn quality which the slicker and more polished later ones failed to realise, or more probably, deliberately avoided.

There are admittedly flaws in “The Bride”.  It tries a little too hard to become the absolute peak of its genre, and while it succeeded (so well, that it was not only the peak but also the climax of its particular cycle) its constant repetition of shock and sensation, from the first sequence on works against it.  One is never as afraid of the monster as one is in his first scene in the charred mill; with less shock, and a subtler handling of the character, Murnau’s Nosferatu and Mamoulian’s Mr. Hyde became more horrendous as their films progressed.  Also, the occasional mixture of sex and religion is sometimes appallingly close to being offensive, and is rescued only by James Whale’s ever-present sense of good taste.

Just as the original “Frankenstein” derived a great deal from “The Golem”, so does “Bride” (originally made and publicised as “The Return of Frankenstein”) also draw a great deal from some of the silent German fantasies.  The movements of Elsa Lanchester’s head, and the framing of her closeups, are quite clearly patterned on those of Brigitte Helm as the robot in “Metropolis”.  Indeed, Brigite Helm (and also Louise Brooks) was among the players Whale at one time had in mind for the role of the monster’s mate.

The film shows occasional signs of having been reshaped, with sequences transposed, after completion; and a cut that has always been there (after the monster has kidnapped Frankenstein’s bride) renders inexplicable one of Thesiger’s lines.  Continuity is a bit vague, and it seems as thought the redoubtable Baron Frankenstein has been living in sin for a while since he and his beloved are sharing the same quarters before their marriage.  The period is somewhat in doubt too, with Thesiger beating Alexander Graham Bell to the invention of the telephone (herein called just “an electrical device”) yet using a great deal of post-Bell equipment in his laboratory work!  The post-code moralities of the 30’s come through quite plainly however in the burgomaster’s admonition that “it is high time every man and wife was home in bed!”

But it seems churlish to quibble over such a lavish and enjoyable fairy-tale, which has genuine pathos to offer along with all its thrills.  Karloff’s performance is one of his best.  Incidentally, the scenes where he discovers the corpse of the young girl who is to be transformed into his bride were cut in Europe—thus making far less effective the scenes where he is ultimately confronted with another monstrosity.  Thesiger of course steals the whole show with a marvellously written and played bravura performance, though Dwight Frye also gets the best and juiciest liens of his career in this one!  Entirely studio-made (unlike “Frankenstein”, which did use one or two actual exteriors) “Bride” is never at too many pains to make its sets convincing, but since they are consistent, they work.  The trick work—especially involving Thesiger’s miniature people—is ingenious, and the laboratory scenes are the best and most elaborate ever created for this kind of film.  Waxman’s score, ranging from the march as the dim-witted villagers take to their torches yet again, to the peals of church bells when the bride is presented, is likewise superb.  The interior sets, making good use of painted shadows, and also of such standing sets the crypt—also used in “Dracula” and “The Mystery of Edwin Drood”, are all beautifully designed—though one does wonder what kind of oversized delinquents ran wild through the countryside with such regularity as to justify the prison presence of that huge stone throne and chains, conveniently just the monster’s size!

As with Dracula, the sequel, The Bride of Frankenstein, is considered superior to the original.  In a well-done prologue, Elsa Lanchester as Mary Shelley does far more acting than in her brief closing scenes as the man-made “bride” (not of Frankenstein, of course, but of his monster; the bride of Frankenstein, once Mae Clarke, had now become Valerie Hobson).  While a thunderstorm rages outside, Mary explains to the intrigued Shelley and Byron (visually well cast, Douglas Walton and Gavin Gordon) what really happened after the end of Frankenstein.

The monster’s survival is easily enough explained, by his having fallen through to the flooded cellar of the mill.  A few inconsistencies remain: not only Frankenstein’s bride but the burgomaster and the parents of the drowned child are played by different actors; also the boring Victor has disappeared without explanation, and old Baron Frankenstein has apparently died quite suddenly, as the doctor has inherited the title.  But these small discrepancies are soon forgotten as the story gets under way.

Another astonishing chapter in the career of the Monster is being presented by Universal on the Roxy’s screen. In “The Bride of Frankenstein,” Boris Karloff comes again to terrify the children, frighten the women and play a jiggling tune upon masculine spines as the snarling, lumbering, pitiful Thing that a scientist formed from grave-snatched corpses and brought to life with the lightning.

So vividly are etched the memories of the Monster’s first screen appearance that it seems scarcely possible that the original “Frankenstein” was shown on Broadway in December, 1931. Three and a half years was long to wait to learn whether the Monster died in the blazing tower where the end of “Frankenstein” left him. With this second chapter we know, of course, that he survived.

He had, one learns, taken refuge in the tower’s water-filled cellar and now, in “Bride of Frankenstein,” he clambers out, cuffs a few of the remaining villagers into oblivion and stalks once more through the moor, the graveyard and the hills, hated by man, gibbering at fire and—of all things—begging Frankenstein (Colin Clive, once more) to create a mate for him along the same general pattern.

In more ways than one, this is a changed Monster. At first, one must recall, he was pretty much of a thorough-going brute, a killer for the killing’s sake. Now, possibly under the unfluence of Spring at Universal, he is slightly moonstruck, hungry for kindness and even—oh, perish the thought—for love. He learns to speak, to smoke cigars and drink wine. “Good,” he says gluttonously, and points to the things he wants. “Bad!” he growls and shakes his square and metal-clipped head at fire. One will be amused at his softening, but it will be respectful amusement; one would not dare to laugh: he might snarl.

And so, driven by one force and another, poor Frankenstein and the wild-eyed Dr. Pretorious (who has experimented himself and created tiny humans which he keeps in small glass jars) go back into their laboratory, exhume more bodies, obtain a fresh human heart, harness again the power of the storms and convert Elsa Lanchester (Mrs. Charles Laughton in private life) into a bride for the Monster. It is rough on Miss Lanchester, but nothing to what happens to the lovelorn, calf-eyed Mr. Karloff.

The picture again ends with the apparent demise of the Monster—and his mate—but Mr. Karloff’s best make-up should not be permitted to pass from the screen. The Monster should become an institution, like Charlie Chan.

Mr. Karloff is so splendid in the rôle that all one can say is “he is the Monster.” Mr. Clive, Valerie Hobson, Elsa Lanchester, O. P. Heggie, Ernest Thesiger, E. E. Clive and Una O’Connor fit snugly into the human background before which Karloff moves. James Whale, who directed the earlier Picture, has done another excellent job; the settings, photography and the make-up (contributed by Universal’s expert, Jack Pierce) contribute their important elements to a first-rate horror film.