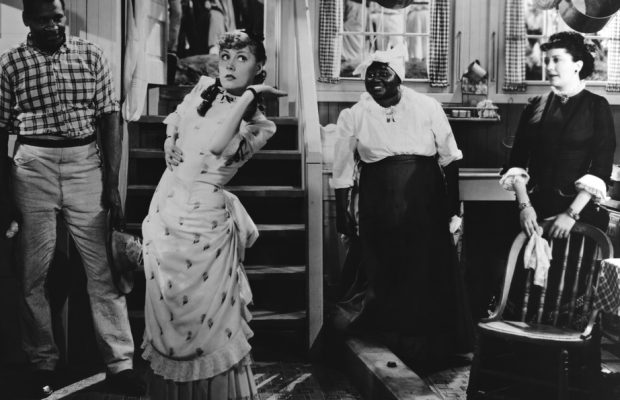 Toronto Film Society presented Show Boat (1936) on Monday, July 11, 1977 in a double bill with Carefree as part of the Season 30 Summer Series, Programme 2. 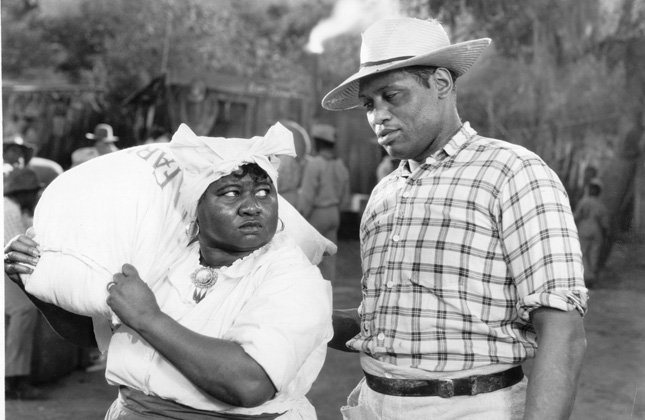 We have reason to be grateful to Hollywood this morning, for it has restored to us Edna Ferber’s Mississippi River classic, “Show Boat.” It really was too grand a piece to suffer neglect just because the stage had wearied of it. Universal’s excellent screen transcription, preserving the Jerome Kern score and accepting Oscar Hammerstein’s book and lyrics, is the pleasantest kind of proof that it was not merely one of the best musical shows of the century but that it contained the gossamer stuff for one of the finest musical films we have seen. The Radio City Music Hall should be proud of its new tenant.

Nine years have passed since Florenz Ziegfeld first produced the show on Broadway, and if there is a person in the land who has not heard its songs he must have been living in a mountain cave, minus radio, phonograph or an ear for a passing tune. But there are melodies that are timeless and voices that should be, and Universal’s “Show Boat” has both. We cannot recall how often we have heard Paul Robeson sing “Ole Man River,” but we do know we never have heard it enough, nor will we—not if we went to the Music Hall every day during the run of the film.

With scarcely less enthusiasm can we mention Helen Morgan’s singing of “Can’t Help Lovin’ Dat Man” and “Bill,” or Irene Dunne’s and Allan Jones’s liquid contribution of “You Are Love,” “Make Believe” and a brand new, specially written Kern-Hammerstein ballad called “I Have the Room Above Her.” There are two other new starters in the melodic line, one being the comic “Ah Still Suits Me,” sung by Mr. Robeson, and the other, “Gallivantin’ Around,” which Miss Dunne warbles behind a blackface make-up. The rest of the original score, including “Why Do I Love You,” forms the orchestral background and you should not have to be told how agreeably.

It is, of course, the music that makes “Show Boat,” but James Whale, who directed the picture, has had the perception to hold to its melodic qualities without losing sight of the cinema’s insistent need for action. Here is one of the few musical shows which is not merely a screened concert. The picture has a rhythmic pace and a balanced continuity of movement which is as exceptional as it is welcome. The story has been well told, drifting easily from sentiment and romance to gay comedy and gentle humor, with the song and dance interludes blending imperceptibly into its pattern.

Miss Dunne is splendid in the Norma Terris rôle of Magnolia Ravenal, née Hawks, daughter of Captain Andy of the showboat Cotton Blossom. Allan Jones, the romantic tenor, is equally well-cast and in equally fine voice as Gaylord Ravenal of Tennessee, gambler, spendthrift and idol of all the women on the river. Charles Winninger, veteran of the stage productions, figures once again as the irrepressible Cap’n, who manages to be on hand whenever that indomitable New Englander, Parthenia Ann Hawks, his good wife (Helen Westley), goes on the warpath—which is almost constantly. Then you will find Mr. Robeson as the roustabout, Joe, and Miss Morgan as Julie, who had Negro blood in her veins, and Queenie Smith as Effie, the soubrette, and Sammy White as Frank Schultz, her husband, and many others worthy of special mention.

It is a goodly company and they will take you enjoyably with them as the Cotton Blossom floats down the river, playing to gaping river-men and their wives, while Magnolia and Gaylord have their romance, their tragic separation in Chicago and their sentimental reunion years later at the theatre, where their daughter, Kim—named, as you probably recall, for Kentucky, Illinois and Missouri—is having a triumphal first night. Yes, Universal is to be congratulated this morning, and so are we, for “Show Boat” is in port again and we hope it finds safe harbor.