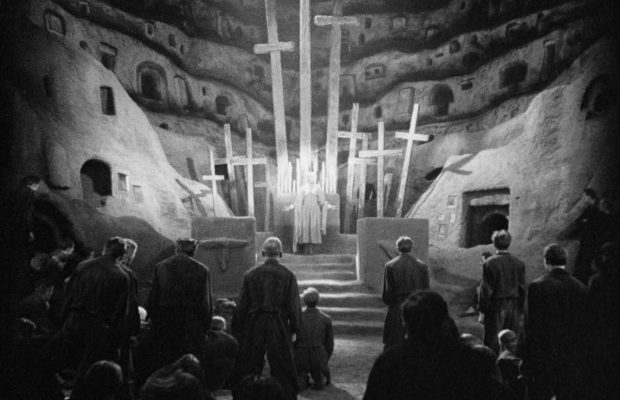 Several sequences from one of the lively and good-humored comedies of Fairbanks’ early period.  MMA Film Notes call it “an early trial balloon for The Three Musketeers“.

This melodramatic vision of a “city of the future” and the labor-capital troubles therein, created an international stir at the time of its release because of its imaginative set design, brilliant camera work and the demoniac drive of Fritz Lang’s direction.  Critics have never thought highly of its intellectual content and in that respect it certainly appears naive and shallow today.

However, its cinematic and visual qualities are still impressive, and Lang’s expertise in handling his camera and his mobs of extra players provides considerable excitement–in fact, the deployment of crowds in some sequences is pretty close to ballet!

The acting, for the most part, is very much on the bravura side–most effectively in the case of Brigitte Helm in her dual-role as the saintly heroine and the vicious robot-woman; most unfortunately at times in the case of Gustav Froelich, who has himself a bit of a field-day as the idealistic young hero.  This actor happily learned greater restraint and skill in later years as exemplified in such sound-films as A Waltz by Strauss and The Sinner.  Miss Helm went on to gain laurels in G.W. Pabst’s The Love of Jeanne Ney and L’Atlantide.

We regret to note that (as in all North American showings) this version is shorter than the complete German original.

FRITZ LANG, first known as the creator of such national-myth and fantasy spectacles as Siegfried, Kriemhilde’s Revenge and Destiny (the first and third which have been shown in earlier Silent Series season), later became a specialist in high-grade crime melodrama with a social theme.  Among his more celebrated works in this field are: M, The Testament of Dr. Mabuse (both silent and sound versions), and in the USA, Fury, You Only Live Once, The Woman in the Window, Scarlet Street, The Big Heat, and the anti-Nazi Hangmen Also Die and Man Hunt. His last few films have been pretty undistinguished thrillers.