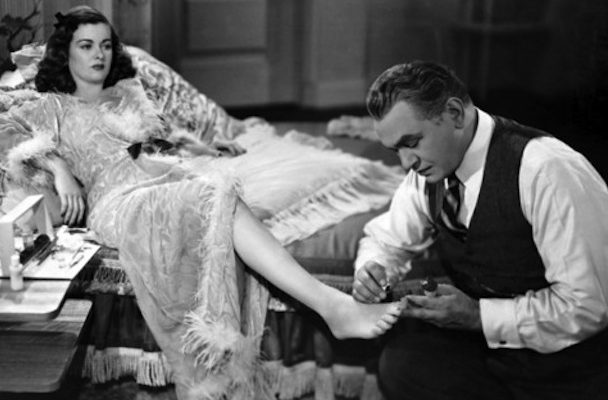 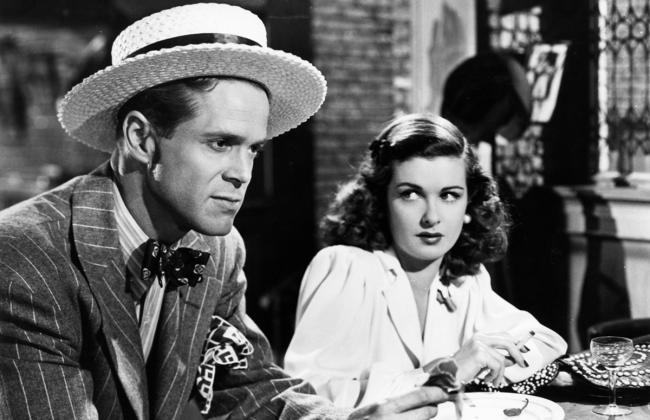 This film, directed by Fritz Lang, is an American remake of La Chienne, a 1931 French film by director Jean Renoir. La Chienne, which literally translates into ‘The Bitch’, was based on the novel by Georges de La Fouchardière and the play by André Mouëzy-Éon. In the French versions, the femme fatale was a prostitute, and her boyfriend was her pimp. As it was necessary to be more subtle for U.S. audiences, the female lead is a reluctant con artist, who is egged on by her opportunist boyfriend. But the story is in the movie’s title: Scarlet Street, which hints at ‘red-light district’ and there is no such street by that name in the film. Instead, Scarlet, being an antiquated term for a sexually promiscuous and, perhaps even, opportunistic woman, alludes to Kitty’s unscrupulous use of her sex appeal for personal gain.

The characters have been toned down for American audiences: ‘Kitty’ (played by Joan Bennett) is a beautiful, but essentially lazy, woman who occasionally works as a model. She’s so lazy, her roommate tries to motivate her to work, and her boyfriend gives her an apt nickname. Dan Duryea, as Kitty’s boyfriend, turns in another fine trademark performance as a smarmy weasel and small time crook. Edgar G. Robinson plays the hapless dupe who finds himself infatuated with Kitty’s charms.

Although this film’s portrayal of the characters is rather tame by today standards, the film was banned in 3 cities in its 1946 release. New York City was the first to ban the film on January 4, 1946 using a statute that gave the City power to censor films; a statute allowed films to be censored if the films “would tend to corrupt morals or incite crime” and it were considered “obscene, indecent, immoral, inhuman, sacrilegious.” A week later, Scarlet Street was banned by The Motion Picture Commission for the City of Milwaukee under a policy encouraged by the police department for “stricter regulation of undesirable films.” Then, on February 3rd of that year, Christina Smith, the city censor for Atlanta, banned the film, saying it was “licentious, profane, obscure and contrary to the good order of the community” due to “the sordid life it portrayed, the treatment of illicit love, the failure of the characters to receive orthodox punishment from the police, and because the picture would tend to weaken a respect for the law…”  Failure of the characters to receive punishment? Obviously, this censor didn’t watch the film to the end; suffice it to say, Kitty and her boyfriend do not fare well!

Nevertheless, Universal Pictures and Diana Productions sued the City of Atlanta, claiming that the censors didn’t have the authority to ban the film. However, when the case went to court, the production companies chose not to challenge the constitutionality of the censors because of protests made by national religious groups. It was a battle they chose not to fight perhaps knowing that local film distributors could and would self-censor films, and that would influence what films were selected to be shown in certain jurisdictions, impacting the bottom line of the studios and production companies.

Of special note, the paintings used in the film were done by set designer, caricaturist and painter, John Decker. He was a very talented artist who had been commissioned by some of Hollywood’s elites of the day to paint their portraits. One of his most famous paintings was of his friend and drinking companion, W.C. Fields as Queen Victoria, which hung in Chasen’s Restaurant in West Hollywood for many years. An oil painting of John Wayne commissioned by the actor sold for $71,700 at a John Wayne estate auction in 2011. The twelve paintings that Decker created for the film were sent to the Museum of Modern Art in New York City for exhibition in March 1946. Sadly, a life of hard drinking with the likes of W.C. Fields and John Barrymore resulted in John Decker’s death at age 51 in June of 1947.

Notes by Carol and Bruce Whittaker