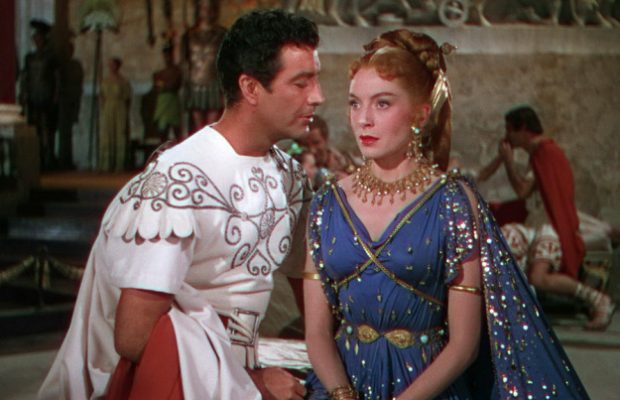 The plot of Quo Vadis at first glance bears a striking similarity to that of Cecil B. DeMille’s 1932 films The Sign of the Cross.  Marcus Vinicius, a popular Roman officer serving under Nero, falls in love with a Christian girl named Lygia.  He attempts first to buy her as a slave and then asks Nero that she be given to him as a reward for his victories.  With the aid of her powerful manservant Ursus, Lygia flees from Marcus to hide with other Christians in Rome.  He follows her, forces her to admit that she shares his passion, and is gradually converted to Christianity.  When Nero sets fire to Rome, Marcus leaves the court to go to Lygia’s aid.  The jealous Poppaea, who has been rejected by Marcus, persuades Nero to blame the fire on the Christians and Marcus and Lygia soon find themselves facing death in the arena.  Luckily, the crowd revolts in their favour and the film ends with the death of Nero the acclamation of a new Emperor.  What primarily distinguishes Quo Vadis from DeMille’s earlier effort is the sheer size and sprawling grandeur of the production–at a cost of 8.5 millions, Quo Vadis was the most expensive film produced up to that time and went on to gross over 12 million at the box office.  Shot in Rome at Cinecitta Studios, the film took nearly a year to photograph, with most of the work taking place in the sweltering heat of summer.  An army of extras was hired–indeed, as Peter Ustinov comments in his autobiography Dear Me, “the production of an American epic is the nearest peacetime equivalent of a military operation, with time as the enemy.” 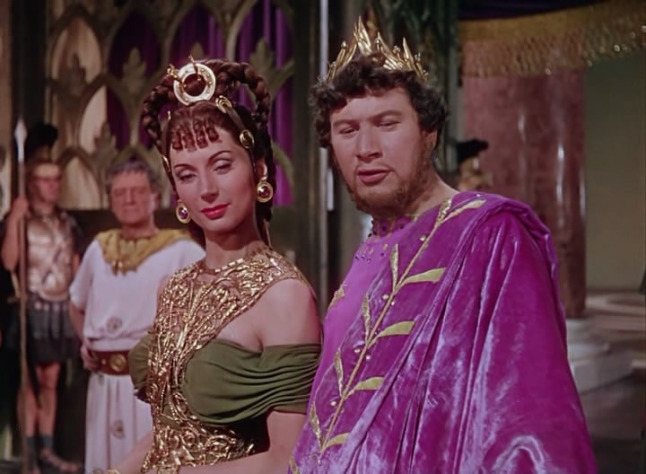 MGM’s decision to become involved in such a massive undertaking was undoubtedly influenced by the world-wide popularity of the 1912 version of the film–an Italian spectacular that had earned its producers ten to twenty times their original investment.  Originally, the studio bosses gave the job to John Huston, only to later change their minds and assign Mervyn LeRoy to the project.  Born in San Francisco in 1900, LeRoy started to work as a newsboy at the age of 10, his father’s grocery business having been destroyed in the great earthquake of 1906.  Soon, he became an actor, working for a long time in vaudeville as part of a twosome called “LeRoy and Cooper: Two Kids and a Piano.”  Eventually, he landed a job in the wardrobe department of Warner Brothers, rose to become assistant cameraman and finally director.  LeRoy can be credited with starting the Warner Brothers cycle of 1930’s gangster films with the spectacular success of his 1930 film Little Caesar.  Other well-known films of LeRoy’s include I Am a Fugitive From a Chain Gang (1932), Gold Diggers of 1933 (1933), They Won’t Forget (1937), The Wizard of Oz (1939), Waterloo Bridge (1940), Blossoms in the Dust (1941) and Random Harvest (1942).  In spite of his reputation for unbroken success, LeRoy was nervous about taking on Quo Vadis.  As he writes in his autobiography Take One: “I knew the enormity of the project.  I knew the logistics were such that it could easily go wrong.  I knew a picture of that magnitude could, if I erred badly, wreck the studio.  There was a lot riding on it and I had the jitters in a big way.”  Quo Vadis, however, was not only a commercial success but a critical one as well, being nominated for eight Oscars.  Though it failed to win in any of the eight categories, this is perhaps scarcely surprising in a year that saw such heavy competition as The African Queen, A Place in the Sun, and A Streetcar Named Desire.

The film nevertheless attracted its fair share of adverse critical comment.  The New York Times reviewer found it “bewilderingly heterogeneous…a staggering combination of cinema brilliance and sheer banality, of visual excitement and verbal boredom, of historical pretentiousness and sex.”  Films in Review went even further: “A phenomenon disturbing in its childish sensationalism, and in a vulgarity which lacks even the saving graces of gusto and energy.”  Other critics felt that Robert Taylor and Deborah Kerr wer weak leads, quckly upstaged by Peter Ustinov’s bizarre, commanding performance as Nero.  Ustinov won an Academy Award nomination for Best Supporting Actor for his work in this film, with a second nomination going to the one man he consistently failed to upstage–the quiet, compelling English actor Leo Genn.  Genn’s performance as Petronius gives the film what verbal wit it possesses and his romance with a slave girl was described by one critic at least as “the most touching thing in the film”  Also worth noting is the performance of Finlay Currie as the Apostle Peter.  Best known for his role as Magwitch in Lean’s Great Expectations (1946), Currie has appeared twice before in this series, as the older fisherman in I Know Where I’m Going (1947) and the former convict in People Will Talk (1951).  Finally, there is Buddy Baer as Ursus.  Brother to the world heavyweight campion of 1934, Baer is physically well-qualified for his role and it is interesting to note that it was his nephew who played “Jethro” on T.V.’s long-lived “Beverly Hillbillies” series.  Sophia Loren can be seen working as an extra in many of the crowd scenes, her beauty having caught LeRoy’s eye, and Elizabeth Taylor is also supposed to be briefly visible, having decided to hide for a few days from her estranged husband among LeRoy’s extras. 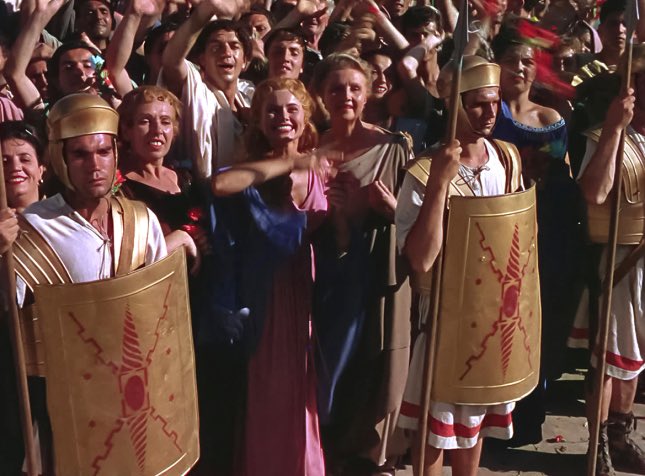 The art direction for the film was done by Cedric Gibbons whom Ephraim Katz describes as “the most celebrated and possibly the most important and influential production designer in the history of American films.”  In this film, LeRoy handed him a special challenge–note, in the arena scenes, the Roman banner marked LXII (62).  As LeRoy explains in his autobiography: “In all my films, I’ve used the number 62–from the house at 62 Geary Street where I was born–but it was hardest to squeeze that lucky number into Quo Vadis.”

Reading the autobiographies of those involved in the production, one comes across a number of amusing incidents, two of which are  perhaps worth reproducing here.  The first is LeRoy’s account of his difficulty in getting his fifty hired lions to take a proper degree of interest in the actors presented for their consumption.  Even after two weeks without food, the lions refused to appear properly ferocious.  LeRoy comments: “I still don’t know how the ancient Romans staged their bloody circuses.  I am probably the only living soul who ever tried to coax a lion into eating somebody, and I tell you they just won’t do it….I never did get the scene exactly as I had wanted.”  The second incident, recounted Peter Ustinov, reveals LeRoy in the grip of the same passion for detail:

Let me not forget Mervyn’s inspired instruction to a couple of mountainous wrestlers, one Italian, one Turkish, who were supposed to kill each other with savage grunts and groans for my pleasure as I nibbled at larks and fondled my favorites!  “Action!  And make every word count!”