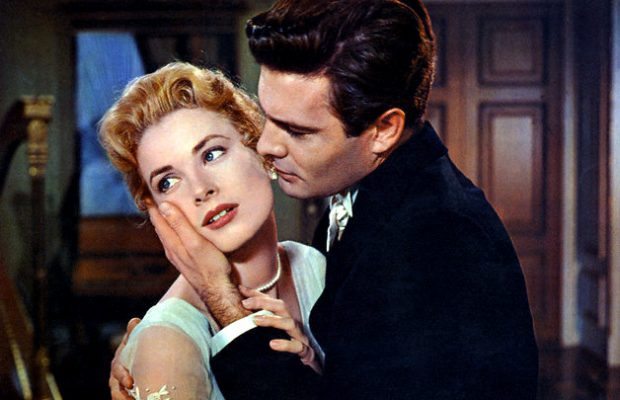 Toronto Film Society presented The Swan (1956) on Sunday, February 12, 2017 in a double bill with The Princess Comes Across as part of the Season 69 Sunday Afternoon Film Buff Series, Programme 5.

In Steven Englund’s book, Grace of Monaco, he wrote that myth would eventually have it that the idea for making a movie of Molnar’s play, The Swan, occurred to MGM as an afterthought to Grace and Rainier’s wedding announcement in January 1956; art imitating life, as it were.  In fact, the idea of Grace’s playing Princess Alexandra in The Swan had been suggested to her the previous April, before she’d even met the Prince.  Metro’s story department had thought it a perfect part for her.  Grace, with her special interest in theatrical roles, especially classics, eagerly read it.  The drawback was that this was another ornate period piece with everyone decked out in elaborate costumes, bowing to one another and speaking stuffily.  As well, Alexandra herself was, at first glance, a rather treacly and passive character, acted upon by strong-willed others.  Nevertheless, the central motif of The Swan—the subordination of love to duty—was a strong and universal theme that personally interested Grace.  Uncertain, she hesitated a time and scanned other scripts but The Swan was by far the least objectionable.  The alternative was to exhaust MGM’s goodwill with further rejections, or to leave pictures entirely.  We know what she chose.

In Alec Guinness: The Authorised Biography, Piers Paul Read wrote that Alec was clearly fond of, and also intrigued by, Grace Kelly.  “Here I sit,” he wrote to his wife Merula on November 14th, “having just dismissed (the talented and distinguished British stage actor and director) Peter Glenville (who also acted in and directed film which included his last, The Comedians (1967) starring Richard Burton and Elizabeth Taylor) and Louis Jourdan who have been having drinks in my bungalow.  I’ve spent the evening with Louis and his wife, just the three of us, in scandalous gossip, mostly about Grace Kelly, who for all her sweetness we think is Miss Enigma 1955-1975.”  And clearly Grace Kelly was fond enough of Alec to continue with a long-running practical joke: before leaving Asheville for New Orleans, he had bribed the hall porter of the hotel to put a tomahawk that had been presented to him by a visiting troupe of Indians between the sheets of Grace Kelly’s bed—he had judged it too heavy to put in his suitcase.  Grace Kelly, however, took it with her trousseau when she married and managed to return the tomahawk to Alec between the sheets of his bed in London.  The tomahawk was passed to and fro this way over the next twenty-five years.

During filming, Alec Guinness met James Dean, just days before the young actor’s death. Sir Alec later recalled predicting that Dean would die in a car crash. When Dean showed Guinness his newly-bought Porsche, Guinness advised him to “Get rid of that car, or you’ll be dead in a week!” Guinness unfortunately proved right.

Grace Kelly became a real princess when she married Prince Rainier of Monaco the same year that this film was released.

MGM released the film on April 18, 1956, to correspond with the wedding day of Grace Kelly and Prince Rainier of Monaco.

The film was shot on location in North Carolina, at the 1895 Biltmore Estate of George Vanderbilt (situated in Asheville) and at Lake Junaluska.

Rex Harrison and Joseph Cotten were offered the role of Prince Albert.

In Grace Kelly’s penultimate film, she portrays the pivotal role. The story itself revolves around Hungary’s Crown Prince Albert’s required selection of a wife, and the intrigues surrounding his reluctant search. All in sumptuous Technicolor! – Barry Chapman

A mild Molnar comedy of manners has an attractive cast but not much sparkle. Jourdan is good as Kelly’s suitor, but she’s promised to prince Guinness. Filmed before, in 1925, and (as One Romantic Night), in 1930. – Leonard Maltin

Let this be said at the outset: any sly suggestions that The Swan is a piece of contrived publicity for some recent romantic goings-on are absolutely baseless and should be discredited. Its characters have no similarity to actual persons, living or dead. It says so, in fine type, at the bottom of one of the credit cards.

However, it is true that this picture, which arrived yesterday at the Music Hall, robed in such beauty of production as can be afforded by Metro-Goldwyn-Mayer, is a slender and charming fable, as soft as a summer breeze, about a princess in a Ruritanian country that was a myth before World War I. And the fact that she is played by Grace Kelly, who has herself been romancing a bit of late, is purely coincidental. You can dismiss that aspect, from here on.

For the pleasant surprise is that Miss Kelly and her present entourage, which includes Alec Guinness as a crown prince and Louis Jourdan as a fleeting light of love, are entirely enclosed in a vacuum of Old World make-believe, wherein they play out their whisp of regal whimsey with humor and quaint gentility. Far away, both in time and social status, are the world and reality.

It is a trifling matter that this film is from a Ferenc Molnar play that was a bit of a spoof when done in Hungary nigh on to forty years ago. The jest has not lost its piquant savor—nor the romance of its tenderness—with age. John Dighton’s script and Charles Vidor’s direction have freshened them admirably.

Miss Kelly’s Princess Alexandra is still a gauzy and diffident girl who accepts the necessity of a royal union with some reluctance and momentary pain. Mr. Guinness’ Crown Prince Albert is still a pompous petitioner for her hand who would rather play soccer or the bull-fiddle than go through all the stiff formalities. And Mr. Jourdan’s Professor Agi is still the handsome young tutor who has a flash of hope and defiance when the princess turns to him briefly with a look of love.

What Mr. Molnar was observing was the irony and pathos of a girl being compelled to prepare for matrimony before the brook and the river have fairly met. And that is all they’re noting in this picture, amid a great deal of surrounding elegance—that and the humorous circumstances of a mother trying to get her daugther wed.

Jessie Royce Landis, who was the mother of Miss Kelly in To Catch a Thief, stands in the same relation to her and performs with much the same motherly frenzy in this film. Estelle Winwood is deliciously daffy as a broken-down aunt and Brian Aherne adds a touch of quiet humor and compassion as a royal uncle who has become a Franciscan monk. Agnes Moorehead shrills with her usual clamor as the Prince’s commanding mother, and Leo G. Carroll is mellow as the major-domo of the mènage.

And that mènage is something! Don’t ask how a family that has lost its heriditary rights and emoluments should be living on an estate that is absolutely identical to the Vanderbilt’s great Biltmore House near Asheville, N.C. The only explanation is that Dore Schary, the producer, arranged for his company to shoot the film on that location—and happily so, for it makes a beautiful setting, in color and Cinemascope.

Indeed, the whole production is a masterpiece of the designers’ and the costumers’ work, and is as easy to look upon for almost two hours as it is pleasant to listen to. The experience is a bit like eating the food at a wedding reception and sipping the light champagne, but that should be no discouragement to Miss Kelly’s vast multitude of fans, who will no doubt welcome the opportunity to do just that with her. – The New York Times