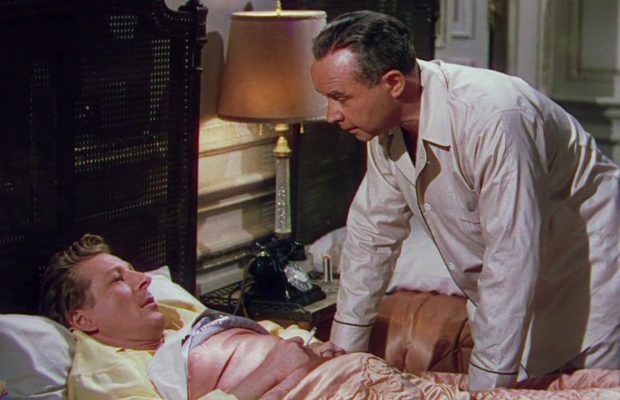 Danny Kaye fills a special niche in screen comedy, somewhere between a slapstick goon and a musical-comedy charmer.  The four or five Goldwyn comedy-thrillers with which he began his career invested him with a vivid character, that of the helpless, hapless, overgrown infant who fumbles and stumbles from one predicament to another until at last, and more by luck than judgment, the crooks and spies who pursue him are rounded up by copes and the everyday world regains its normal benevolence.  The stories and gags often come from the Bob Hope file; but Hope’s films always had the harder, dryer, wryer tone of hoofers and travelling salesmen struggling for bookings and commissions in a heartless world.  Danny Kaye came from some trusting, childlike nursery of his own, crystallised by the mother’s boy limbo of Walter Mitty.  He looked like becoming one of the screen’s great comedians.

Yet since the Goldwyn days, he, or his material, has languished, and in Knock on Wood he is as lost as Zeppo shorn of the three other Marx Brothers.  The germinal idea is fine, casting him as a schizophrenic ventriloquist whose unconscious mind uses his dummies, Clarence and Terence, to express his hatred of his gold-digging fiancee.  When his agent finally gets him to a psychiatrist, the spies hide the secret plans in the dummies’ heads.  On thing lead to another… (Kaye) gets framed as The Red-Headed Ripper, gets mixed up with the hard-drinking Oirish, disrupts a ballet performance by posing as a dancer, and so on.  Only this last sequence comes anywhere near vintage Kaye.

The difficulties of finding an adequate vehicle for an artist of such individual talents as Danny Kaye have rarely been overcome.  The pitfalls lie either in halting and irrelevant story to introduce equally irrelevant “numbers”–or in smothering the performer with an over-dressed story.  Knock on Wood stands and falls between these two rickety stools.  The numbers–some, notably Kaye’s Irish song, are very good–are snatched away too soon; the story…is not well enough built… There are considerable consolations meanwhile.  Kaye’s ballet sequence misses its opportunities; but his other big scenes–especially an English car salesman–exploits his talents well.  Funny motor cars have rarely been funnier than this.

Danny Kaye was born in Brooklyn in 1913.  He worked as an insurance adjustor, then became an entertainer on the Borscht Belt of summer resorts in New York’s Catskill Mountains.  Dave Harvey and Kathleen Young taught him to dance and put him in their act.  Later he became a stooge for Nick Long Jr. and also toured with Sally Rand.  He worked up a review with Max Liebman and Sylvia Fine (later Mrs. Danny Kaye) and the Shuberts took it to Broadway in 1939.  In 1944 he became a radio star with his own show.  His first two films Up in Arms (1943) and Wonder Man (1945) were an immediate commercial success.  His other films have included The Kid From Brooklyn (1946), The Secret Life of Walter Mitty (1947), The Inspector General (1949), Hans Christian Andersen (1951) and The Court Jester (1955).

Film and Filming: Kaye Dreams are Hard to Capture on Film, by P. Baker, December 1955