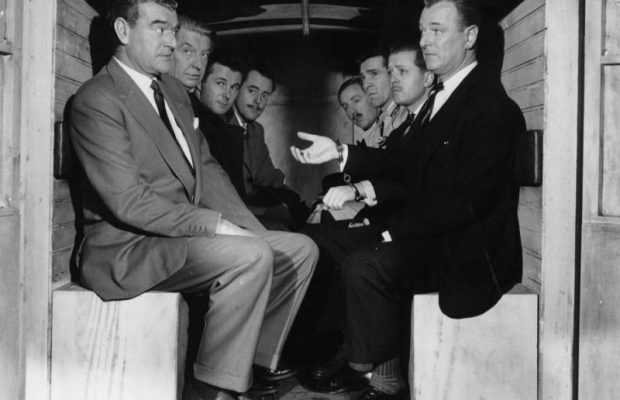 Toronto Film Society presented The League of Gentlemen (1960) on Monday, August 22, 2016 in a double bill with Fast Company as part of the Season 69 Summer Series, Programme 6.

The League of Gentlemen sounds like an impolitically-correct film gem.  There’s something to offend everyone.

In Mark Connelly’s The IRA on Film and Television: A History, he writes that Basil Dearden’s The League of Gentlemen is an action comedy about a team of army veterans using their wartime training to stage a daring robbery.  Deardon created an English caper movie laced with satiric asides, running gay gags—with Oliver Reed making an uncredited cameo appearance as an over-the-top effeminate chorus boy—and quips about Billy Graham and California cults.  Among the droll comedic elements is a sardonic IRA subplot.

Forcibly retired from the British army, Colonel John Hyde played by Jack Hawkins assembles seven cashiered officers with expertise in demolitions and communications to rob a London bank.  Hyde tells his men that stage one of the mission is to secure weapons and equipment, to be “supplied by our late employer.”  Their target will be an army command training center in Dorset.  Given recent events, Hyde has discovered a tactic to deflect suspicion:

“We shall have to provide the authorities with a scapegoat.  In this case I’m relying on the British character.  We British will always give the Germans, the Russians, the Japanese, or even the Egyptians the benefit of the doubt, but never the Irish.  So throughout this exercise if we use our accents judiciously, the IRA will get the credit and the blame.”

Dressed in British uniforms, Hyde and two conspirators impersonate senior officers making a snap inspection of the base to distract army personnel, while their comrades, posing as utility repairmen, break into arms lockers and seize submachine guns, explosives and gas masks.  The following day, one of Hyde’s men (Richard Attenborough), reads a newspaper headlined, “Daring Raid by Irish Rebels.”

In 1960 the IRA appeared harmless enough for a British filmmaker to parody without offense.  Within a decade, the IRA would reemerge in some of the most violent clashes since the Irish War of Independence fought from 1919 to 1921.

The League of Gentlemen was released in 1960; the same year as Ocean’s Eleven.  The films are similar in story: a retired military officer puts together a team of ex-soldiers to commit a robbery.  The League of Gentlemen plan to rob a bank; in Ocean’s Eleven, the group plan to rob Las Vegas casinos.  Jack Hawkins is an army colonel who has been forced to retire.  He recruits other ex-servicemen who all have their own personal grudge against the military.  They are all short of money and all have special skills learned in the military.  Hawkins plans the robbery with military precision and discipline.

Jack Hawkins was one of those actors who had a very commanding screen presence.  He is often remembered for World War II movies where he played a soldier, airman or sailor.  The truth is he made only five movies about WWII: The Two-Headed Spy, Angels One-Five, The Malta Story, The Cruel Sea and The Bridge on the River Kwai.

Hawkins was born in London in 1910.  His entertainment career began at age eight, when he joined his school’s choir; by age 10, he’d joined the local operatic society and appeared in Gilbert and Sullivan’s Patience.  His parents enrolled him in the independent theatre arts training school, The Italia Conti Academy in London.  He was a student there when at age 11 he made his London stage debut as the Elf King in Where the Rainbow Ends.  He appeared on Broadway at age 18 in Journey’s End.  He appeared in a number of films in the 1930s, but it was after service in World War II when eventually, as a Colonel in the Royal Welch Fusiliers, that his film career took off.  He made three films in 1951 and 1952: Angels One Five, The Planter’s Wife with Claudette Colbert and Mandy.  He was voted fourth most popular star in 1952.  With his starring role in The Cruel Sea in 1953, the most successful film of the year, he was voted England’s most popular actor.  His popularity declined in later years, but he was always a commanding presence in films like Ben Hur, Bridge on the River Kwai, Lawrence of Arabia, Lord Jim and Zulu.  He made numerous television appearances, as well, including a recurring role as an outspoken atheist in six episodes of Doctor Kildare.

Hawkins was a three-pack-a-day smoker for most of his adult life.  He eventually developed cancer of the larynx, and his last film roles were dubbed by actors Charles Gray or Robert Reitti, with Hawkins’ approval.  He was married to actress Jessica Tandy from 1932 to 1940 and to Doreen Lawrence from 1947 to his death in 1973.