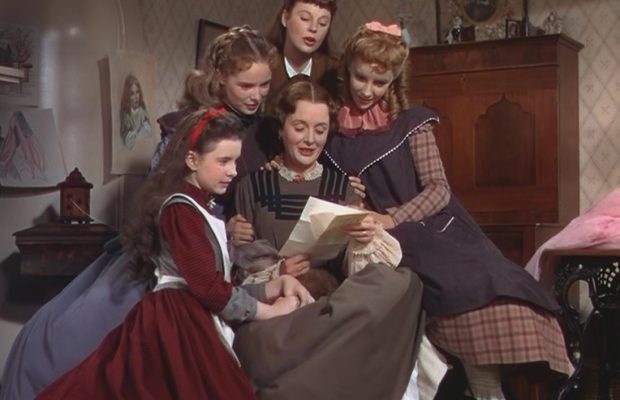 Toronto Film Society presented Little Women (1949) on Monday, March 21, 1983 in a double bill with I Married a Witch as part of the Season 35 Monday Evening Film Buffs Series “B”, Programme 8.

Louisa May Alcott’s Little Women, after 115 years still widely read, especially in girlhood, incarnates female fantasies as potent as the male ones embodied in Tom Sawyer and Huckleberry Finn.  Just as Huck and Tom deceive and flee from a series of maternal figures, and yet are “civilized” by them at the end, so the March girls find their security with Mother and, without Father, create for themselves a self-sustaining female society.  But whereas the male fantasies have dominated some of the greatest works of American literary art from Cooper’s Leatherstocking to Hemingway’s Nick Adams stories, the female fantasies have confined their domination to the great works of American popular culture, from Uncle Tom’s Cabin to Gone With the Wind.  Both fantasies allow the child to dissipate hostile feelings towards the parent; the male fantasy, disguised by art, corresponds to the female fantasy, masked in sentimentality.

The works embodying the female fantasy are, moreover, in their lesser artistry, closer to real life, and consequently more amenable to film.  Huckleberry Finn, filmed, is an absurdity, reduced to its boyish level; these are symbolic rather than real children, and cannot be effectively visualised.  Little Women, filmed, loses only its mythic dimensions; it retains all its realism as well as its fundamental sense of a closed female circle marked by feminine superiority.

But its very realism makes it the prey of prevailing mores, and the two familiar film versions, Cukor’s of 1933 and LeRoy’s of 1949, are betrayed by the contemporary attitudes towards self-sufficient women.  (There was an earlier version, actually shot at the Alcott home in Concord, which was released on a most suggestive date–November 10, 1918, symbolically the last day the girls had to themselves before the boys came home!)  Cukor’s is a depression movie, and Katharine Hepburn, as Jo, moves from being a hoyden to being a Hurrell vision of 1930s elegance, fit to take the floor with Fred Astaire.  June Allyson, in the 1949 version, easily gives up her tomboyish ways to become merely a good wife, and the love interest–in this year of Every Girl Should Be Married, Adam’s Rib, and The Father of the Bride–dominates the film.  In the novel, Jo sustains the family through her writing, earning $100 for her first accepted work.  In the 1933 film her first work brings her $1.50, which by 1949 has dropped to a dollar!  In the America of the postwar baby boom, the idea of a woman supporting the family was repugnant (Myrna Loy at the end of Cheaper By the Dozen could have a career, but her childbearing days were over, and amply fulfilled!).  So Jo’s career here is much reduced, and patronisingly overseen by Professor Bhaer.  Indeed, in remaking Little Women in 1949, MGM may almost be said to be remaking Meet Me in St. Louis, its great recreation of turn-of-the-century America.  Here is the America of forty years earlier still, and here are the very same mother and father (Mary Astor and Leon Ames), at least one daughter (Margaret O’Brien), and, though no longer a member of the family, dear old grandfather (Harry Davenort).  No trolley to go clang-clang, but there is the boy next door, and you can have yourselves a merry little Christmas with Father off at the War. 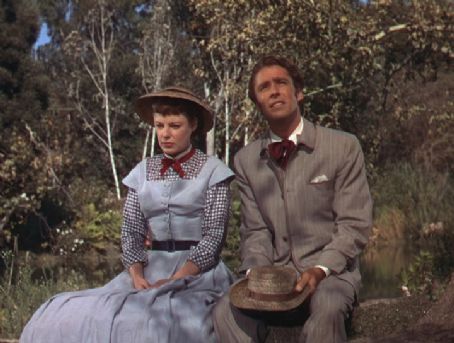 In such a romanticized version of Alcott’s novel, one need not look for the Jo we know–rather plain and ungainly, definitely rebellious, and more than a touch independent.  But while the film has been taken to task because the girls are all older than they should be, they are not unconvincingly so.  The novel is spread over several years, and ends with the three surviving sisters ready for marriage.  The film’s time scheme is shorter, so all three are justifiably nubile from the beginning.  In the book the girls are 16, 15, 13 and 12; the actresses who played them were 21, 31, 16 and 10.  A more significant change is that Beth, the doomed sister, here becomes the youngest–Margaret O’Brien is so much more pathetic; as Bosley Crowther noted, “she overacts Little Eva.”

All told, and as compared to Cukor’s careful period setting, there is not a great deal to be said for LeRoy’s girl-meets-boy romance.  Though the queenly Lucile Watson is an improvement over another mannered performance from Edna May Oliver as Aunt March, and even Peter Lawford, before he married into a different Massachusetts family, is better than Douglass Montgomery, June Allyson is not Katharine Hepburn nor was meant to be, and Rossano Brazzi (a real German wouldn’t have done in 1949) is not Paul Lukas.  But then Mervyn LeRoy is not George Cukor, either.  LeRoy had made some striking socially conscious films for Warners in the 1930s (Little Caesar, I Am a Fugitive from a Chain Gang, Gold Diggers of 1933), but his transfer to MGM in the late ’30s find him going over to sentimental romance: Waterloo Bridge, Blossoms in the Dust, Random Harvest; his Little Women represents the climax of this progression.

Cukor’s film won one Academy Award (for its script) and was nominated for two others (Best Director, Best Picture).  The only nomination for the 1949 version was for Franz Planer, the cinematograher.  Planer had photographed Letter from an Unknown Woman for Max Ophuls the year before, and in the manner of the Academy, this nomination was probably an amende for the failure to nominate him for the fluid and beautifully lighted effects of Ophuls’ film.  He went on to photograph films no less remarkable, from the expressionistic sets of Death of a Salesman to the brooding realism of The Children’s Hour (1962), his last film.