To-night’s double bill juxtaposes American films by two of the most eccentric German-speaking directors who ventured into Hollywood history, Otto Preminger and Max Ophuls.  What emerges from such a screening is an illumination of the radical differences possible in two dedicated professionals who share, as well as a common language and decade of birth, a distinguished background in acting and directing for the stage.

As the years pass on and Preminger’s work continues, Anatomy of a Murder is regarded as one of his few masterpieces, made at the peak of an almost entirely American career.  Ophuls’ The Reckless Moment (1949) is, on the other hand, the last of four films that this undoubtedly international director made during a wartime and post-war decade spent necessarily (but unfortunately) in the U.S.A.  While Preminger’s output has been both prolific and commercial enough to allow his reputation to survive some artistic disasters, Ophuls worked so rarely and with such purely aesthetic individualistic motivation that his discomfort in the Hollywood studio system was inevitable and his projects were in constant jeopardy.  While in the U.S.A., he at first could find no studio support, and later risked contributing routine genre films to a European oeuvre that had already been singled out as distinctively personal.  Only a miracle could permit Ophuls to create a classic during this period.  The miracle did occur, but its manifestation was the romantically lyrical Letter from an Unknown Woman (1948) rather than his interesting experiment with realistic film noir, The Reckless Moment. 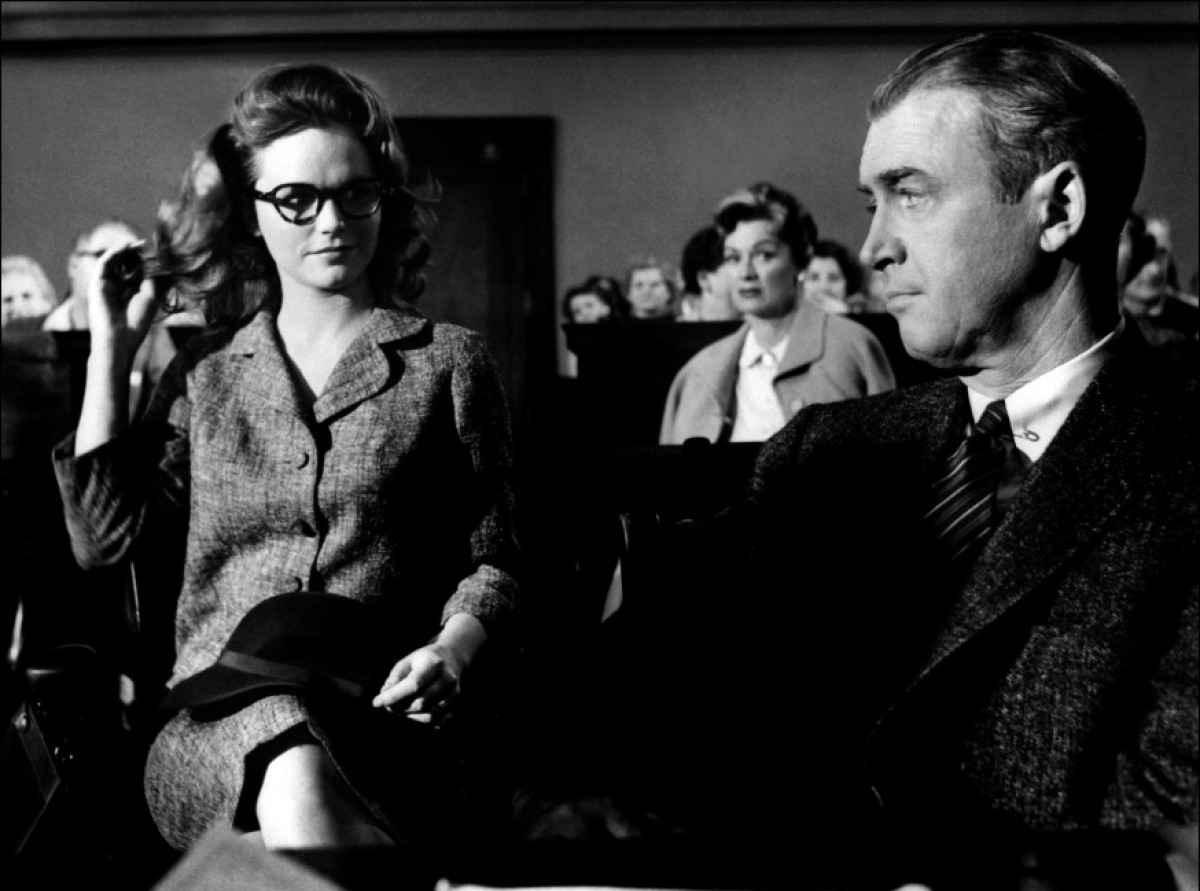 Made a year after Billy Wilder’s ambitious and entertaining Witness for the Prosecution, Anatomy of a Murder was hailed in 1959 as perhaps the best courtroom drama ever filmed.  It was primarily its authenticity that was praised, an aspect of the film that could be directly attributed to director Preminger’s eye for detail.  The story is an adaptation of a novel written by an actual lawyer, Judge John D. Voelker of the Michigan Supreme Court, who, under the name of Robert Traver, re-told the details of a murder trial in which he had himself defended the accused.

In the film (as in the novel and in real life) the defendant is any army Lieutenant who has murdered a bartender, who, he claims, had raped his wife.  The wife corroborates the rape charge, even though the Police Surgeon can point to no physical evidence.  The Lieutenant’s defence is handled by an unpretentious small-town lawyer (Voelker’s name is changed to Biegler) who discovers, among other things, that the Lieutenant has a hot jealous temper and that his wife was promiscuous….  Quite clearly, the lawyer has his work mapped out for him.  James Stewart plays the warm, perservering lawyer with a relaxed but controlled style that brought him a New York Critics’ Award and a prize at Venice.  (The film copped seven Oscar nominations, but won none in the year of Wyler’s Ben Hur.)

Out of respect for “Traver’s” material, Preminger shot the film at the actual site of the original crime in Michigan’s Nipper Peninsula.  Biegler’s cramped house is the one then occupied by Voelker.  The bullet hole in the bar came from the original fatal shooting.  The courtroom was lent by the town of Marquette.  And the Judge was played by real-life Judge Joseph N. Welch of Boston, who at 68 years of age was making his film debut about distinguishing himself in the Army-McCarthy hearings.  Welch also acted as a consultant to the production company, providing valuable details about a lawyer’s preparations for a case and about specific courtroom procedures.

Welch’s acting attracted almost as much praise as Stewart’s, yet it is still interesting to consider what the film would have been like had the Judge been played by either Spencer Tracy or Burl Ives, both of whom turned down the role.  Lana Turner was originally scheduled to play the Lieutenant’s wife, but when she refused to wear slacks designed by anyone other than Jean-Louis (and, in fact, selected by Preminger’s wife, the costume supervisor, Hope Bryce), she was discreetly ousted from the enterprise.

Eve Arden and Arthur O’Connell approached their small-town roles with their reliable screen personas of the period, and Kathryn Grant (already the second Mrs. Bing Crosby) turns in the most important performance of her short acting career.  But the most electrifying personalities are surely those of the volatile Ben Gazzara as the Lieutenant and George C. Scott as the Prosecuting Attorney.  Scott’s persona was so unknown at the time that one hapless critic went on record as suggesting that Scott’s unique dynamism must be a one-shot effort alien to the actor’s natural temperament.  Little did he know?

Anatomy of a Murder aroused the kind of scandalous controversy that Preminger was accustomed to.  After all, it was Preminger who, with The Moon is Blue (1953) and The Man with the Golden Arm (1955), had gotten into hot water with the Catholic Legion of Decency.  But The Moon is Blue had merely used the word “virgin”.  In his review of Anatomy of a Murder, the Time critic reminded his readers of the presence here of such expressions as “intercourse”, “contraceptive”, “spermatogenesis”, and “sexual climax”, concluding in Timely fashion that the film was more concerned with “anatomy” than “murder”.  But most critics agreed that Preminger handled the sexual discourse with the proper amount of professional propriety.  Six years later, though, Preminger again went to battle to defend his film against cuts made for television.

Robert Traver, incidentally, was pleased with the movie; and film historian Richard Griffith wrote a detailed book on the film from purchase of the screen rights to marketing, called Anatomy of a Motion Picture (Macmillan of Canada, 1960).

While Anatomy of a Murder seems to be conscientiously teaching a lesson on American justice, The Reckless Moment is more of a mood piece cut from the fabric of late 1940’s women’s films and film noir. 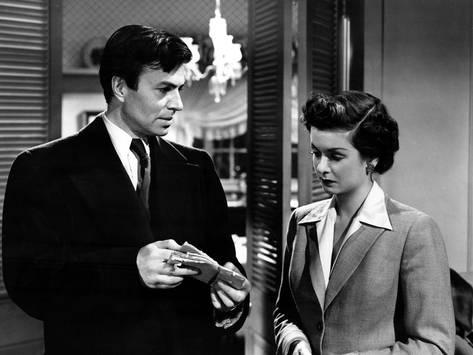 It tells the story of a Balboa, California, housewife (Joan Bennett) who becomes embroiled in a blackmail case while her husband is away on business in Germany.  The blackmailer (James Mason) knows that she has disposed of the body of a murdered man and wants $5,000 to keep his mouth shut.  The lady must take time off from Christmas shopping for her spoiled children to worry prettily over where she’ll find the cash.

Such a plot instantly calls to mind other films of the period.  The attempt to conceal a crime, which results in a blackmail attempt, recalls Fritz Lang’s Woman in the Window (1945), where Joan Bennett played the femme fatale to Edward G. Robinson’s blackmailee.  A mother’s attempt to cover up for a worthless daughter echoes Michael Curtiz’s Mildred Pierce (1945).  Thus the thematic film noir links become clearly established.

But stylistically, the film is something else.  The sets are not eerie wet streets lit by lamplight.  Bizarre camera angles are not indulged in.  Nor, in fact, is the underworld very evident.  Instead, the principal setting is the heroine’s comfortably furnished, conventionally lit home.  The tone is that of middle-class America shot on location in Balboa and Los Angeles.

It is the famous Ophuls personal style that brings the film an oneiric quality.  For, quite simply, Ophuls chooses to tell the story from the heroine’s point of view, thus permitting himself to imitate her romantic recollecting through long takes and fluid camera movement.  The setting and events thus become coloured by a woman’s special sensitivity expressed in the rhythms of Ophuls’ moving camera.  The Reckless Moment found Joan Bennett under the direction of her third distinguished European master in about as many years.  After Man Hunt and Woman in the Window, she had already added Scarlet Street and Secret Beyond the Door to her impressive Fritz Lang corpus.  Woman on the Beach was with Jean Renoir.  In retrospect, it is clear through Bennett’s costumes and hair style that The Reckless Moment served as a convenient half-way house on the road from Lang’s and Renoir’s femmes fatales to M.G.M. and respectability as Elizabeth Taylor’s mother in Father of the Bride (1950).

Ever since The Seventh Veil, James Mason had been considered one of the filmdom’s suavest hateful men.  His charming Irish manner here, though, is off-beat for the noir style, and gives him an isolated romantic air quite in keeping with Ophuls’ special veiw of the heroine’s responsiveness.  Ophuls also brings to the film the European passion for ambiguity.  For how, on the moral plane, should audiences react to the heroine’s dilemma?  Some critics have argued that she was only behaving normally, in hiding the body and yielding to blackmail.  After all, wouldn’t any stereotyped middle-class woman do the same to protect her nuclear family?  But in his 1949 New York Times review, Bosley Crowther argued that the heroine (and the film) were unprincipled, encouraging self-indulgent young people in moral irresponsibility, to which their parents could become willing accessories.

After The Reckless Moment, Ophuls went back to France planning to make Balzac’s “La Duchesse de Langeais” with James Mason and Garbo!  This would have been a return to his more comfortable Lubitsch-style material, the kind of material that he could have and should have been directing in Hollywood.  Ophuls would, of course, still have his hour.  For La Ronde (1950), Le Plaisir (1951), Madame de (1953) and Lola Montes (1955) were still waiting to be made!