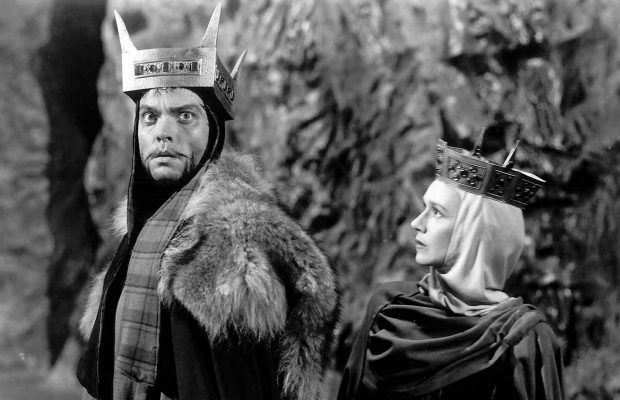 Toronto Film Society presented Macbeth (1948) on Monday, August 16, 1965 in a double bill with The Lady from Shanghai as part of the Season 17 Summer Series, Programme 4.

This may be heresy, but when Laurence Olivier recently failed to find financial backing for a film of Macbeth, I was rather glad (I’d prefer anyway that he have a go at Lear).  I’d seen so many stage and screen versions of Macbeth I felt it was due for a rest.  Although Olivier might just be the boyo to pull it off, I’ve always had the feeling that Macbeth is an almost unplayable role.  Here comes another shocker–I thought Maurice Evans (in an otherwise undistinguished and inappropriately pretty-coloured movie) made Macbeth more of a believable, erring human being and less of a posturing, glowering, declaiming figurehead than any player I’d seen try it.  Then there was the British gangster version, Joe Macbeth, not awfully good but fun in a way.  I guess the best film on the theme must be Kurosawa’s samurai-type variation, Throne of Blood–lacking Shakespeare’s text and much of his plot but a mightily impressive piece of cinema.

Orson Welles’ version first appeared heavily laced with Scottish burrs (Time magazine insisted that Lady M. cried “Oot!  Oot! dom’d spot”) which were so unenthusiastically received that the soundtrack was hastily re-dubbed in blander tones.  Reactions were still very mixed–perhaps it’s not unfair to say that most critics who didn’t like it were so incensed at the drastic cutting of the text, and its short comings as a dramatic performance of the play, that they overlooked or failed to appreciate its cinematic qualities; and that most who liked it were so excited by Welles’ manner of telling the story as a film, in a style fraught with imaginative images and camerawork, that they were ready to forgive or ignore the fact that it wasn’t very good Shakespeare.  Those who may also feel that it’s not even as good a movie as it could have been, might bear in mind that it was made very quickly on a low budget (as one of Republic’s occasional flings at “art”) and perhaps under the circumstances it’s surprising that it contains as much remarkable footage as it does. 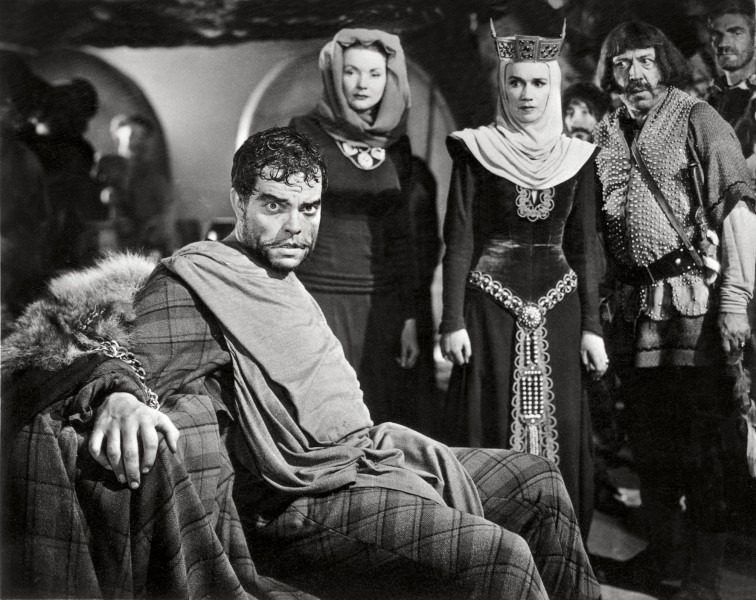 Some other opinions on Macbeth:

“Here we can see the beginnings of Welles’ filmic conceptions of Shakespeare, which he was to perfect in Othello–that is, of interpreting the Bard for the screen rather than the other way around as most movie versions have done.  He takes the theme, story and poetry and freely adapts them into motion picture terms, using the speeches so that they flow more naturally on the screen and elaborating on Shakespeare’s stage-bound directions.  There is a claustrophobic quality to the world of Welles’ Macbeth that is perfect in intention; the crimes of that dank world are exposed yet entombed.  Macbeth is a cursed man but a great character.  That is Shakespeare and that is Welles.  the performances are uneven in execution but the photography and atmosphere are almost completely successful.”  (Peter Bogdanovich)

“I never thought I was making a great film, but what might be a good film; and what, if the 23-day shooting schedule came off, might encourage others to tackle difficult subjects at greater speed.  I am not ashamed of the limitations of the picture.  Macbeth, for better or worse, is a kind of violently sketched charcoal drawing of a great play.”  (Orson Welles)