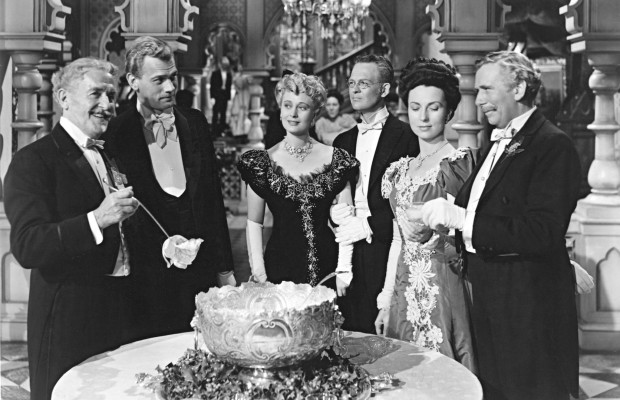 The programme will open with the playing of a recording of Orson Welles’ famous Mercury Theatre of the Air radio version of H.G. Wells’ The War of the Worlds.  *Please consult separate sheet for detailed information.* 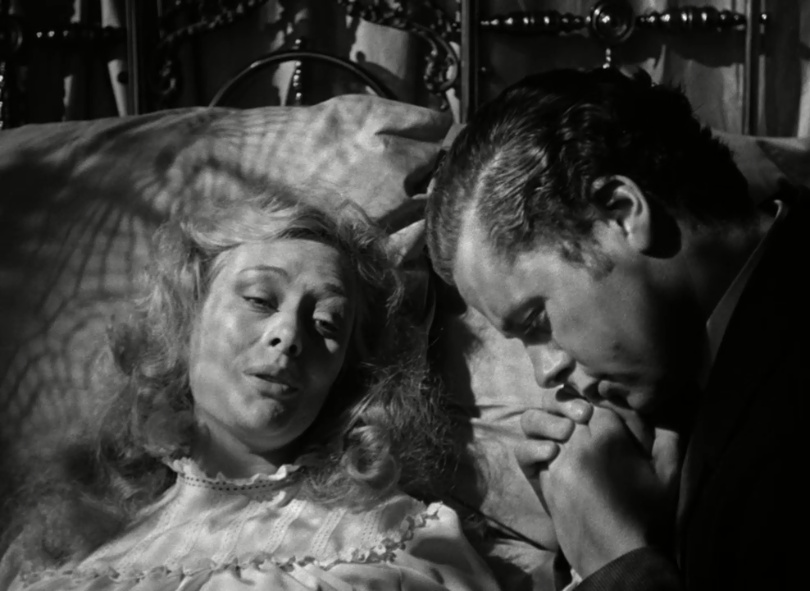 In my youth I recall reading with absorption Booth Tarkington’s Magnificent Ambersons, a novel about the decline in the fortunes of a wealthy American family and the final “comeuppance” of the spoiled son who has ruined his doting mother’s life.  It was generally considered the best work of this sometimes amiable, sometimes caustic chronicler of smalltown Americana.  There was a silent movie version of the tale called–wait for it–Pampered Youth!  Though it starred the fine actor Glenn Hunter, it was not too distinguished.  Later, I heard Orson Welles’ Mercury Theatre radio broadcast of the story; in his introduction Welles said that he felt the book had never been sufficiently appreciated as a study of the changing face of America in the late 1800’s, the changes in the town as it is gradually industrialized and how this affects the characters’ lives.  Welles’ interest in this aspect is very apparent in his film version.  Few movies have stressed background environment as prominently; in sequence after sequence, with the aid of Cortez’ admirable deep-focus camerawork, the changing town itself (including the interiors of the houses) is made as important as the doings of the people in the foreground.  As in the radio show, Welles (though he doesn’t appear in the film) reads the narration; in both word and image there is a genuine understanding of and feeling for the period, an approach critical and yet somehow nostalgic, and a real respect for Tarkington’s work.  It is unfortunate that Welles was not allowed to do the final editing on the film.  Some scenes (e.g. the ending) were shot or re-shot by others; and he had taken even more footage of the growing, ever-industrializing town, as a counterpoint to the Ambersons’ decline, that was never used in the released version.  In spite of this it remains a remarkable achievement, and for the most part its maker’s conception, style and feeling seem to have survived any mutiliation.

On its release the year after Kane, the film got laudatory critical notices but was even less successful financially than its predecessor.  Its reputation as a screen classic has stood unimpaired; if anything it seems more impressive now than on its first appearance.  Welles’ hints at an Oedipal aspect in the mother-son relationship might have startled Tarkington but seem apt to a modern audience.  More moving than ever today (because the process has gone so much farther) are Eugene’s quiet, thoughtful dinner-table remarks on what industrialization may mean.  As an inventor of “new machines” he is an apostle of progress, yet as a sensitive man he suggest rather ruefully the dehumanization that may develop.  Then too, the emotional outburst when frustrated, unhappy Aunt Fanny lets fly at her nephew is still a shattering tour-de-force.  Mention also should be made of a fine old actor Richard Bennett (father of Constance, Joan and Barbara) as Major Amberson, whose brief but telling moment of dying delirium reflects the end of an era.

“Probably the most famous radio script ever written” – Groff Conklin

At 8:00 p.m. tonight you will hear a condensed recorded version of “Invasion from Mars”, the Mercury Theatre production directed by Orson Welles and broadcast over the CBS radio network at 8:00 p.m., October 30, 1938, in which Welles plays the role of Professor Richard Pierson.

At first glance it may appear strange for a film society to present a radio broadcast, but no Orson Welles retrospective would be complete without some acknowledgement of the important part radio drama, and this drama in particular, played in his career.  In any event, radio has been called the most visual of all media–and if you want proof of this, just see what a poor thing all of George Pal’s expensive special effects are (in the movie War of the Worlds) when compared to the power of your own imagination while you listen to the descriptions of the Martians and their machines.

The script is by Howard Koch, based of course on H.G. Wells’ 1895 novel The War of the Worlds.  Orson Welles’ production has all of the brilliance which made the Mercury Theatre one of the most outstanding radio series of all time.  the use of the fake news bulletin and on-the-spot reporting format during the entire first half of the broadcast will be recognized as a forerunner of the opening “News on the March” sequence in Citizen Kane and, indeed, many of the techniques used by Welles in his radio broadcasts were adapted and used in his movie work.

It was no doubt this “news” aspect of the programme which caused the famous mass hysteria in the eastern States during the original broadcast.  Listeners who missed the announcer’s introduction (not included in the recording we are playing) believed the story was actually true, a stunning tribute to the reaslistic atmosphere of the production, and several hundred thousand people in New York and New Jersey and surrounding States attempted to flee the “disaster area”.  No piece of radio fiction before or since ever had such an amazing effect and the programme was criticized by the Chairman of the FCC. Even more serious riots were caused years later when the programme was done in Spanish in Quito, Ecuador, February 12, 1949, and in Venezuela in the ’50’s.  A scholarly study was made of the effect of this broadcast and appropriately enough it was published (in the same year that Kane appeared) by Princeton University, Professor Pierson’s erstwhile employers.

The notoriety Welles achieved through this broadcast made his name a household word in English-speaking countries and this undoubtedly led to the Hollywood offers which resulted in Kane and the other movies in this series.  There is hardly a person alive who has not heard of this broadcast, but now that 27 years have gone by there are very many who have never actually heard it and many more whose memory of it is very vague.  We therefore believe that you will find it enjoyable to discover or re-discover the power of this remarkable work of the combined imaginations of Welles, Wells and Koch.

The LP recording being played contains “built-in” scratches, “surface noise” and distortion, probably because it derives from an acetate dub on which someone preserved the broadcast.  We think you will become sufficiently engrossed in the work to ignore such momentary distractions, however.