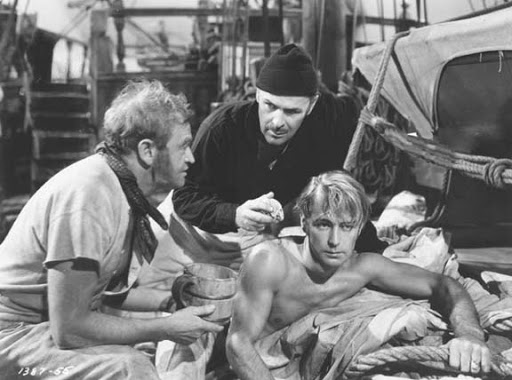 Toronto Film Society presented Two Years Before The Mast (1946) on Monday, April 6, 2009 in a double bill with The Call of the Wild as part of the Season 61 Monday Evening Film Buffs Series, Programme 7.

“I have the face of an aging choirboy and the build of an undernourished featherweight. If you can figure out my success on the screen you’re a better man than I.” – Alan Ladd

“Alan is a big star to everyone in the world except Alan. He thinks he’s in the business on a rain check.” – Sue Carol, wife and manager

“Tall, dark and handsome” was more than a just cliché in Hollywood in the 1930s; those were the essential requirements for leading men few short, blond men ever became big stars. Great pains were taken to make short leading men appear taller. And blond actors were seen as problematic. They were tricky to photograph in black and white, often looking washed out onscreen. They couldn’t resort to wearing heavy, “obvious” makeup to compensate, as blonde actresses could. When he was starting out, ALAN LADD seemed a very unlikely bet for movie stardom. He stood only 5’5″ tall and he was definitely blond. He’d slogged away for years, trying to get major parts in movies without success. But he brought a handsome face, an impressive voice and an intriguingly stoic quality to the screen, and once he got a chance to play a major role he became a big star. His tough-guy portrayals came to suit the times perfectly.

That stoic quality was the result of enduring a very difficult life. Ladd knew more pain and deprivation than most audiences could have imagined. His mother, Ina Raleigh, was an emotionally unstable English immigrant. Alan Walbridge Ladd, born in Arkansas in 1913, was her only child. The boy grew up malnourished and undersized – nicknamed “Tiny” (a name he hated). His accountant father, Alan Ladd Sr. died suddenly when his son was four. At five, Tiny set fire to their apartment playing with matches, and his mother moved them to Oklahoma City. She married a house painter when the boy was eight, and they moved to California in a futile search for prosperity. Ladd spent his childhood picking fruit, delivering papers, and sweeping stores to help support the family.

Despite his small stature, he was athletic, excelling in both track and swimming. But even there his successes led to setbacks. In 1931 he was in training for the 1932 Olympics, but an injury put an end to those plans. The acting bug bit him in high school. He became a member of a group of promising young performers enrolled in a training program at Universal Studios, but that, too, was abruptly cancelled. He and his stepfather found occasional work as grips for Warner Brothers. Ladd also had a hamburger stand called Tiny’s Patio for a time, despite his hatred of that nickname. But nothing worked out well, and he remained mired in poverty. Ladd married Marjorie “Midge” Harrold in 1936 but they couldn’t afford to live together for over a year. A bright spot was the birth of their son, Alan Ladd Jr., but the couple never had much luck. Ladd’s destitute, alcoholic mother moved in with the small family when her husband died suddenly. She committed an agonizing suicide there by eating ant poison. By 1941, the marriage was over.

Ladd worked hard at radio acting. He had a distinctive, resonant voice, and that got him freelance radio work. Talent scout and former actress Sue Carol discovered him in 1939, and she promoted him vigorously. They married in 1942. After playing a long string of bit parts (including the pipe-smoking reporter in Citizen Kane) he finally tested for This Gun For Hire (1942). His fourth-billed role as the hit man made him a very big star. This was his first teaming with the suitably small (4’11”), blonde and enigmatic Veronica Lake; together they were hot stuff. She became his co-star in an impressive seven-picture streak of hits. Paramount Pictures had him for the duration, too: he was drafted in 1943, but discharged soon after with an ulcer and double hernia.

He was a new sort of tough guy for the 1940s, seen as Paramount’s “answer” to Bogart: a man who carried on despite barely concealed pain, with a tense wariness of the world, and an intriguing air of tragedy. These qualities served him equally well whether playing a psychotic killer or a loner hero, in crime dramas, adventure stories and Westerns. He was a cooperative, hard-working actor, well-liked by those who knew him. Virginia Mayo remembered, “Alan Ladd was my favorite leading man. He was a beautiful man, charming and gentle, and I think of all my leading men he worked best with me.”

The 1940s went exceptionally well, but in the ’50s, his life began to fall apart. Money, by then, was finally no problem. Thanks to wise business investments, Ladd had become a wealthy man, with properties in Beverly Hills and Palm Springs, including the famous Alan Ladd Hardware store. But Ladd felt he was performing in unrewarding films – the exception being what many regard as his greatest role, Shane (1953). He turned to heavy drinking as the decade progressed, and it marred his looks. The end of a serious love affair with June Allyson, who he met as a co-star in 1955’s The McConnell Story, led to major depression. He badly wanted the title role in Lawrence of Arabia (1962), but lost the part to Peter O’Toole. Later that year, Ladd was found unconscious with a self-inflicted bullet wound near his heart. In January 1964 he was found dead at age 50, due to a combination of alcohol and sedatives that was ruled accidental.

In a 1961 interview Ladd had been asked, “What would you change about yourself, if you could?” He replied tersely: “Everything.” 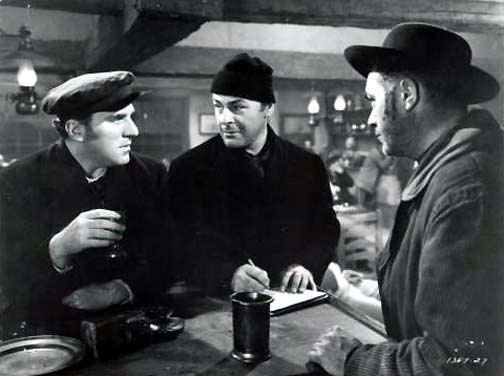 On a happier note: DARRYL HICKMAN (born 1931 in Hollywood) is still among us and leading a productive life. But that’s not to say there haven’t been plenty of perils and pitfalls to deal with along the way.

He was discovered at age 3, and from then on he worked steadily. He grew up on back lots and in sound stages, reporting for work daily and being educated in the studio schools. He was also the family’s primary breadwinner; Darryl earned a great deal more money than his father ever could during the Depression. He was never among the child stars; rather, he was that rare but infinitely useful asset, the child character actor. His skills were in steady demand, and he appeared in some of the most highly regarded films of the era: The Grapes of Wrath (1940), Men of Boys Town (1941), The Human Comedy (1942), Leave Her to Heaven (1945), Meet Me in St. Louis (1947) and The Happy Years (1950) among many others. After appearing in over 100 films, he suddenly had enough. He left movies in 1951 to join an order of Passionist monks in St. Louis. Over a year later, he realized the monastery wasn’t the place for him and attempted to pick up where he had left off in Hollywood, with limited success. He made television appearances, but became overshadowed in that medium by his kid brother, Duane Hickman, who hit it big playing Dobie Gillis (1959 – 1963). Darryl appeared on the show occasionally, playing Dobie’s brother, Davey. But TV offers eventually dried up for Darryl, and he opted to give up acting and go to work behind the scenes as a program executive (brother Duane chose the same path when his own TV and film career fizzled). Darryl also became a voice actor for Hanna-Barbera cartoons. He works today as a highly regarded acting coach. His book, The Unconscious Actor: Out of Control, In Full Command, was published in 2007.