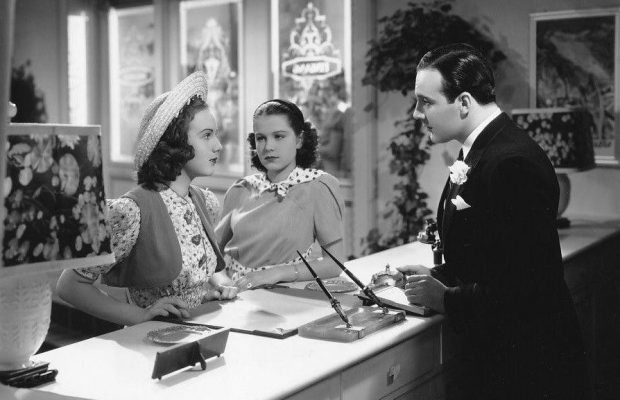 Toronto Film Society presented Mad About Music (1938) on Sunday, December 19, 1982 in a double bill with The Horse Soldiers as part of the Season 35 Sunday Afternoon Film Buffs Series “A”, Programme 4. 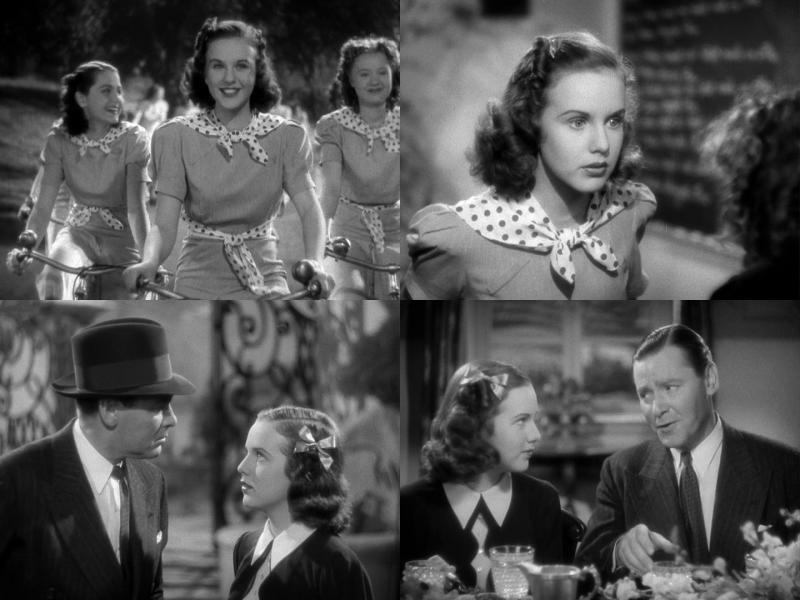 While Edna Mae (Deanna) Durbin was born on December 4, 1921, in Winnipeg, Canada, the family moved to Los Angeles about a year later.  Deanna Durbin appeared in a short film for M-G-M in 1936, Every Sunday, co-starring with Judy Garland.  Durbin was dropped by M-G-M, but picked up by Universal, and put in Three Smart Girls, where she became an immediate world-wide sensation, and one of the few teenage stars whose popularity on screen did not wane as she grew up.  Durbin made twenty-one films for Universal, and then retired in 1949, at the age of 27, to France with her husband, Charles David, who had directed her in the underrated Lady on a Train in 1945.  She has declined all interviews and steadfastly refused a return to the screen, and become, in the process, a mysterious icon rivalled only by Greta Garbo.

Mad About Music, filmed in late 1937, when Deanna Durbin was still 15, and released in early 1938, was Durbin’s third feature film for Universal, and certainly one of her very best–matched in quality perhaps only by the four Durbin features TFS has already screened–Three Smart Girls, 100 Men and a Girl, First Love and His Butler’s Sister.  The story is yet another variation of the Little-Miss-Fix-It theme Universal was fond of concocting for most of Miss Durbin’s early vehicles: this time she is a poor little rich girl, sheltered in an exclusive Swiss girls’ school by her Hollywood movie star mother.  Durbin invents an explorer father in order to not be put down by her peers, and when compelled to actually produce her father to her mates, she grabs bystander Herbert Marshall, and cons him into impersonating the imaginary figure.

If the story does not seem too promising, it nevertheless works quite entertainingly in the hands of director Norman Taurog and his cast–Durbin is solidly backed by a trio of old pros–Herbert Marshall, Arthur Treacher and William Frawley.  Mad About Music was the last of the really youthful Durbin films; in her next, That Certain Age (1938), she was permitted a boyfriend (Jackie Cooper), and she soon graduated to her first screen kiss, by Robert Stack, in First Love (1939).  But in Mad About Music, the coltish gangliness of a very young teenage girl, the spontaneous wholesomeness of innocence, were to dominate the screen for a final time. 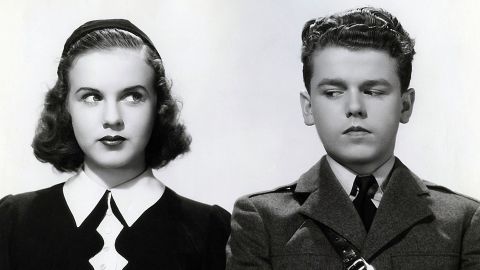 There has never been any question of Deanna Durbin’s remarkable qualities as a singer, talents she displayed in every one of her films–singing “I Love to Whistle”, “Chapel Bells”, “Serenade to the Stars” and Gounod’s “Ave Maria” in Mad About Music–and in several recordings that have never failed to be reissued to this day.  But her ease as an actress is rarely remarked upon.  Few actresses in comedies of the 1930s and 1940s could match her impeccable timing and her astonishing range of vocal inflections used in dialogue delivery; and she adds some fine facial nuances (rapid, subtle, double and triple takes) to many lines.  Her voice is soothingly relaxed in her normal register, while reaching a unique fluttery high during excitement.  One extremely rare trait she shares with the star of this afternoon’s other feature, John Wayne, is the ability to react to other actors’ lines, not just act away at other performers.  This is one of the strongest characteristics of Durbin’s acting–she instills tremendous zest and response and fun into her reactions–note the scene where Marshall comes to Durbin’s school luncheon to deny he is her father, but then sees Durbin bracing herself, with eyes closed, for the shattering of her imaginary life in front of her teacher and her classmates.  When Marshall decides to go along with the fantasy, we see Durbin change from her fear, with a pause for reaction, to a smile, then to a misty, warm look.  Durbin always became very involved with her material, and her fun transferred easily from film to audience.  The capability to change reactions quickly was quite evident even in her first feature, Three Smart Girls, when Durbin reacts with an extraordinary range at the final meeting of her parents at the close of that film.

Deanna Durbin’s success in films was instant and world-wide–a 1939 Japanese film, The Whole Family Works, contains a scene where a boy worships a publicity still of Durbin.  Her own studio, Universal, immediately groomed at least two successors/challengers, Gloria Jean and Susanna Foster, while M-G-M created the personnae of Jane Powell and Kathryn Grayson to conciliate their premature dismissal of Durbin after Every Sunday.  But all five singers/actresses were restricted by the inherent limitations of their chosen screen genre, the Miss-Fix-It romantic musical.  Still, Deanna Durbin was unique, and we are inclined to agree with Bill Everson, in his career article on Durbin in the November, 1976 Films In Review:  “Deanna’s films (and especially her earlier ones) invariably climaxed with a radiant song from the star, often with a perky pixie hat atop her tresses, followed by a full-screen closeup of a beaming smile of happiness.  That image may never come back, in contemporary movie-making, and the screen is all the poorer for it, but as long as Deanna Durbin’s films exist they’ll have the magic to generate that happiness to anyone fortunate enough to see them.”

Mad About Music was nominated for 4 Oscars: Best Original Story; Best Cinematography; Best Interior Decoration; and Best Score.  In addition, Deanna Durbin received, for this film and That Certain Age, a special Oscar, presented by Edgar Bergen and Charlie McCarthy, “for her significant contribution in bringing to the screen the spirit and personification of youth, and as a juvenile player setting a high standard of ability and achievement.”