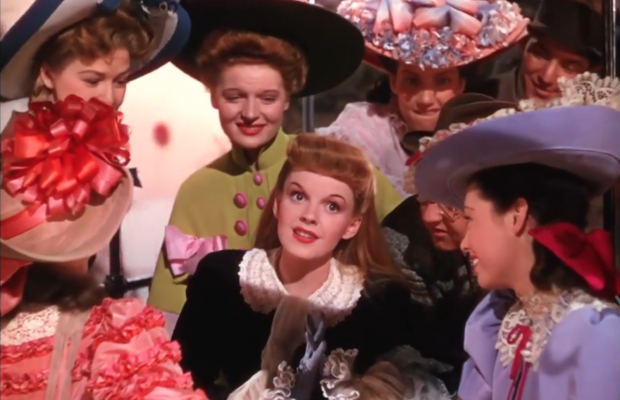 Toronto Film Society presented Meet Me In St. Louis (1933) on Sunday, December 18, 1983 in a double bill with Little Women as part of the Season 36 Sunday Afternoon Film Buffs Series “A”, Programme 4.

When Vincente Minnelli replaced George Cukor as the director of Meet Me In St. Louis, the course of history of the music film was changed.  For Meet Me In St. Louis, which was only Minnelli’s third film, became a landmark among integrated technicolor musicals and launched its director into one of the most adulated careers of directors in the musical genre.

It is hard to imagine that the film was originally conceived as a non-musical adaptation of the Sally Benson New Yorker stories about a St. Louis family in the year before the World’s Fair.  But so it was–perhaps as a result of the phenomenal Broadway success of Life With Father–until various forces (especially the producer Arthur Freed) chose to integrate song and dance as elements that spring naturally out of the action and propel the story onwards.

But there are values in Meet Me In St. Louis other than just such now-classic songs as “The Trolley Song” and “The Boy Next Door.”  As the Time critic said, the film is a musical even the deaf could enjoy.  The finished script centres around the problems the Smith family faces throughout the four seasons of 1903-04 when confronted with the unpopular possibility of moving from St. Louis to the East Coast.  Lovingly nostalgic, lavishly over-decorated, shamelessly idealized, the film presents a sinfully soft pillowful of the stuff that dreams are made of.  Of course, in production, nobody paid any attention to the fact that at the turn of the century St. Louis was considered just about the most infamous city in the USA!

Originally, the street from the Andy Hardy films was to be used for the St. Louis setting.  But as the studio’s conception of the film grew, Lemuel Ayers, fresh from designing sets for Broadway’s Oklahoma! was called in to design new ones.  Minnelli insisted he design a continuous set where the camera could move from room to room without cutting.  The result, of course, is fluid camera work, and just praise has been awarded the light extinguishing segment where the camera was orchestrated to follow the young lovers suspensefully throughout the house to record nothing more earth-shattering than a first kiss.  But while Minnelli’s camera moves, his gentle work is worlds apart from the camera gymnastics and geometrical profusions of his then contemporary at M.G.M., Busby Berkeley.

Judy Garland was the natural choice to play Esther Smith, but for a long time she refused, not wishing to return to adolescent roles.  As shooting began, she mocked the part, the film and her pain-staking director, and behaved generally unprofessionally, often being late for work on grounds of insomnia.  As work progressed, she gained respect for Minnelli, and stopped dating Tom Drake (“the boy next door.”)  When the film was completed, Minnelli and Garland moved in together, and a year later they were married.

The Smith family’s older sister Rose, as conventions and predictable as the March family’s Meg, is played by Lucille Bremer, who would be starred the next year opposite Fred Astaire in Minnelli’s Yolanda and the Thief.  The now forgotten Joan Carroll is young Agnes.  But the youngest daughter, Tootie is unforgettably (or if you prefer, unforgivably) played by little Margaret O’Brien, whose performance James Agee felt compelled to compare to some of Garbo’s!  Minnelli confesses in his memoirs to following Margaret’s mother’s example and exacting hysteria from his emotional child-star by telling her, immediately prior to shooting, that her dog was going to be kidnapped and killed!  Incidentally, her truly thrilling Hallowe’en sequence almost ended up on the cutting-room floor until some screenings proved that the film fell flat without it.

Four years later, when M.G.M. remade Little Women, Margaret O’Brien played Jean Parker’s role of the doomed Beth (with Janet Leigh, June Allyson, and Elizabeth Taylor as Meg, Jo and Amy.)  The 1903 St. Louis Street was reprogrammed as the 1860 setting for the March family.  And the Smith parents, Mary Astor and Leon Ames, reappeared as Mr. and Mrs. March.  It is an interesting foot-note that Mervyn LeRoy’s lavish, romantic and sentimentalized 1948 Little Women, which made a considerable hit with last season’s Toronto Film Society audience, bears more resemblance to Meet Me In St. Louis than to George Cukor’s earlier adaptation of the same novel.