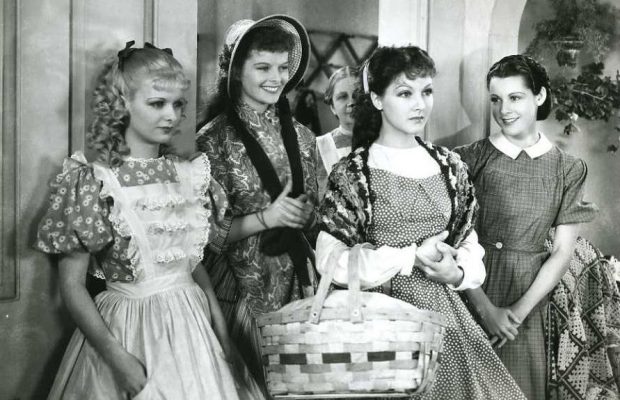 Toronto Film Society presented Little Women (1933) on Sunday, December 18, 1983 in a double bill with Meet Me In St. Louis as part of the Season 36 Sunday Afternoon Film Buffs Series “A”, Programme 4. 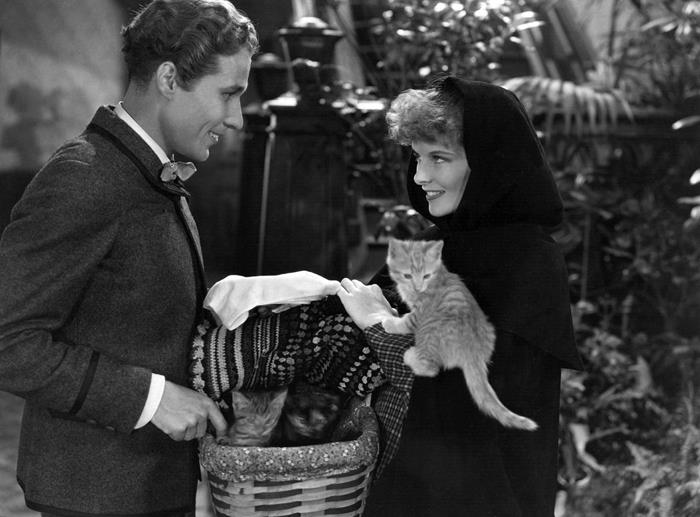 Today’s two films bear a strking resemblance to each other.  Both films deal with families where the females far outnumber the males.  Both families feture a second-eldest daughter of enormous vitality and determination played by the now legendary superstars, Katharine Hepburn and Judy Garland, when both were about 23.  Both films are atmospheric period pieces, planned vehicles suitable for George Cukor to direct (though Cukor was replaced by Vincente Minnelli on Meet Me In St. Louis when Cukor took up some war-time military duties.)  Both films are more episodic than plotted.  And both are films treasured by generations of film-goers.

Each national literature seems to possess its own special classic that has endeared itself to each new generation of young (often female) readers.  If in Canada, for instance, we have Anne of Green Gables, in the United States there is Louisa May Alcott’s Little Women.  George Cukor’s 1933 film of Little Women is actually its second filmization; a silent version having been released in 1918.  In the early 1930’s, David O. Selznick, then at R.K.O., became fascinated with Alcott’s novel of a middle-class New England family, living frugally but tastefully in the 1860’s, believing in old-fashioned virtues, dreaming attainable dreams, and being grateful for what they had.  Through Selznick’s efforts, the husband and wife team of Victor Heerman and Sarah Y. Mason took over an existing unsatisfactory screen treatment of one of their favourite novels and acted out all the parts (Heerman played all four daughters!) while writing their fresh and largely unsentimental script.

It is very clear that the film was a labour of love for all concerned.  Cukor, who hadn’t read the novel when Selznick asked him to direct, was surprised to find the book so unsaccharine, and delighted in its faithful delineation of Victorian America.  Gavin Lambert, in fact, finds Cukor’s sense of personal discovery reflected in the perpetual freshness of the film.  And, according to Cukor and almost everyone else, Katharine Hepburn, a New England girl herself, was born to play the tomboyish Jo March.  Cukor claims she felt the role intensely, and she has since called it her favourite part.

Second billing went to the blonde Joan Bennett, who plays the March family’s youngest daughter, the flirtatious, pretentious, selfish and silly Amy.  Cukor had met Bennett at a party where she was somewhat tipsy and had chosen her on the spot.  He had, of course, not foreseen the problem that might occur when Bennett’s pregnancy during production increasingly imperilled the credibility of Amy’s slim girlishness.  Cukor was personally disappointed only with Spring Gyington, who, as Marmee, is hardly Alcott’s “tall stately lady.”  More recent criticism has also pinpointed Max Steiner’s score as being too insistent.  A not unexpected flaw when one considers that Steiner’s dynamic soundtrack for King Kong in the same year was being hailed as a musical breakthrough in film scoring!

The authenticity of the film’s sets has often been praised.  The two homes of the Marches and the Lawrences were reproduced with accurate detailed tastefulness.  Parts of the costumes were interchanged among the actresses in different scenes to suggest their sensible way of life (particularly appealing to Depression audiences) and real snow was produced for shooting on the R.K.O. ranch.

Cukor has said of Little Women (made in a rich period of his career immediately after Dinner at Eight and before David Copperfield) that he consciously avoided creating “big scenes”, so that nothing would call attention to itself.  Furthermore, it was he who insisted that the Heermans’ version of the script, in which Jo’s novel would be a smashing success, be modified to represent a less idealized view of life’s rewards.

Little Women was nominated for three Academy Awards: Best Picture, Best Director and Best Screenplay Adaptation.  The Heermans won in that last category; Katharine Hepburn, who has been so rightly called “the spine” of the film, was named Best Actress of 1934 at the Cannes International Film Festival.