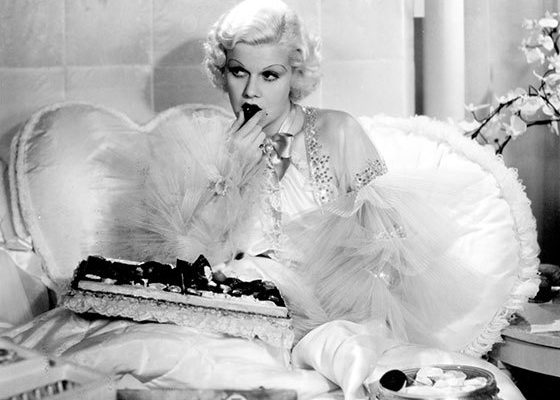 Toronto Film Society presented Dinner at Eight (1933) on Sunday, November 27, 1983 in a double bill with Lady of Burlesque as part of the Season 36 Sunday Afternoon Film Buffs Series “A”, Programme 3. 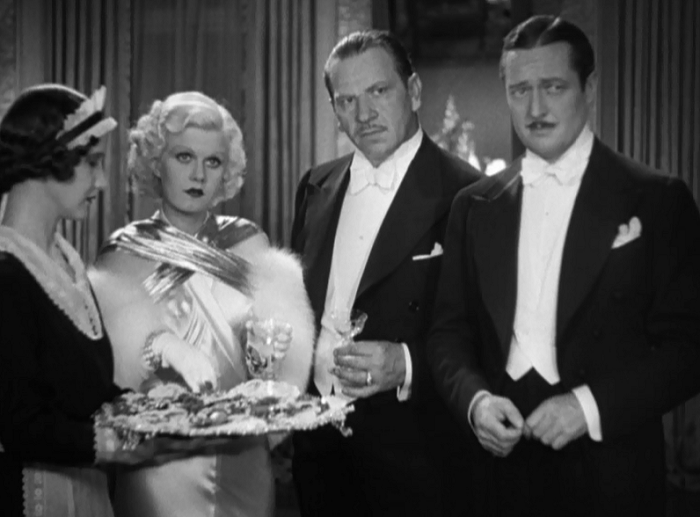 When M-G-M shot Grand Hotel (1932), the gathering of a superstar cast was thought an audacious challenge.  It proved both a critical and a financial success.  The studio, thrlled with the Oscar winner’s box-office record, sought another vehicle in which to package as may stars as possible.  The studio located the proper showpiece playing at Broadway’s Music Box Theatre–George S. Kaufman’s and Edna Ferber’s comedy Dinner at Eight.

With Frances Marion, Herman J. Mankiewicz, and Donald Ogden Stewart making scenario adjustments (including the now classic closing exchange), Dinner at Eight started production under the aegis of Mayer’s fiercely ambitious son-in-law David O. Seznick (imported from his former base at RKO) and a youngish director George Cukor.  Production commenced on March 16, 1933, with a gaggle of the studio’s most lustrous stars in roles which might have been conceived just for them.  Mayer’s “pet” Marie Dressler as former great beauty Carlotta Vance; John Barrymore as the strutting, eye-rolling, alcoholic ex-idol Larry Renault; Wallace Beery as bombastic, shady tycoon Dan Packard; Jean Harlow as his venomous-tongued, up-from-the-gutter spouse Kitty; Lionel Barrymore as a dying (again!) businessman; Billie Burke as an especially fluttery socialite; Lee Tracy as a fast-talking show business agent; and in less sizable but nicely spotted assignments, Madge Evens, Jean Hersholt, Karen Morley, Phillips Holmes and Edmund Lowe.  Despite the seeming perfection of casting Mayer did not like Jean Harlow and thought she would suffer in comparison to Dressler, the Barrymores, et al.  Director Cukor felt differently: “I’d seen her in Public Enemy and Hell’s Angels, where she was so bad and self-concious it was comic.  She got big laughs when she didn’t want them.  Then I saw Red Dust–and there she was, suddenly marvelous comedy.  A tough girl, yet very feminine, like Mae West.  They both wise-crack, but they both have something vulnerable, and it makes them attractive.  Harlow was very soft about her toughness.”

If Grand Hotel had a bumpy creation, Dinner at Eight was the perfect example of on set tranquility, coasting to a finish on April 17 (one month in the making).  While Cukor was impressed by the cooperation of all the name performers, none pleased him as much as John Barrymore (with whom Cukor had worked at RKO the year previous in A Bill of Divorcement).  Recalled Cukor on the NET 1970s teleseries “The Men Who Made the Movies”: “In Dinner at Eight he played a second-rate cheapish actor, which God knows he wasn’t.  And he did it with enormous wit and subtly…I remember the very touching end…I said, ‘I think he (Renault) can’t even die satisfactorily…something awkward and awful should happen to him, even though he was imagining this great death scene where he was going to kill himself….I think it would be very interesting if he did this very ugly, middle-aged sprawl,’ and he did this so wonderfully.  And then he pulled himself together and died showing his profile.  Jack was a man with no vanity and enormous knowledge and humor as all the Barrymores had.  They were all fascinating creatures.  They were really magical people.” 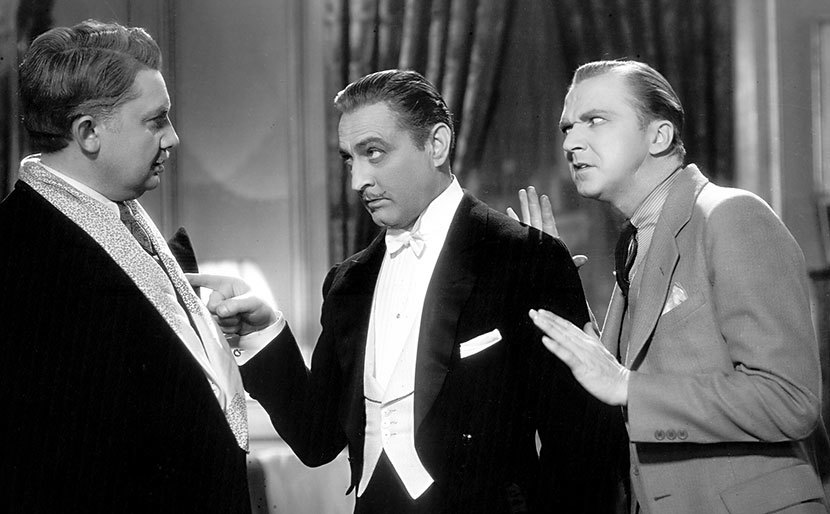 When released in August 1933, Dinner at Eight was, in the words of Bland Johaneson (New York Daily Mirror), “wholly splendid.”  Cukor had injected pace into the proceedings without succumbing to temptations to over-cinematize the stage story.  Each star enjoyed at least one special vignette that lingered after the viewing…

However, special salutes must go first of all to John Barrymore for his superb portrayal of the tragic Renault, played almost in black-comedy style as he misquotes Ibsen, soliloquizes on his ex-wives with punctuations of muggings and raspberries.  He also creates one of the screen’s most vivid–and pathetic–suicides.  Some critics insisted that Barrymore was merely playing himself–or, rather, playing the drunken man he would later become–but this is not so.  The real-life inebriate was a foul, frightening self-waste who urinated in restaurant lobbies and appeared to glorify his own ruin.  But in Dinner at Eight Barrymore is in complete control of his deft characterization, which he patterned after his father-in-law, actor Maurice Costello; his brother-in-law, actor Lowell Sherman; and, last, himself.

The other huzzahs go to Beery and, even more so, to Harlow.  Whenever the feature is revived, the audience response, as it was in 1933, favors most strongly the Olympian insult slaughters that erupt between the two performers.  The gruff, notoriously unlikable Beery and the breezy, happy Harlow had no love for one another in actual life, and Cukor allowed them free rein to spew their harangues.