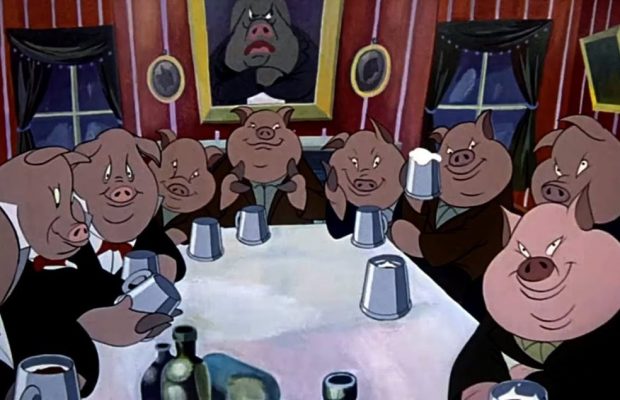 Toronto Film Society presented Animal Farm (1954) on Sunday, January 8, 1984 in a double bill with Six of a Kind as part of the Season 36 Sunday Afternoon Film Buffs Series “A”, Programme 5.

WE ARE UNABLE TO SCREEN 1984 today, and in its place we are showing Animal Farm, also written by George Orwell. 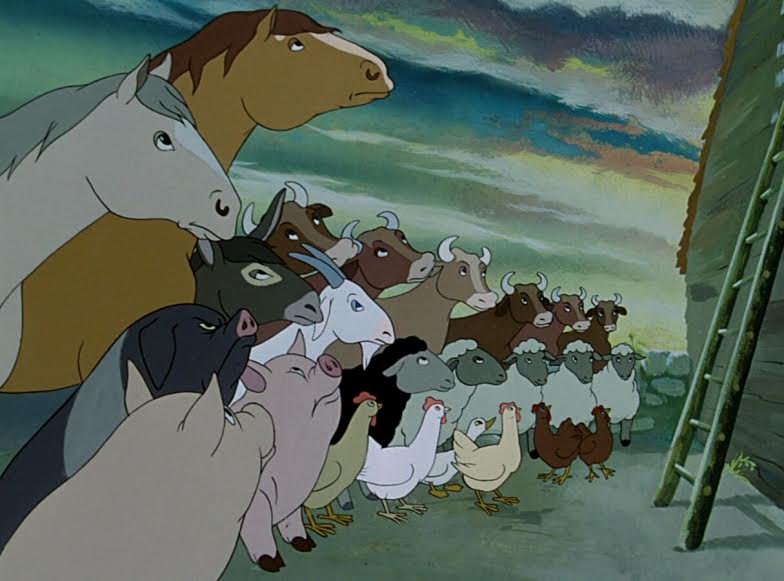 George Orwell’s Animal Farm is an angry satire on Soviet Communism, cast in the form of a simple and moving fable about animals.  Driven past endurance, the animals on a mismanaged farm rebel and create an equitable society, governed by the pigs who are the cleverest among them.  But the pigs gradually betray all its principles and turn it into a dictatorship, themselves becoming indistinguishable from the human tyrants the pigs had overthrown.  The John Halas-Joy Betchelor Animal Farm (Louis de Rochemon – A.B. Pathe) is very different.  With emphasis shifted from the particular to the general, the satire here is on a dictatorship which sometimes resembles Fascism as much as Communism, and the fable is modified accordingly.  The pig dictator’s cunning diplomacy with human neighbours is omitted, as are the tame raven’s homilies about Sugarcandy Mountain.  That the conclusion should be radically altered is inevitable.  Orwell ends with the exhausted animals, watching the pigs feasting with their human associates, looking ‘from man to pig, and from pig to man again; but already it was impossible to say which was which’.  Hopeless, the animals did nothing.  In this animated cartoon they notice the resemblance during a congress of pigs from far and wide on their farm and, supported by animals from other famrs, they revolt.

In spite of all these changes, the fundamental meaning of the book and film is the same.  In the film, the poignancy of the two heroic characters has been enhanced; the simple-minded carthorse, who labours prodigiously and loyally for the good of all, and his devoted friend the donkey, the only one never deceived by the pigs, are very appealing creations.  And the scene of the donkey trying vainly to save the horse from the knacker makes a strong emotional impact.  Most critics, whatever the politics of their papers, have referred to the book’s ending as ‘sad’ and to the film’s as ‘happy’.  Now, in either case the political implications would not have been so widely accepted if the heroic figures had not succeeded in arousing personal sympathy.  The difference between film and book is, finally, in their emphases.  In both cases the pigs betray their ideals, but where Orwell’s conclusion is that Communism = Capitalism (the hopeless animals do nothing about their plight), the film shows that with intervention from outside this same conclusion may be averted (the animals, with animals from other farms, revolt).

Animal Farm is the first serious and full-length British cartoon, but its interest goes beyond that.  Admittedly the style of drawing is not new; in keeping with Orwell’s realism it is representational and therefore reminiscent of Disney, but it has some exciting pictorial effects and the editing is brilliant.  Some sequences, like the rebellion and the invasion, are remarkable for the dynamic movement achieved by quick cutting from one striking image to another; and several of the longer scenes, especially those involving the horse and the donkey, are also notable for the animation–which, though technically imperfect, is full of expression and individuality.

Only the pigs, destined to be humanised, talk.  Belonging to the outside world, the human beings are thost strongly caricatured.  The casting, which is Orwell’s, gives the animals symbolic roles, only some of which correspond to genuine animal characteristics, and others conform to the traditional mythology which has penetrated into every language; the ‘brainless’ hens, the ‘silly’ goose and the ‘sheepish’ sheep are the ones who needlessly confuse treason.  But, except for the martial bearing of the pigs, all the animals movements are natural and well studied, and many of them, which is the film’s great merit, are impressive as symbolic figures.