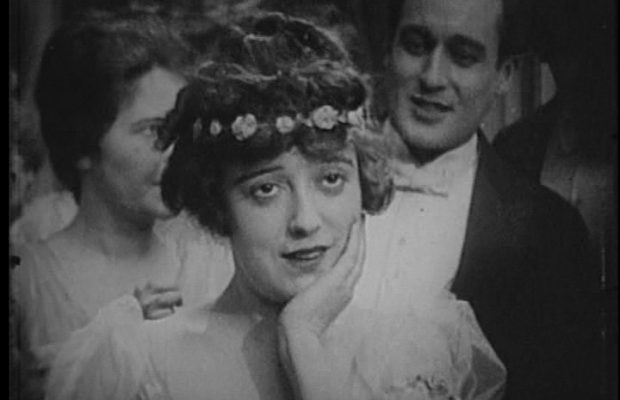 IN THE LOBBY from 7.40 to 8.10 p.m. film (or filmstrips)
will be screened – possibly Goodness Gracious (1914), with
Clara Kimball Young and Sidney Drew and Stenographer
Wanted (1919), with Flora Finch and John Bunny which
cannot be included in regular programme.

Chaplin demonstrates his genius for comic invention by extracting comedy out of everything about him.  One of the most famous of the Mutuals.

This visual interpretation of Moussorgsky’s music is a remarkable example of the independent artist’s work in the field of animation.  Alexeieff employed a technique which was unique in the history of the drawn film.  About 30,000 needles were inserted through a thick rubber sheet so that their points projected through the smooth surface, which was then lit by a grazing light; the extent to which the needle-points projected above the surface controlled the tones of the picture.  By manipulating groups of needles and single ones by means of tweezers, pictures could be built up which–when altered progressively from image to image–gave the effect of an animated mezzotint.

NOTE:  Duplication has caused a loss in the subtle range of tones contained in the original print.  This, unfortunately, is the fate of many films.

DIRECTED by:  Richard Jones
for the Mack Sennett Studios
with Mabel Normand

The cinema’s first complete comedy world was created by a young, prematurely grey Canadian.  Mack Sennett’s rise was among the most meteoric in the film history.  His family, whose name was Sinnot, owned the Central Hotel in Richmond Junction, P.Q.  Mack and his two brothers went to school at Point aux Trembles in Montreal where they spoke French with an Irish accent.  Eventually the family moved to East Berlin, Conn., where Mack was a boilermaker and studied singing.  His desires for a career in the theatre led him first to a job in a burlesque show where he played the hind legs of a horse, and then to work in two-reel novelties directed by D.W. Griffith.  In no time at all he was a director.  Then he persuaded two bookmakers to whom he was already in debt to put up $2,500 and launch him as a producer of short comedies.  All told Sennett produced more than 1,000 silents and over 300 talking pictures.

Sennett took his comics out of music halls, burlesque, vaudeville, circus and limbo.  Through them, he developed to its final form–slapstick–which, under him was great not merely on technical grounds, but because it was inspired by a profound, wry knowledge of human nature and a most delicate observation of life.  Had he done nothing else, Sennett would be remembered for giving a start to three comedians who began to apply their sharp individual talents to the newborn language:  Charles Chaplin, Buster Keaton and Harry Langdon.

Sennett never married.  The love of his life was Mabel Normand, a boyhood sweetheart.  She became one of his greatest stars–still remembered for Mickey–as well as one of the most tragic figures of the screen.  She figured–though only remotely–in the sensational shooting of Director William Desmond Taylor, and various narrow-minded pressure groups, already shocked by the Fatty Arbuckle scandal of the previous year, demanded Mabel be banned from films.  Later she contracted tuberculosis.  This forced Sennett to withdraw from release a picture starring Mabel and entitled Molly-O at a reported personal loss of more than $500,000.  It was the first of a series of financial reverses which greatly depleted his fortune and sent him into retirement.

Mabel Normand at 14 could swim, ride, and played only with boys–an arrant tomboy and jokester.  At 15 Mable was artists’ model for Charles Dana Gibson, James Montgomery Flagg and others.  Her career in motion pictures began at Vitagraph and then Biograph, where she acted for D.W. Griffith at $25.00 a week.  Mack Sennett hired her when she was 16 and she acted in many of the short Keystone comedies.  Chaplin started his career as a stooge to Mabel.

Mickey was a super-production of its time and a great success at the box-office.  It made the reputation of Mabel Normand as, second only to Chaplin, the most popular comedy star of the period.  Bardèche and Brasillach describe the film as “a delightful comedy–a preposterous but witty satire on high society, and one of the first really important American comedies.”  The Museum of Modern Art tells us that this comedy has only touches of burlesque and slapstick.

Mickey was begun in 1916, and was not finished until the next year.  An epidemic of misfortunes beset it.  Illness, accident, story changes and all the other trials known to motion-picture production hounded this work.  Then, after it was completed, the exhibitors refused to buy it, insisting it was too cerebral.  The print lay on the shelf for almost a year and was finally shown at a small Long Island Theatre as a substitute to a film that did not arrive.  Its success was immediate and for four years Mickey was shown all over the world.  It became known as “the mortgage lifter.”  (Gene Fowler)

MGM’s Julius Caesar opening soon at the Towne Cinema is a faithful, tasteful and stirring screen version of Shakespeare’s great melodrama that should on no account be missed.  Eschewing Technicolor and senseless spectacle, producer John Houseman and director Joseph Mankiewicz have hewed admirable to the dramatic story line and the projection of the characters–yet, while doing nothing that would detract from these or from the sweep of the poetry, they have employed the camera most effectively in the use of closeups and other visual devices where appropriate.  From a text generally complete and meaningful for our time only the scene involving the mob treatment of Cinna the Poet is inexplicably missing.  Otherwise it is difficult to find fault.  Of the actors, John Gielgud, James Mason and Louis Calhern are, I think, magnificent; and while Marlon Brando obviously lacks the Shakespearian training of his colleagues, his Marc Antony has an emotional force and conviction that carries it through.

The latest Renato Castellani film to show locally, Mio Figlio Proffesore (My Son the Professor) is more subdued in tone than this director’s ebullient, swift-moving Under the Sun of Tome and Two Cents Worth of Hope–a bit on the sentimental side, in fact, but done with taste and sensitivity and finely played by Aldo Fabrizi.

Last Season members were invited to send in their lists of
10 Best and/or 10 Favorite Films.  After the results were
published, further lists arrived, the results of which are
now given.  Again – all members are invited to participate
in this quite taxing pastime.

George Patterson’s 12 Favorites
“chosen mainly as ones that have
retained – or increased – their
original impact on me over years
of repeated viewings..  Too tough
a task to select the “10 best”
films I have ever seen.”

Oscar Burritt’s 14 Favorites and 7 Best
“The basis of selection is purely that
of memories I have of various films; if
I were to re-view them now (1952), I
might feel entirely different.”

Wm. McLean’s Favorites:  2 lists
“Apart from the first in each list,
the order is at random.”