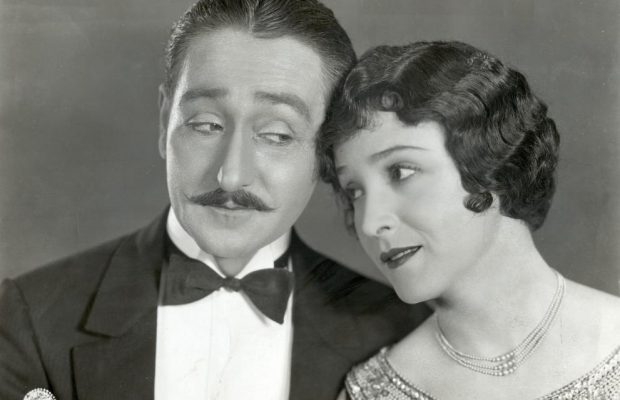 Toronto Film Society presented Are Parents People? (1925) on Monday, April 14, 1958 in a double bill with The Marriage Circle as part of the Season 10 Monday Evening Silent Film Series, Programme 6.

A Programme of American Comedy

Big Moments From Little Pictures (USA 192-).  In this famous short film, Will Rogers lampoons such popular movie hits of the day as Robin Hood with Fairbanks, Blood and Sand with Valentino, Over the Hill, and Sennett’s Keystone Cop comedies with Ford Sterling.

W.K. Everson of Theodore Huff Memorial Film Society, N.Y., says: Are Parents People? is a typical example of the light, charming social comedy that has completely disappeared from the screen today.  Admittedly no more than pleasant trivia, it sparkles from first scene to last, wagging an admonishing yet friendly finger at the audience, sending it home with an understanding pat on the back.  It marked Mal S. Clair’s debut at Paramount, following several years of directing Buster Keaton comedies, Rin-Tin-Tin adventurs, and miscellaneous melodramas.  It established the 28-year-old director instantly and let to a wonderful series of frothy comedies–The Grand Duchess and the Waiter, Gentlemen Prefer Blondes, A Woman of the World, The Show-Off, etc.  In the talkie era, he did not fare so well, and died in 1952.  One of his greatest talents was an ability to build minor incidents into fine comedy sequences.  Th episode in Are Parents People? with Andre de Beranger as a satirized Barrymore is typical.  His intelligent pacing and cutting, and sparse use of titles, help to tell the story visually so that one hardly notices the rather static camerawork.  (A nice little sequence shows Betty Bronson passing through several stages of indecision merely by a close-up of her ankles in differing attitudes; a similar episode conveys disdain and indifference by close-ups, from the back, of Betty’s shrugging shoulders.)  Notwithstanding the smoothness of the direction, the slick photography, and the assured playing of Menjou and Vidor, a good deal of the film’s engaging charm is due to the delightful performance of Miss Bronson.  A unique product of the period, she was in mid-teens when this film was made–her first appearance after he great success in Peter Pan.  Her seemingly perpetual gaiety attaches itself to every scene in which she appears, yet with the slightest alteration of a facial expression she switches effortlessly to a mood of abject pathos.  This characteristic was at its most expressive in her second Barrie film, A Kiss for Cinderella.  With Bronson, St. Clair’s slick yet sensitive direction and a pleasingly nostalgic mid-20’s plot, Are Parents People? is a thorough delight in every department.”

N.B. – Our version is probably slightly shorter than the original.