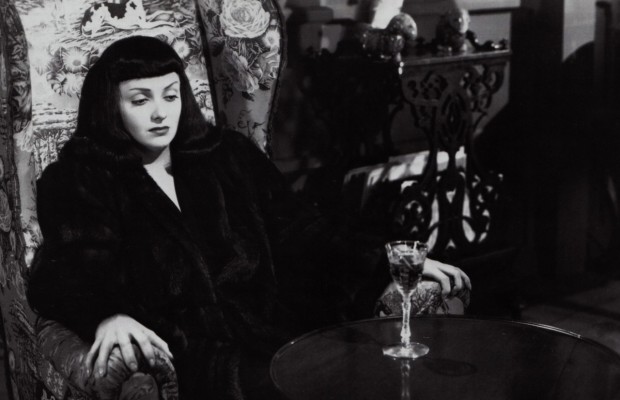 Toronto Film Society presented The Seventh Victim (1943) on Monday, February 24 1975 in a double bill with Death Takes a Holiday as part of the Season 27 Monday Evening Film Buff Series, Programme 4.

Producer Val Lewton left his unique mark on the series of imaginative and intelligent horror-fantasy films that he made for RKO in the 1940s.  Cat People ’42, The Leopard Man ’43, The Seventh Victim ’43, I Walked with a Zombie ’43, Isle of the Dead ’45, Bedlam ’46–these films (along with several others) form a genre of their own.  Poetic, evocative, and yet genuinely horrific, they set a standard for all future horror films made in Europe and Hollywood.  These films are also distinctive in being more the particular vision of their producer rather than their directors. Born in 1904, Val Lewton was a writer, story editor and novelist before becoming a producer.  Although he was assigned low-budget ‘B’ films, Lewton collaborated with the best possible writers (DeWitt Bodeen), directors (Jacques Tourneur, Robert Wise, Mark Robson), cameramen (Nicholas Musuraca).  He also assembled a company of players (among them Tom Conway, Kent Smith, Jean Brooks) and used their talents again and again,  His films follow a simple formula.  They rely on suggestion, understatement and obliquity to hint at the macabre, often resulting in truly frightening excursions into the supernatural.

The Seventh Victim is Lewton’s most personal work and the screenplay draws upon some of his own experiences in New York.  Here, Lewton gave Mark Robson his first chance to direct and Kim Hunter her first screen role.  The story concerns an orphaned girl, Mary, who goes to New York to find her missing sister.  Her search leads her to murder and the discovery that her sister is a member, and also the intended victim of a cult of devil-worshippers.  The film’s eerie mood eloquently captures the nocturnal menace of a large city, and its implicit threat of hidden evil.  There is an undercurrent of human misery to the film.  Each of the diverse characters Mary meets is trapped in a joyless world.  The film imparts a haunting vision of isolation and despair–an awareness of death in the midst of life.

Mark Robson was born in Montreal in 1913.  Before The Seventh Victim he worked as a film cutter for Orson Welles on Citizen Kane and The Magnificent Ambersons.  After directing several films for Lewton, he directed Champion and Home of the Brave for Stanley Kramer.  His latest film is Earthquake and he admits that, although he originally wanted to make films with social content, he now only wants to entertain.  Yet he cannot be dismissed as a ‘commercial’ director.  His films of Peyton Place and Valley of the Dolls were far superior to the novels from which they were derived, and illustrate Robson’s talent as a director.

All members of the Film Buff Series are invited, as guests of TFS, to the March 17, 1975, special Silent Series screening of King Vidor’s La Boheme (1926), with Lillian Gish and John Gilbert; piano accompaniment by Charles Hofman.  At O.I.S.E. auditorium, 8:15 pm.