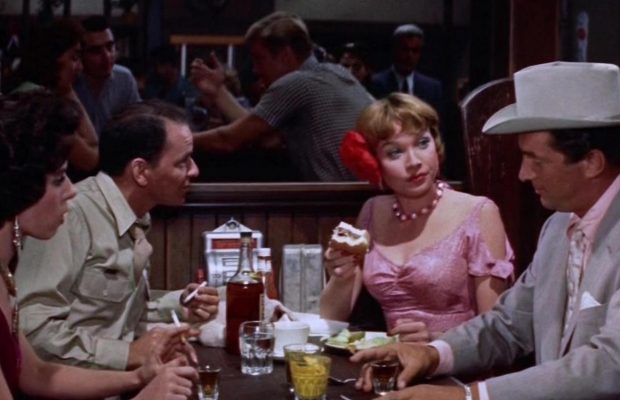 Toronto Film Society presented Some Came Running (1958) on Sunday, November 25, 1984 in a double bill with The Preview Murder Mystery as part of the Season 37 Sunday Afternoon Film Buffs Series “B”, Programme 4.

The title, Some Came Running, taken from St. Mark, refers to those who have come running to find the meaning of life, but are prevented from finding it by their obsession with materialism.  James Jones’ novel was meant to convey “the separation between human beings–the fact that no two people ever totally get together: that everyone wants to be loved more than they want to love.”  Following the tremendous success of the film adaptation of Jones’ first novel, From Here to Eternity (1953, directed by Fred Zinnemann, winning Academy Awards for Best Picture, Best Director, Best Screenplay), Sol C. Siegel chose to make the film of Some Came Running his first personal production since his takeover at Metro.  Vincente Minnelli, intrigued by the characters and their development throughout the long and rambling novel, saw the filmic possibilities in Some Came Running of exploring the frustrated, anguished elements of the human condition.

Frequently compared to the soap-opera film of Grace Metalious’ novel Peyton Place (1957) in terms of its treatment of small-town sleazy life, Some Came Running was seen by Minnelli as the story of “small-town honky tonks, of cheap low lifes not without charm”  Critics generally view Minnelli’s film Undercurrent (1946) as his only example of “film noir”, and not successful at that.  However, a case could be made for the inclusion of this film in that category, especially in view of Minnelli’s own perspective of how he wanted to treat the basic theme: “The audience had to be knocked out by their vulgarity.  I decided to use the inside of a jukebox as my inspiration for the setting…garishly lit in primary colors.” (I Remember It Well)  In Some Came Running, the famous carnival scene certainly qualifies as a lesson in lighting techniques associated with film noir, with its lurid lighting and crimson colours, its twirling carousel and Ferris wheel lights.  Minnelli’s experimental filming and the signature “bizarre” sequences were considered by him to be a totally photographic way to reveal the characters’ subconscious feelings.  “If you get involved and if the picture haunts you a little bit afterwards, then you have created a little magic.” 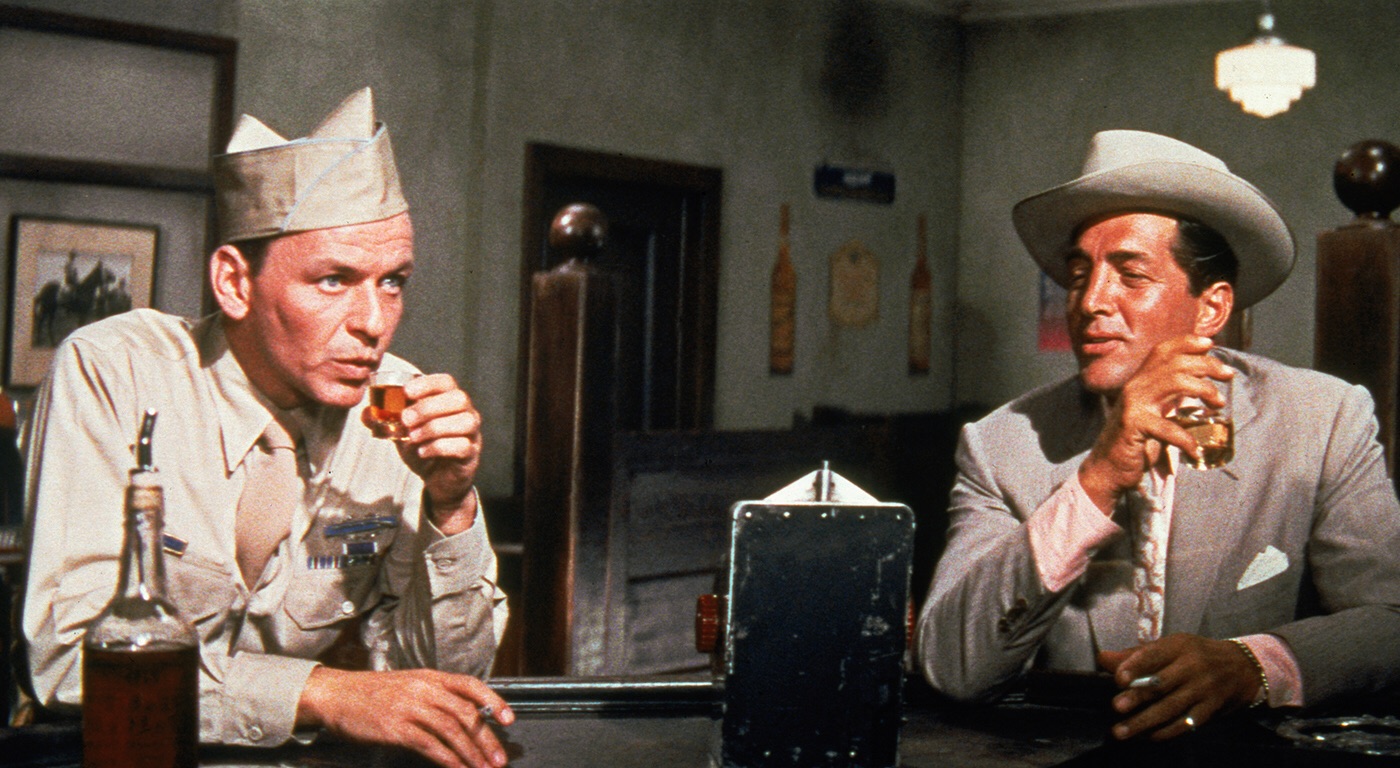 The excellent cast is led by Frank Sinatra, whose career was rescued by the smash hit From Here to Eternity (for which he won Best Supporting Actor).  In this second film from a Jones novel, Sinatra was generally praised for his role as the sensitive, embittered novelist.  Bosley Crowther (N.Y. Times) found Sinatra “downright fascinating–what the youngsters would call “cool”…beautifully casual with a bottle, bullseye sharp with a gag and shockingly frank and impertinent in making passes at dames.”  Given that Sinatra had just taken over as head of the Rat Pack in Hollywood social circles, his character in the film seemed, in part, to be a case of perfect type casting.  However, it was Sinatra’s suggestion to build up Shirley MacLaine’s role so that her impact as the slovenly, whorish Ginny became considerable and she dominated the picture–her performance gaining her a nomination as Best Actress.  The triangular relationship between the Sinatra-MacLaine-Martin characters portrays the disillusioned, cinical post-war generation which exemplified the post-World War II Beat Generation.

Martha Hyer’s role as the “confused and frigid” schoolteacher provides the necessary foil to the MacLaine character and sets up the traditional Minnelli situation of the virgin vs. the whore, the calling on the male hero to choose between them.  The seduction scene, filmed in semi-darkness with a pinpoint of light catching Hyer’s eye, was staged like a dance sequence, building hesitantly to the eventual surrender.  Hyer’s performance is controlled and sensitive, for which she was nominated for Best Supporting Actress.

The critical reaction to Some Came Running was, predictably, mixed.  Time saw Minnelli’s talents “dissolving in the general mess of the story like sunlight in a slag heap”, and Peter G. Baker (Film and Filming) declared, “Every great director has his name on at least one “stinker”.  This is Minnelli’s.”  However, the film was also seen as “an unforgettable vignette of American life” (Life) and “one of the most exciting pictures of the season” (Variety).  But in a year which saw one of the most popular films of all time (Minnelli won the Oscar for Best Director for Gigi in 1958) it is understandable that this was ignored.