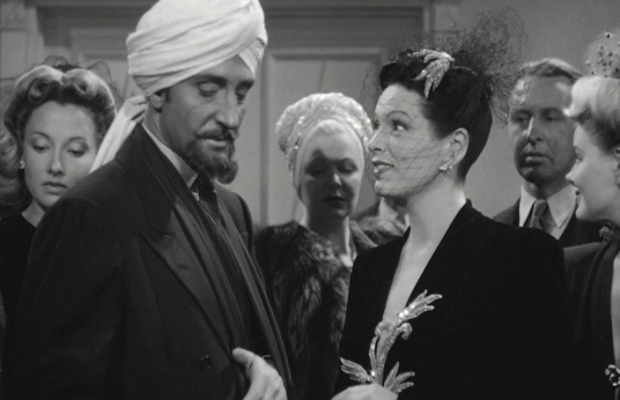 Toronto Film Society presented The Spider Woman (1944) on Sunday, January 15, 2017 in a double bill with Above Suspicion as part of the Season 69 Sunday Afternoon Film Buff Series, Programme 4.

There have been over 100 actors who portrayed the world’s most famous detective, Sir Conan Doyle’s Sherlock Holmes.  Starting as early as 1905 in an Hungarian film, this master detective was played by some of our best-known actors.   Mack Sennett in 1911, John Barrymore in 1922, Raymond Massey in 1931, Clive Brook in 1929, 1930 and 1932, Reginald Owen in 1933, Peter Cushing in 1959, George C. Scott in 1971, Roger Moore in 1976 (shown by TFS this past summer), Christopher Plummer in 1979, Michael Caine in 1988 and Robert Downey Jr. in 2009 and 2011 just to name some of the ones on celluloid alone, never mind on radio, stage and TV.  But the quintessential Holmes, the one that I believe comes to everyone’s mind when they imagine him, or certainly for a certain generation, is Basil Rathbone.

And why is this?  This generation of people have read the short stories and perhaps it’s because Doyle’s description comes closest to Rathbone’s physicality.  But it’s possibly more than that—it must be Rathbone’s droll, brilliant but almost unemotional-like delivery.  To us, Rathbone is Holmes; someone who is obsessed with the mystery at hand, is pretty much a loner, does not socialize well in a crowd, observes things that others can’t, and throughout all this is someone we never doubt is wickedly smart.  And as most of us know, he is somewhat of a bohemian, imbibing in drugs.  Perhaps nowadays psychologists would categorize him as a prodigy suffering from Asperger’s.

But what’s up with the portrayal of Dr. Watson?  Why was Nigel Bruce chosen to portray him as a buffoon?  That certainly was not how he was originally written.  He may not have been as clever as Sherlock Holmes, but he was a doctor and was intelligent.  In the stories, he was written so that Holmes could bounce ideas off him.  And as a man of science, he is one of the few men that Holmes seems to have a true fondness for.   Though for most viewers Nigel Bruce formed their vision of Dr. Watson, Holmes purists have long objected that the Watson of the books was intelligent and capable (although not an outstanding detective), and that Bruce’s portrayal made Watson far dimmer and more bumbling than his literary original. (A nickname resulting from this portrayal was “Boobus Britannicus.”

Detective writer Loren D. Estleman wrote of Bruce:  “If a mop bucket appeared in a scene, his foot would be inside it, and if by some sardonic twist of fate and the whim of director Roy William Neill he managed to stumble upon an important clue, he could be depended upon to blow his nose on it and throw it away.”

Bruce starred as Watson in all 14 films of the series and over 200 radio programs of The New Adventures of Sherlock Holmes. Although Watson often appears to be the older of the two main characters, Bruce was actually three years younger than his co-star Rathbone.

Rathbone, however, spoke highly of Bruce’s portrayal, saying that Watson was one of the screen’s most lovable characters. The Rathbone-Bruce film series lapsed with the death of producer-director Roy William Neill in 1946.  Since then, most major modern adaptations of Arthur Conan Doyle’s Sherlock Holmes stories, especially since the 1970s, have consciously defied the popular stereotype, and depicted Watson faithfully as a capable man of action.

Tentatively titled Sherlock Holmes in Peril, but soon to be rechristened The Spider Woman, this was Holmes’ first of several entanglements with various femmes fatales and possibly the best. Redeeming himself after the lacklustre Sherlock Holmes Faces Death, Bertram Millhouser wrote a lively, original script with only a suggestion of the Conan Doyle story The Adventure of the Dying Detective.

Spinning a compelling web of intrigue, The Spider Woman emerges as one of the better Sherlock Holmes adventures. The Gothic but overly genteel atmosphere of Sherlock Holmes Faces Death pales in comparison to this less stylized but more compelling yarn which quickly thrusts the viewer into the mystery. As the gruesome details of the “pajama suicides” come to light, a disturbing underbelly of corruption sets in that the film never quite shakes off.

The highlight of The Spider Woman is the malignant presence of Gale Sondergaard in the title role. Described by Holmes as a “female Moriarty”, the detective more than meets his match in the Dragon Lady of screen terror. Sondergaard is a delight, gloating and chewing up the scenery, her cold, fixed smile exuding poison with every frame. It’s more or less standard performance for the actress, who enjoyed a reputation as one of America’s leading character players.

At her scene-stealing best, Sondergaard puts on a grand show, but despite several Academy Award nominations, one suspects there’s a bit less to Gale than meets the eye. Whether playing snooty aristocrats or glum housekeepers, her performances are stamped with an icy theatricality which became ripe for parody in Bob Hope and Abbott and Costello comedies. It was a role in which the actress excelled; she could never be accused of slumming. Sondergaard displayed the same earnestness in such prestige fare as Anthony Adverse (for which she became the first person to win the Best Supporting Actress Academy Award, in 1936); The Life of Emile Zola (1937); and The Mark of Zorro (1940) as she did in Saturday matinée potboilers like The Black Cat and Gypsy Wildcat (both 1944).

The Spider Woman, at least, afforded Sondergaard with a worthwhile vehicle. She makes the most of every scene. The critics were receptive and showered the actress with notices even better than Rathbone’s. Realizing they really had something, Universal signed Sondergaard to a long-term contract before The Spider Woman wrapped in May, 1943.