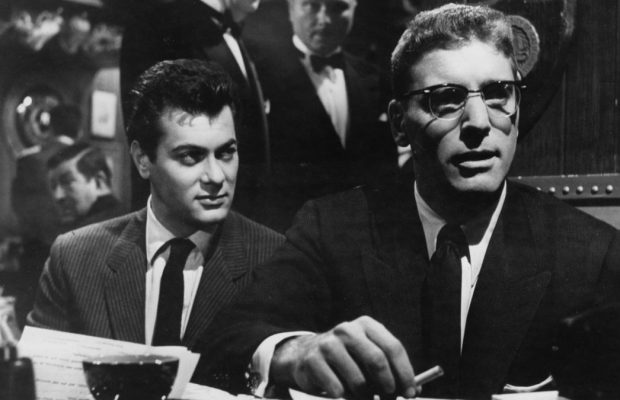 Toronto Film Society presented Sweet Smell of Success (1957) on Sunday, February 12, 1984 in a double bill with The Barretts of Wimpole Street as part of the Season 36 Sunday Afternoon Film Buffs Series “A”, Programme 7. 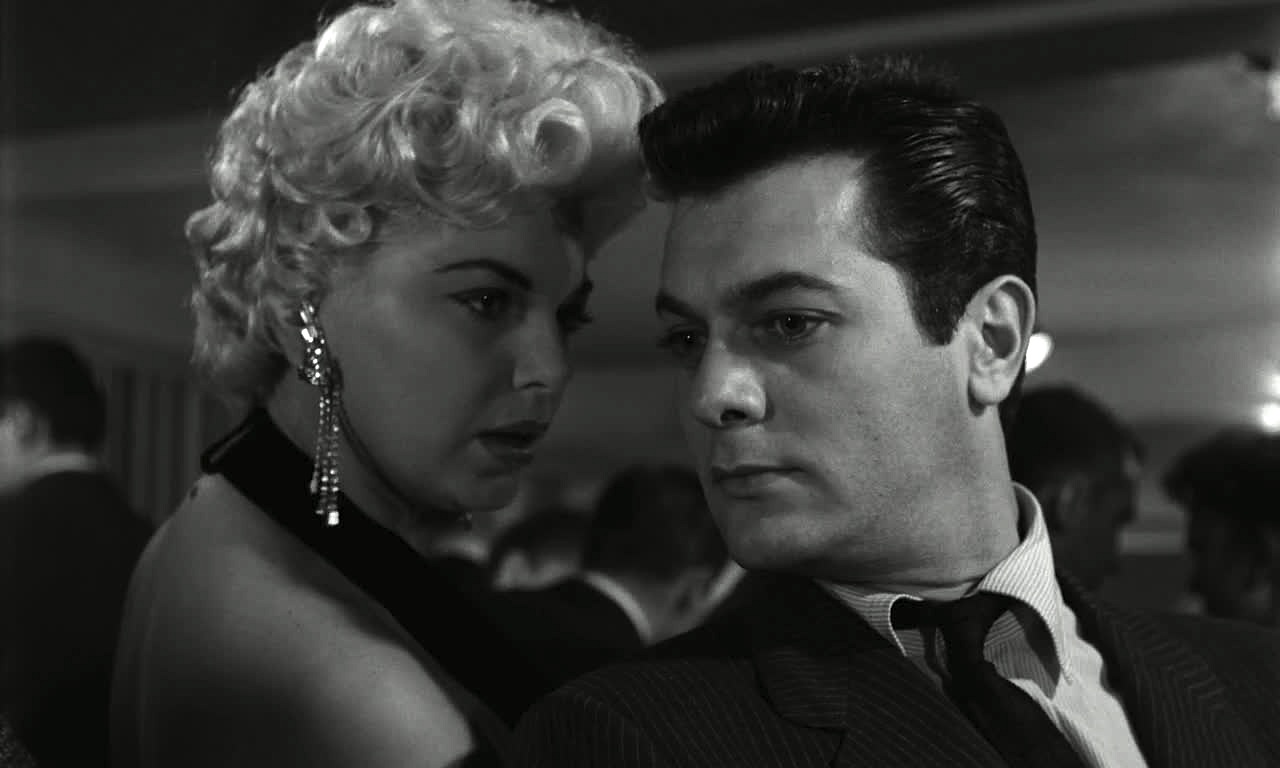 The pursuit of success–in business and in love–has always been a popular theme for Hollywood.  Accordingly, it was not surprising that Hecht-Hill-Lancaster chose such a topic for their 1957 production.  Basically, it is the story of a hustling young New York press agent (played by Tony Curtis), desperate for the berak which will propel him to the big time, and ready to take an unprincipled shortcut to reach his goal.

His means of entree into the upper strata is an arrogant, ruthless, megalomaniacal columnist and broadcaster, J.J. Hunsecker (Burt Lancaster) who scarcely deigns to notice the press agent’s existence until he needs him.  Hunsecker, who has an obsessive possession of his sister (Susand Harrison), uses Falco to break up the girl’s romance with a young musician (Martin Milner, of Route 66 fame) by framing him.  Hunsecker is a variation of that decidedly ‘fifties villain, the media-created monster.  His habitat is New York, City of Dreams, where to “make it” is to win in the ultimate arena.

Curtis was chosen by Lancaster for the part, and he more than met expectations, playing the role of the fawning, shifty, self-loathing press agent with such skill that audiences forgot about his earlier “sword and sandals” outings as Universal in such forgettable productions as The Prince Who Was A Thief a few years earlier.

Lancaster, of course, with his commanding presence, his air of absolute self-assurance, was superb as the icy columnist, supposedly modelled on Walter Winchell.  The picture dwells on the tremendous power wielded by the man, who uses his column to make and break people as it suits him.

Success was largely filmed on location in New York City, with the great cinematographer James Wong Howe behind the camera.  Howe had such classics as The Prisoner of Zenda and King’s Row to his credit.  His superb black and white photography captured the feel of New York; the glistening streets at night, the bars, Hunsecker’s penthouse, Falco’s dingy office.

Interestingly, the director of this typically American picture was a Britisher–Alexander Mackendrick, who had helmed such comedy classics as Tight Little Island and The Man In The White Suit on the other side of the Atlantic.

Sweet Smell of Success is a showcase for two superb acting talents–those of Lancaster adding another laurel to a career which had begun eleven years earlier with The Killers, and Curtis, as the success-hungry, nervously energetic Falco, more than rising to the challenge.  It is a great lose that the talents of these first-rate actors have been largely wasted in recent years.