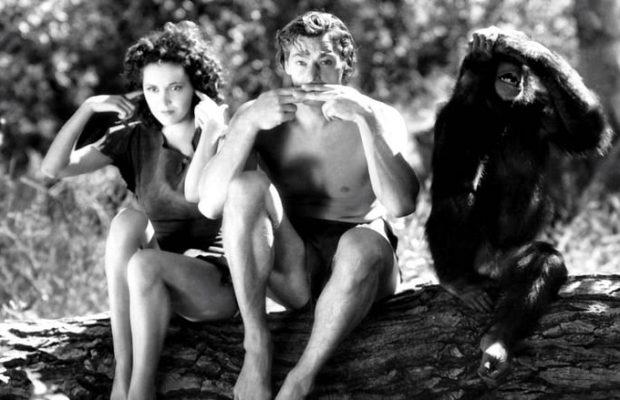 Toronto Film Society presented Tarzan Escapes (1936) on Sunday, October 28, 1984 in a double bill with North to Alaska as part of the Season 37 Sunday Afternoon Film Buffs Series “A”, Programme 3.

In 1912, Edgar Rice Burroughs created a fictional character named Tarzan, an orphaned baby of aristocratic parents who was reared by a female gorilla.  The book, Tarzan of the Apes, was a huge success, paving the author’s way to subsequent wealth and fame, and resulting in the films seen the world over.  From Elmo Lincoln in 1918 to Christopher Lambert in 1984 there have been many (official) Tarzans, but in the minds of the movie-going audience, Johnny Weismuller was the one and only Tarzan from Tarzan the Ape Man (1932) until Tarzan and the Mermaids (1948), Weismuller made a dozen ape-man movies and then went on to further success in the 1950’s as Jungle Jim (sort of a Tarzan with clothes).  Preceding Weismuller’s reign as king of the jungle were Elmo Lincoln, Gene Pollar, Jim Pierce, and Frank Merrill, the last silent and first “talkie” Tarzan, who devised the original ape-call.  During Weismuller’s reign, Buster Crabbe, Glenn Morris and Herman Brix (Bruce Bennett) all had a crack at the role, but without lasting effect.  Actually, aside from the silent films, Herman Brix’s portrayal was perhaps the only time that Tarzan was accurately depicted in films; he was mannered, cultured, soft-spoken, a well-educated English lord who spoke several languages, and didn’t grunt.  (Edgar Rice B. did not at all approve of Weismuller.)  Following Johnny came Lex Barker, Gordon Scott (one of the best), Denny Miller (one of the worst), Jock Mahoney, Mike Henry, Ron Ely, Miles O’Keefe (no argument–the worst, although the film was basically designed, if that’s the word, as a vehicle for the egregious Bo Derek, an actress (?) who, to borrow the words of the immortal Dorothy Parker, truly runs the gaumt of emotions from A to B; and finally, Christopher Lambert in this year’s Greystoke, The Legend of Tarzan, Lord of the Apes, a first-rate film.

Spoofs on Tarzan using his actual name are limited because of the strict control over the film rights of the character.  Unofficially, however, Tarzan came in for a few “knocks”.  Oddly enough, M-G-M was the first to spoof its very popular audience attraction with a short called Nature in the Wrong (1932) with Charlie Chase, a skinny, bespectacled, milquetoast comedian, the antithesis of Weismuller.  In Hollywood Party (1934), Jimmy Durante appeared as “Schnarzan” with Phyllis Crane in a oversized fig leaf as his mate.  In 1975, a vulgar and unfunny French-Belgian co-production called Shame of the Jungle as released as an R-rated cartoon spoof.  Outside North America, control over the character is harder to maintain.  The earliest known unauthorized Tarzan movie was The Adventures of Chinese Tarzan (1940).  The ape-man was portrayed by one Peng Fei and Lee Cha Cha appeared as Jane Porter.  Although the picture played to long lines in Shanghai, no sequels materialized!

As even more bizarre case occurred with a Turkish Tarzan film.  When screened, it turned out to be Tarzan’s Revenge (1938) with Glenn Morris.  The Turks had dubbed it and ingeniously cut in the face of a Turkish actor whenever a close-up of Morris appeared.  An Indian movie company cranked out ten Tarzan films between 1963 and 1956 using an Indian wrestler named Darasingh and also someone named Azad, with the “beautiful Chitra” as his mate.  Can Cheech and Chong be far behind?

Getting back to the Tarzan, Weismuller was discovered by screen-writer Cyril Hume in 1931.  The 1924 and 1928 Olympic champion was a natural for the part.  He was a champion athlete who had retired undefeated with five Olympic gold medals, sixty-seven world and fifty-two national titles.  Director W.S. Van Dyke was looking for a new ape-man and had dismissed Charles Bickford (“not young enough”), Joel McCrea (“never heard of him”), Johnny Mack Brown (“not tall enough”), and Clark Gable (“he has no body“).  Weismuller was definitely his choice for Tarzan, and for O’Sullivan, the perfect mate.  They made six Tarzan pictures together, today’s being number three.  Tarzan Escapes, which began life as The Capture of Tarzan, was originally directed by James McKay and was an exciting epic with many gruesome scenes.  Screened in 1935 to preview audiences, the film terrified children and outraged their parents.  The studio back-pedaled and ordered all gruesome scenes out and replaced with retakes.  Director McKay opposed this–exit McKay.  John Farrow replaced him and ended up marrying Miss O’Sullivan.  The studio was still unhappy with the picture and gave it over to Richard Thorpe who apparently met with approval as he went on to direct the rest of the M-G-M series.