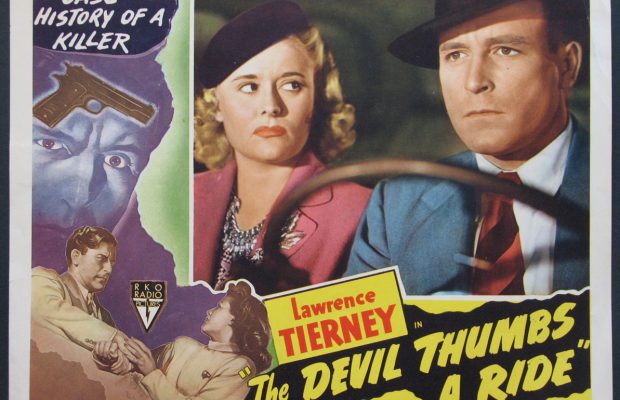 Toronto Film Society presented The Devil Thumbs a Ride (1947) on Monday, July 9, 2018 in a double bill with Hell on Frisco Bay as part of the Season 71 Summer Series, Programme 1. 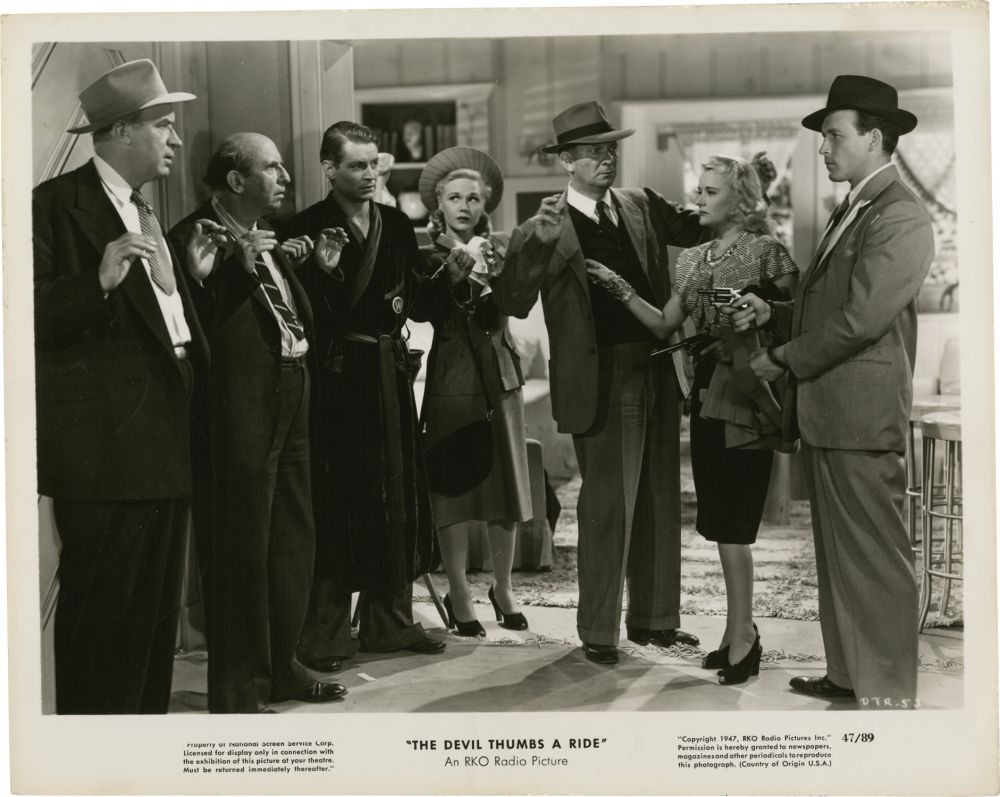 What else can be said about Lawrence Tierney’s personality that hadn’t been mentioned when TFS screened Born to Kill during last year’s Summer Series?  He was a difficult person who was constantly getting in trouble with the law, mostly because when he drank—and he was a big drinker—he turned violent.

Born in Brooklyn, New York on March 15, 1919, he was ironically one of three sons of the chief of police of the New York Aqueduct Guards.  He was followed onto the screen by his two brothers, Scott Brady and the lesser-known Edward Tierney.

Lawrence was a top student and star sportsman at Boys’ High School in Brooklyn, winning an athletic scholarship to Manhattan College.  After two years, he quit to take the dangerous job of sandhog, working to excavate the Hudson River Tunnel.

There are two accounts of how he entered the acting business.  The first is that he was waiting for a female companion one night outside a theatre stage entrance when the manager spotted him, mistook him for an actor, and offered him a job on the spot.  Later, while performing a bit part in a play produced by a New York experimental acting group called the Blackfriars, Tierney was seen by an RKO talent scout who arranged a screen test, which led to a contract.  The second version claims that while Tierney took a modeling job with the John Powers agency as a lark, a co-worker asked him to accompany him to the New York’s RKO offices and that’s where Tierney was tested, signed up and shipped off to Hollywood.

The Devil Thumbs a Ride is based on the novel of the same name by author Robert C. DuSoe.  Although the film itself manages to convey an appropriate uncomfortable, nervous feel to its viewers, still, the novel had some unsavory action and dialogue that wouldn’t have ever made it to the film.  One that I hope may be of interest to this audience is when Ted North and Tierney offer Nan Leslie and Betty Lawford a ride.  In the book, the two women are named Agnes and Mabel.  When the Tierney character hears this, he remarks that all they need now is a third woman named “Beckey”.  This was a reference to a popular brand of condoms called 3 Merry Widows sold during the 1920s and 30s.  These objects were contained in a small, round canister with the names Agnes, Mabel and Beckie embossed on the tin’s cover.  I’m sure even if Nan Leslie’s character’s name had not been changed from Mabel to Carol in the film, the censor board would have cut that line and the women’s reactions out although today that little piece of info would have gone past most of our heads!

A cute little tidbit that is very light compared to the heaviness of the scene involved, appeared in The Sunday Herald on August 18, 1946 stating that, “Ted North had to use a vacuum sweeper, Nan Leslie had to wash dishes and Betty Lawford had to cook a meal during a sequence for RKO Radio’s The Devil Thumbs a Ride.  It soon became apparent that all are rank amateurs as far as housekeeping is concerned.  The final straw came when Betty, trying to fry eggs sunny-side up, broke yolks and got egg shells in the pan.  ‘Give her a spoon so she can finish making them scrambled eggs,’ said Director Felix Feist.  ‘Now I know why they call it domestic science.’”

What did audiences think of the unrelentingly odd and hellish RKO production The Devil Thumbs a Ride when it was released in 1947? As the lower half of a double-bill, it played alongside such innocuous fare as the Tracy/Hepburn western The Sea of Grass; the Dane Clark/Martha Vickers comedy That Way with Women; Loretta Young in The Farmer’s Daughter; and, believe it or not, Love Laughs at Andy Hardy(!). We have no way of knowing the answer to this question, although some of the contemporaneous critics may give us an indication of the discomfort it caused. The New York Times succinctly stated: “It is pictures like this which give the movies a black eye and give us a pain in the neck.” Donald Kirkley of The Baltimore Sun wrote, “Like most of these killer-dillers, the story seems to have been concocted by a backward fugitive from a third-rate reform school.” Both evaluations are fair; there is a sense, watching the movie, that the devil is also thumbing his nose at the Production Code Administration.

Anytime Lawrence Tierney is present, whether on-screen or in real life, violence is just around the corner. I’ve compared them side by side and, incredibly, Tierney’s rap sheet is the exact same length as his filmography—Drunk and Disorderly, Dillinger (1945); Cruelty to Animals, Born to Kill (1947); Battery, Shakedown (1950); Burglary, The Hoodlum (1951); etc. The Devil Thumbs a Ride was produced in the height of his fame, which came from the surprising success of his portrayal of John Dillinger in the 1945 Poverty Row classic. Tierney managed to stay out of trouble during its short production schedule. Although his erratic off-screen behaviour eventually torched nearly every bridge he encountered, Tierney did recall The Devil Thumbs a Ride director Felix E. Feist with kindness in a 1990 interview with Psychotronic Video Magazine (best if read in gravelly Brooklynese): “One day I’m talking to Felix Feist about something in the film and I said to him as we were arguing, ‘Felix, what are you trying to do, Jew me down?’ And he said, ‘Well, what are you trying to do, Gentile me up?’ Felix was a funny guy, a nice guy.” These were perhaps the sweetest words that this brawler/actor ever said.

The aforementioned “backward fugitive” responsible for this story is Robert Coleman du Soe. (As if to complicate future research, he often goes by Bob and, depending on the source, his surname can appear as Du Soe, DuSoe, or Dusoe.) Very little information is available on him; an obituary from 1958 provides scant detail: Born in Los Angeles in 1894, he was a veteran of World Wars I and II, ultimately serving as a commander in the U.S. Navy. Besides a workaday job as a newspaper advertisement salesman, he penned adventure stories and serials, often aimed at a youth audience. The novel “The Devil Thumbs a Ride”, originally published in 1938, seems to be a debauched anomaly in his career. The boozy tale of a psychopathic payroll thief and two good-time gals who hitch a ride with a lecherous salesman of women’s hosiery is intact in the novel. Besides toning down some of the excesses (including making Ted North’s character a more sympathetic hapless dupe), what director/screenwriter Feist did in his first credited feature screenplay was condense the novel’s timeframe and shift it almost entirely to the dark of night. The first shot of the film, significantly, is a clock outside a bank, its hands already past midnight. Clocks and watches appear throughout the film, each a reminder that, in the immortal words of Arch Oboler’s [radio program] Lights Out, “It … is … later … than … you … think!”

With Val Lewton’s productions well underway, RKO was familiar with strangeness. The Devil Thumbs a Ride gives those overtly supernatural movies a run for their money. In its blistering 62-minute runtime, there are bizarre touches at every turn: The booze with a bottle nipple; the cuckold newlywed husband with an especially unconvincing toupee; and the gas station attendant with a funny looking daughter (“By the looks of those ears, she’s going to fly before she walks.”) and a preternatural ability to count cards. The gnarled uncredited actor as Nate Miller briefly pushes the film into the realm of freakishness—was he plucked off skid row? But it’s Tierney’s that commands attention. This soulless creature who flatters, cajoles, demeans, and commits acts of violence is dangerously attractive.