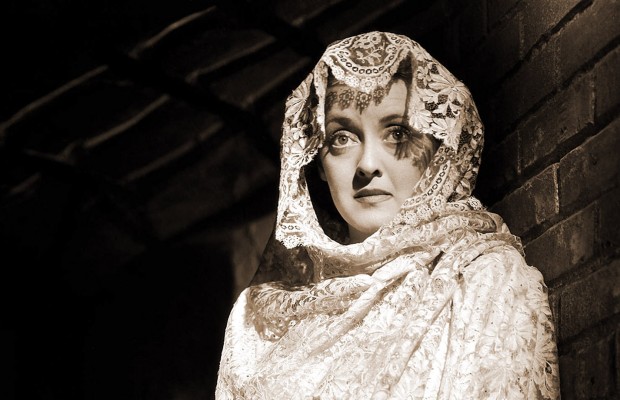 Toronto Film Society presented The Letter (1940) on Monday, October 25, 1976 in a double bill with The Window as part of the Season 29 Monday Evening Film Buff Series, Programme 1.

“Robert will be away for the night.  I absolutely must see you.  I shall expect you at eleven.  I am desperate and, if you don’t come, I won’t answer for the consequences.” – Bette Davis as Leslie Crosbie in The Letter

Many think The Letter contains William Wyler’s best direction and some regard it as his best picture.  It is certainly a good example of how a stage play should be adapted to the screen, and how proficient actors can be effectively orchestrated by a knowing director.  The Letter‘s opening scene establishes without a word of dialogue of the milieu, the central character and the problem.  We are in a plantation house; a white cockatoo flaps from a fence; a man stumbles out of the bungalow and as he attempts to crawl away a woman walks out firing and firing all the bullets remaining in her revolver into the white-coated figure of her lover.  She looks up at the moon, her eyes haunted, shining with its light.  The way Wyler enables us to learn that this killing was not in self-defense, as the woman claims, but one of passion and vengeance, is melodrama at its best.

From this opening sequence on, the direction is masterly, expertly blending theatre and film techniques.  Maugham’s true-life story of a planter’s wife who kills her lover and is saved from death by a tormented counsel had already made a vehicle for Gladys Cooper on the London Stage, for Katharine Cornell on Broadway and for Jeanne Eagles in an early sound film.  (In Paramount’s 1929 version, Herbert Marshall, the husband in the 1940 film, played the murdered lover.  A third version made by Warners in 1947 was titled The Unfaithful with Ann Sheridan).  Two motifs bind the work together: the moon, which holds an intense fascination for the murderess, who returns to look at it again and again through the blinds of her room and who gazes up at it every time she undertakes a nocturnal visit; and her lace, stitched oval by tiny oval through trial and subsequent confession, at once a symbol of her amazing will-power–her ability to build piece by piece a complex pattern of deceit–and a method by which she steadies her nerves to face the ordeal.  The two motifs unite at the end where, in the moonlit garden, the completed lace drifts in a breeze from the chair where she sat.

The mise en scène, photographed in torrid dark images by Tony Gaudio, is made up of exotic details: whirling fans, gin slings clinking in tall glasses, palm-leaves, a complex pattern of shadows, pools of moonlight, white faces and burning lamps at dusk.  The cunning blend of exotic mood lighting and atmospheric camera images captures the steamy and faintly sinister setting of rustling leaves and moonlight.  And–always enforcing the emotional undercurrents of the plot–Max Steiner’s score, largely supported by a two-note “fate” theme.

The cast is notable.  Bette Davis and James Stephenson as the trial lawyer act together with extraordinary intensity: she flinging herself on his mercy, he fighting against his conscience.  Bette Davis as the adulterous wife gives what is arguably her best study in neurotic compulsion.  Deceit becomes her.  It sharpens her femininity.  She never seems so desirable as when she is lying her way out of a crisis and falling back on wiles and pleas that are pitched towards the male whom she basically despises and mistrusts.

In her review of The Letter Pauline Kael states “Davis gives what is very likely the best study of female sexual hypocrisy in film history…helped by two excellent performances, James Stephenson as her lawyer and Herbert Marshall as her husband (it is one of his few commendable acting jobs in a career of staggering mediocrity).”  Gale Sondergaard as the Eurasian wife of the slain man is breathtakingly sinister.  Her confrontation scene with Davis is a crucial one.  When Davis accompanies the go-between to the shop of the Eurasian wife (to buy back the incriminating letter) the atmosphere is charged with emotion.  It was a very difficult scene because the Eurasian does not speak English, only guttural Malay: hatred must emanate from every pore.  Her contempt is shown when she drops the letter to the floor and Davis must bend down at her feet to retrieve it.  No theme music is used here but instead, contrapuntal accompaniment to the dramatics is memorably provided by the sound of wind chimes, jingling ominously.  It is a brilliant touch in creating and heightening suspense.

The film was not all clear sailing as director and leading lady clashed head-on over the ending.  When Robert Crosbie offers a sad forgiveness and his wife rejects this pitiable gift of love and charity with “I still love the man I killed”, Bette Davis felt that she could not tell it to Herbert Marshall’s face.  She could not conceive of any woman looking into her husband’s and admitting such a brutal truth.  Wyler disagreed.  Because of the very brutality of what she says, it must be said straight to his face.  Turning away and saying it under her breath would soften the blow and, he felt, in that case, the line should never be uttered at all.  Davis walked off the set, something she had never done in her career.  “I could not see it his way, nor he mine”.  She was to write in her autobiography “I came back eventually–end result, I did it his way.  It played validly heaven knows, but to this day I think my way was the right way”.  Wyler always remained convinced he was right.

Davis completely credits Wyler for The Letter‘s success and states in her book, “I lost a battle but I lost it to a genius.  So many directors were such weak sisters that I would have to take over.  Uncreative, unsure of themselves, frightened to death to fight back, they offered me none of the security that this tyrant did”.

Both Bette Davis and William Wyler were nominated for Academy Awards but she lost out to Ginger Rogers for Kitty Foyle and he to John Ford for Grapes of Wrath.