Toronto Film Society presented The Lodger (1944) on Monday, August 20, 2018 in a double bill with The Pearl of Death as part of the Season 71 Summer Series, Programme 6. 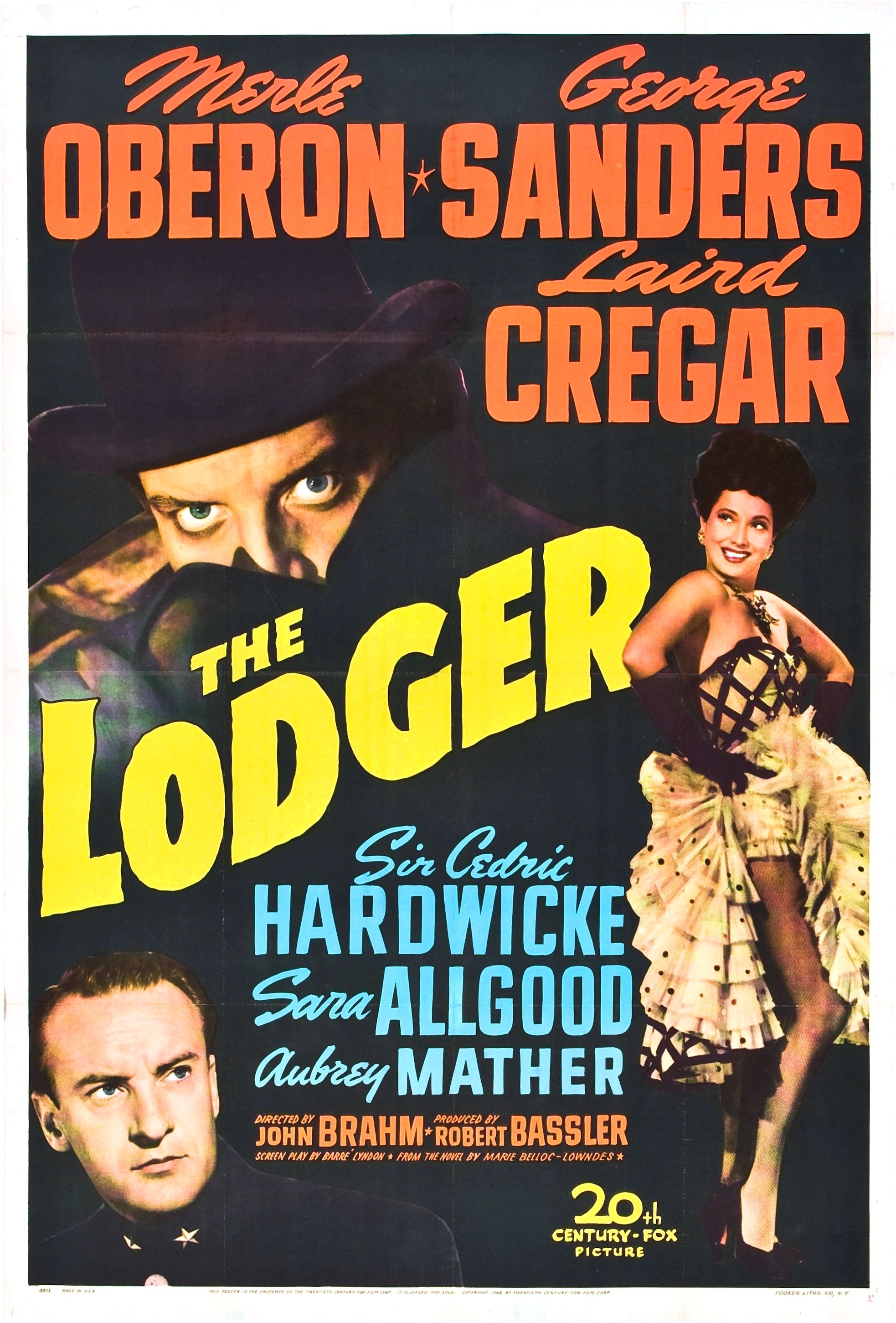 Laird Cregar was born Samuel Laird Cregar, his friends calling him Sammy.  Off-screen he was a gay Gargantua, with his larger-than-life humour, affection and audacity at times skirting scandal.  But on-screen, he reveled in portraying offbeat, sexually charged villains.

Gossip hounded him, and Cregar usually volleyed with a line from Oscar Wild, the play that had launched his film colony fame in 1940: “It is perfectly monstrous the way people say things against one behind one’s back that are absolutely true.”

He’d always dreamed of being a full-fledged movie star ever since he was a little boy in Philadelphia and was terrific as the prissy, peppermint-gobbling villain in This Gun for Hire, and had played Satan himself in Ernst Lubitsch’s romantic fantasy Heaven Can Wait—Lucifer, in Technicolor.

It was as Jack the Ripper that Laird Cregar fully pounced into stardom, slyly crafting a performance that the New York Herald-Tribune review called “a Krafft-Ebing* case history of a sex maniac.”  Cregar’s Ripper conveyed a love for his dead brother that was not only homosexual, but incestuous; his scenes with Merle Oberon were tautly tense, and his delivery had the scent of necrophilia.

Tragically, in the midst of the shooting of The Lodger, Laird’s close friend David Bacon, star of the serial The Masked Marvel, (which incidentally for me was screened in its entirety at Cinevent this past May) had been murdered; like the Ripper, the killer had used a knife.  In the sordid murder’s wake, complete with sagas of a male brothel-by-the-beach, Bacon’s wife, Austrian singer Greta Keller, had suffered a miscarriage.  Laird had taken her into his cottage high on Coldwater Canyon, and nursed her back to health.

Had the personal impact of a real-life knife murder on Cregar’s powerhouse portrayal been too strong?  Was Cregar’s un-closeted Ripper too intense?  If so, would audiences ever accept him on-screen as anyone but a raging psycho?  If not, could he handle it?

John Brahm directed The Lodger with a Germanic, Expressionistic flourish, planning many of his shots via elaborate storyboards.  He could be egotistical and demanding, but he also had a sense of humour.  He and Laird collaborated closely and amiably.

Brahm’s daughter Sumishta Brahm recalled, “He admired Laird Cregar and had great sympathy for him.  He knew he was homosexual, and that was a bad time to be publicly so inclined.”

Perhaps partly due to this sympathy, Brahm let Laird loose, admiring the unbridled passion of Laird’s Ripper portrayal.  The director found that Laird “couldn’t wait to get to work each day.”  They’d join in lengthy consultation with cinematographer Lucien Ballard, about possibilities with the camera; and most of all, he seemingly delighted in peppering the performance with all variety of “depravity.”

On September 3, Variety reported that a black widow spider had crept onto the set of The Lodger the previous day and bitten Ballard who was “removed immediately to hospital for serum treatment.”  It seemed to suit the atmosphere, where Laird was creating one of the most fascinating monsters in Hollywood history.

* Richard Freiherr von Krafft-Ebing was an Austro–German psychiatrist and author of the foundational work Psychopathia Sexualis (1886). 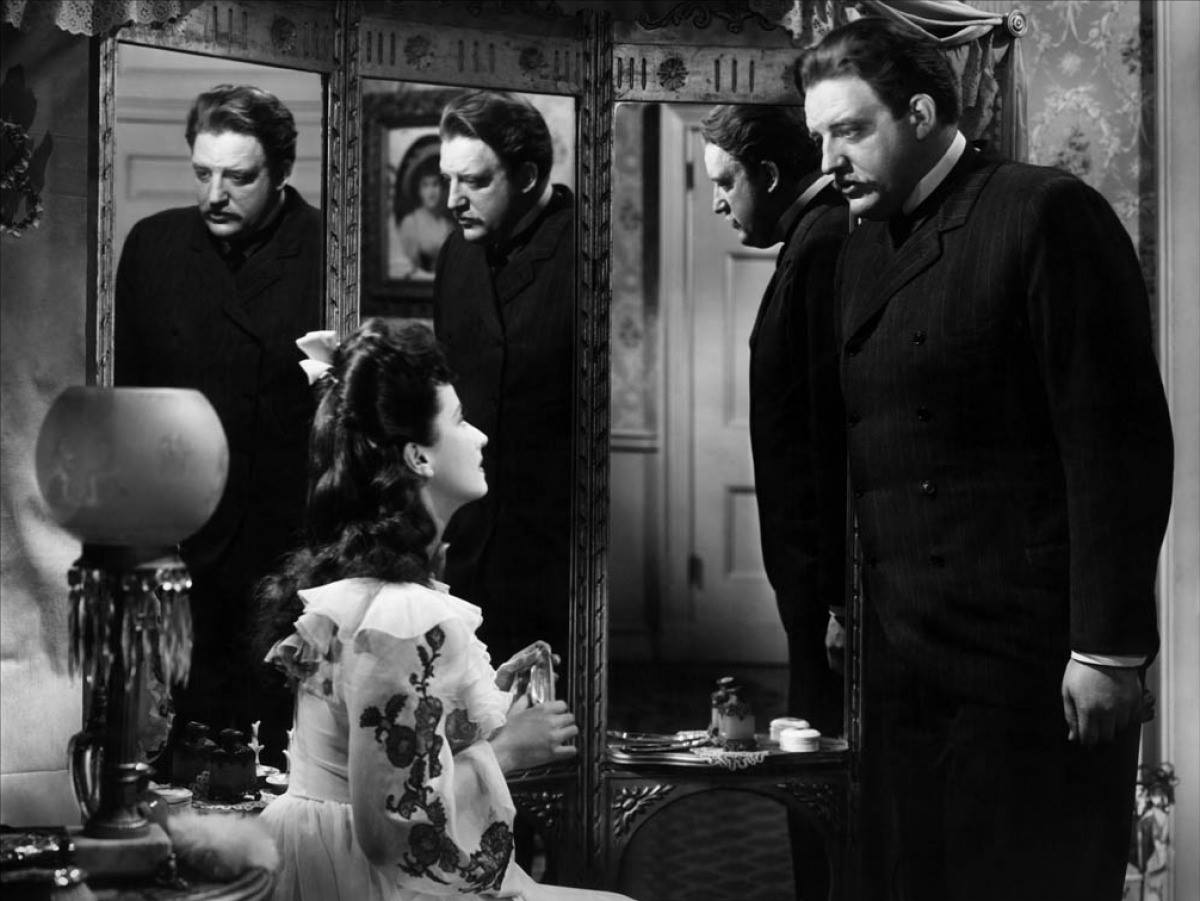 The Lodger is a 1944 suspense film set in London. Slade (Cregar) plays a serial killer and is a lodger in a 19th-century family’s London home. Also a lodger at the same time in the same house is a singer named Kitty Langley (Oberon). Because of her looks and wit, Slade has a keen interest in her. Women are being brutally killed in the Whitechapel district. Scotland Yard is investigating and a detective, John Warwick (Sanders), begins to cast his suspicions in Slade’s direction. Kitty, meanwhile, has also developed an attraction to Slade. Slade goes to see her perform at a cabaret. He goes backstage afterward and tries to make her his next victim, but Warwick’s men get there just in time. Unwilling to be taken into police custody, Slade flees to the riverbank and leaps to his death.

As for commentary, George Sanders is worthy of some discussion. Born in the Russian Empire in 1906, his parents fled to England in 1917, at the outbreak of the Russian Revolution. With a long career in the entertainment world, Sanders was an actor in over 100 films and several television shows, as well as an author, singer/songwriter, and music composer. As an actor, he won an Academy Award in 1950, playing the role of Addison DeWitt in the movie All About Eve. Among his many wives, he was married to Zsa Zsa Gabor and later to her elder sister, Magna Gabor. This was to be his final marriage and it lasted only 57 days. He died of a barbiturate overdose at the age of 65, while visiting Spain in 1972. He left behind three suicide notes, one of which read: “Dear World, I am leaving because I am bored. I feel I have lived long enough. I am leaving you with your worries in this sweet cesspool. Good luck.” Perhaps it is better to go gently into that good night, rather than to fade away. George Sanders has two stars on the Hollywood Walk of Fame: one for film work and one for television work.