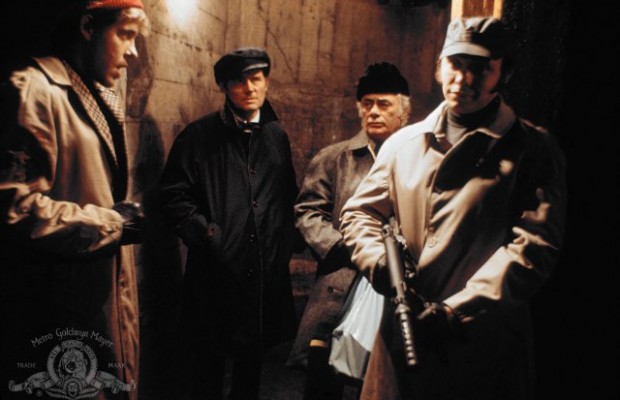 Toronto Film Society presented The Taking of Pelham One Two Three (1932) on Monday, August 17, 2015 in a double bill with Me and My Gal as part of the Season 68 Monday Summer Series, Programme 6.

It’s been a while since we’ve had a movie that really catches the mood of New York and New Yorkers. The crisis mentality of what Henry James called “the vast hot pot”—which was revealed when numerous natives were convinced that they alone had caused the great November blackout of 1965—or the New York brand of logic that surfaced when a taxi driver shouted, “If we can get rid of Lindsay, we can get rid of the traffic!” is reflected in The Taking of Pelham One Two Three. The picture, directed by Joseph Sargent, opened yesterday at the 86th Street East and the Criterion Theater.

Walter Matthau’s best caustic energies erupt as a Transit Authority lieutenant, and Peter Stone’s script abounds with dialogue that’s just right for this actor’s benign bad temper. (Surely no one can say “Gesundheit!” to a sneezer quite so aggressively as Mr. Matthau.)

Martin Balsam and Robert Shaw—one glazed with a sleazy regret, the other endowed with a calm brutality—are all too likely as your typical rush-hour hijackers. Lee Wallace makes a pleasing, indecisive slob of a Mayor—aware that he’ll be booed by any random crowd—and Tom Pedi is particularly good as an outraged official who can’t tolerate a mess or a mystery in the subway. The bullying Deputy Mayor (Tony Roberts) unleashes a line that does sound just like home: “We’re trying to run a city, not a goddam democracy!”

Throughout, there’s a skillful balance between the vulnerability of New Yorkers and the drastic, provocative sense of comedy that thrives all over our sidewalks. And the hijacking seems like a perfectly probable event for this town. (Perhaps the only element of fantasy is the implication that the city’s departments could function so smoothly together.) Meanwhile, the movie adds up to a fine piece of reporting—and it’s the only action picture I’ve seen this year that has a rousing plot. – NY Times