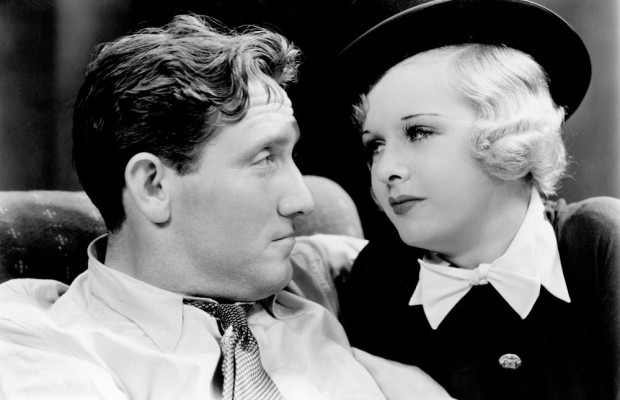 Toronto Film Society presented Me and My Gal (1932) on Monday, August 17, 2015 in a double bill with The Taking of Pelham One Two Three as part of the Season 68 Monday Summer Series, Programme 6.

Me and My Gal is the story of an impromptu love triangle (sort of) that occurs when a cop (Tracy) falls for a waitress (Bennett) whose sister falls for gangster (Walsh) who is about to be brought down by the afore mentioned cop. Romance and comedy ensue as this unlikely scenario unfolds.

Wholly entertaining film blending comedy, romance, melodrama in one neat package; cop Tracy falls in love with waitress Bennett, whose sister and father become involved with a gangster. Stars at their most charming, with bottomless reserve of snappy dialogue. – Leonard Maltin

Raoul Walsh, who numbers among his pictorial works “What Price Glory” and “The Cock-Eyed World,” is responsible for the direction of “Me and My Gal,” a racy combination of comedy and melodrama which lives up to what one might expect from the title. Although it is slangy, it has the advantage of Mr. Walsh’s vigorous imagination and bright lines.

Besides Spencer Tracy and Joan Bennett, there is in the cast Mr. Walsh’s brother, George, who several years ago acted stalwart heroes, but who here is called upon to portray the part of a desperado. Mr. Tracy plays Dan Dolan, a policeman who is smitten by the undeniable charms of Helen Reilly (Miss Bennett). Both Mr. Tracy and Miss Bennett speak their lines effectively, with the result that there was a good deal of laughter in the Roxy yesterday afternoon.

gum throughout most of the scenes, is very attractive and she gives a vivacious performance. Mr. Tracy is alert and efficient in his role. George Walsh is sufficiently menacing as Duke and Marion Burns makes the most of the part of Helen’s dull sister.

There is also on the screen an amusing “Silly Symphony” cartoon called “Bugs in Love.” – N.Y. Times

In her memoir (written with Lois Kibbee), Bennett wrote that Me and My Gal was the only memorable film of the six she made in 1932. Of Spencer Tracy, she wrote:

“Working with [him] was a huge treat. I remember him as a rather private person, taciturn, though he had a delicious sense of humor. He teased me unmercifully, and it always pleased him when I rose to the bait, which was most of the time. There was one thing that seemed contradictory to his rugged screen image: he dressed impeccably, sartorially splendid at all times.“

“Spencer was known in Hollywood as an ‘actor’s actor,’ and his intense powers of concentration were legendary. I never had the feeling that he was acting, but that the truth of the scene occurred at the very moment he spoke, and no matter how many times we repeated a scene, that spontaneity was always there. Like George Arliss, he was extremely meticulous in his work and methodical in his schedule. He took two hours for lunch and quit every day at five o’clock, and that was that. I worked with Spencer several times after that, and it was always stimulating and rewarding for me.” – TCM