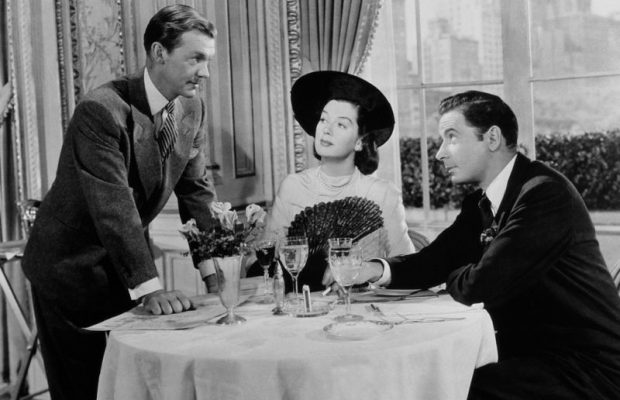 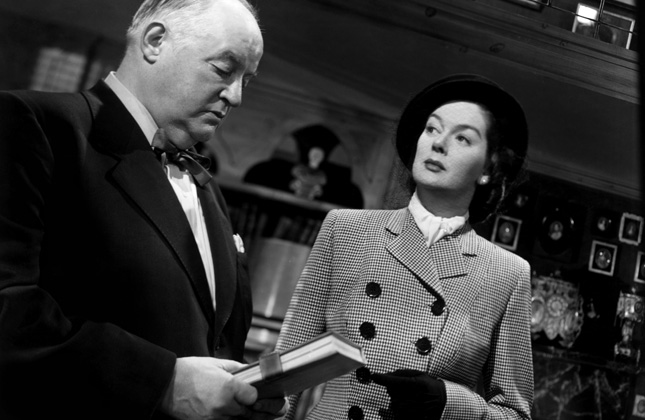 The storyline of The Velvet Touch is Russell playing a middle-aged Broadway leading lady trying to break away from her light comic plays and act in something “serious”. She has an argument with her former love—lecherous producer Gordon Dunning (Leon Ames)—after a performance. Russell kills him with a blunt blow on the head with a Tony Award. Once she realizes what she’s done, she quickly exits the backstage of the packed theatre. She, all shifty-eyed and nervous after the killing, rushes through coworkers and fans and gets into her limo. She successfully exits the theatre before the body is found. It’s amazing that no one suspects her of the crime. Russell pulls off a unique performance—appearing guilty and looking down her nose at people at the same time. She is trying to play the part as a hammy actor trying to keep her cool. However, all these acting tricks actually make her character annoying and unlikeable.

This melodrama is considered “film noir”; probably due to the crime, the lengthy flashback at the beginning of the film, and the shadowy shots at Russell’s apartment after the killing. Cinematographer Joseph Walker worked on other noir-like films, including The Dark Past, The Lady from Shanghai, Harriet Craig, The Mob, and Affair in Trinidad. He makes New York City’s Broadway seem a nighttime world filled with glamorous people and bright lights. Unfortunately, it’s not as dank as you would expect from a film noir. A better “Broadway noir” would be the outstanding A Double Life, released in theatres just six months earlier. Ronald Colman—playing a cracked Shakespearean actor a little too into the characters he plays—kills a loud-mouth waitress from the wrong side of the tracks (Shelley Winters). Edmond O’Brien plays an enterprising press agent. Winters, Colman, and O’Brien bring just enough grit to make the stagey film a superior noir. However, The Velvet Touch—even with its shortcomings—is not without charm. The film’s worth seeing for one of the “Queens of Film Noir”: Claire Trevor—always a welcome sight—and the giant known as Sydney Greenstreet. Though the film possesses less of the sophistication and psychological angst of the other films, Velvet Touch is still a fine movie, lovely to look at, and with some really solid performances.

Sydney Greenstreet ranked among Hollywood’s consummate character actors; a classic rogue whose villainous turns in motion pictures like Casablanca and The Maltese Falcon remain among the most memorable and enigmatic depictions of evil ever captured on film. Never a leading man, Greenstreet was always up to the task of playing a questionable character that the audience could not identify with. In 1902, he made his theatrical début portraying a murderer in Sherlock Holmes, and two years later, he traveled with Ben Greet’s Shakespearean company to the United States. After making his Broadway début in Everyman, Greenstreet’s American residency continued for the rest of his life. Sydney Greenstreet remained exclusively a theatrical performer for over three decades. In 1940, Greenstreet met John Huston, who requested that he play the ruthless Kasper Gutman in his 1941 film adaptation of Dashiell Hammett’s The Maltese Falcon. A heavy, imposing man, Greenstreet was perfectly cast as the massive yet strangely effete Gutman, a dignified dandy who was in truth the very essence of malevolence. Making his film début at the age of 62, he appeared alongside the two actors with whom he would be forever connected—star Humphrey Bogart and fellow character actor Peter Lorre. The acclaim afforded Sydney Greenstreet to have a successful career, and The Maltese Falcon earned him a long-term contract with Warner Bros. After appearing in They Died with Their Boots On, he again played opposite Bogart in 1942’s Across the Pacific. In 1942, he appeared briefly in Casablanca, another reunion with Bogart as well as Lorre. When Greenstreet and Lorre reteamed in 1943’s Background in Danger, their fate was sealed, and they appeared together numerous other times. In 1952, he announced his retirement, and died two years later, on January 18, 1954.